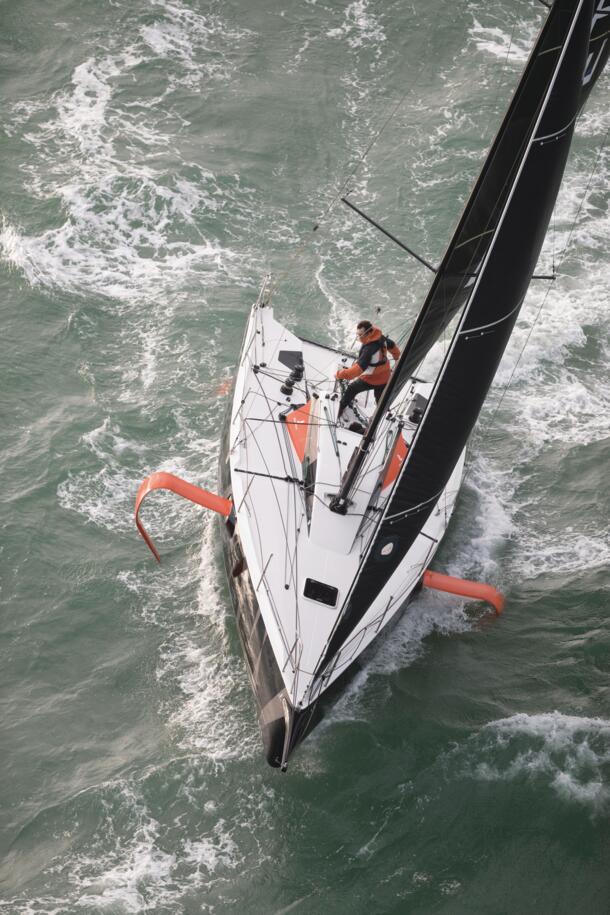 Have you ever wondered how new ideas find their way into yacht design?

I recall advice given to me in the late 1960s by an old marine engineer who owned a long-keeled cruiser/racing yacht. It was on the hardstand next to what was then a radical new design: an S&S34. Knowing that I was a budding yacht designer, he pointed to the S&S34’s separate fin keel and said, “See that? It’s unsound engineering to hang a lump of lead off the bottom of a plastic hull. It’ll never catch on.”

How wrong he was in hindsight, but why? I believe it is because engineering on its own can often constrain ideas, but when the idea is turned into a design, the engineer has little option but to sort it out so that it works.

And there lies the happy marriage between engineering and design.

Now consider how the typical trickle-down effect of new design development has rolled through the layers of sailing: from specialised craft such as the America’s Cup etc., to high performance racers, to standard racer/cruisers and
then into a bluewater cruising yacht.

This is more or less the path followed by developments such as: fin keels, asymmetric spinnakers and bowsprit prodders. Roller furling headsails went straight from specialised short-handed racers to cruisers, skipping the high performance fully-crewed racers, as did the winged keel.

But the general path is common.

So where are we up to with foils? Specialised foil-supported yachts have been around since the late 1960s but they did not trickle down to high performance racers until the last five years or so; they had been around in dinghies for longer.

The introduction last year of the ten metre Figaro Beneteau 3 foil-assisted, short-handed offshore racer has been a paradigm shift. This is a full ocean-going EU Category A classified yacht.

It has to be sailed on overnight passages in all weathers, manoeuvre in and out of marina berths and be generally capable of doing the things that many cruising yachts have to do.

The foils stick out of the sides and are C-shaped, retractable when coming into harbour so they fit snugly against the hull at around the maximum beam position.

Not very convenient for cruising, but workable.

Then there is the dynamic stability system (DSS) invented ten years ago. This is a horizontal foil that sticks out from the leeward side of the hull just below the waterline. It can be slid across to the other side when tacking, inside a cassette that lies under the cabin sole. Again, not very cruisey, but workable.

People probably had similar reservations about centreboards when they were first used in cruising yachts.

How do foils work?

What is a foil trying to do? It is designed to either increase the sail carrying power, known as righting moment, or lift the hull partially out of the water to reduce drag, or a bit of both. This requires the foil to generate lift force.

In order to work out whether foils are likely to work on a cruising yacht we need to understand the relationships between the forces created by the foil, the speed of the boat and the weight of the boat.

In contrast, if you increase the foil area by 20% then the lift increases by only 20%, i.e. this is only a linear relationship, not a square one.

There is an almost inescapable consequence of creating lift: you generate drag. This type of drag is unimaginatively called induced drag, because it is induced by the creation of lift. The induced drag varies with lift squared, e.g. if you double the lift you end up with four times the induced drag.

How much lift do we need to generate? In order to lift the hull out of the water the foil has to generate enough lift to support the entire weight of the boat. Plus, in order to provide useful righting moment, it has to do as much stability work as the keel.

If you pick out the important points from the above explanation, they are:

That is, more or less, all the theory we need to know in order to work out whether we will see foils on cruising boats.

Why do we want to do this? Increasing sail carrying power has an obvious advantage of greater speed and stability. It is achieved by angling the foil to the water, such that the generated lift is opposing the heeling force from the sails.

This is not a new idea, not even in cruising boats. In 1980 the young Southampton naval architect Malcolm Barnsley, designer of world sailing speed record holder Sail Rocket 2, designed and built a 5.5m foiling trimaran in which he cruised the south coast of England.

It was, however, rather small and specialised.

So it was not until recently that foil stability has become popular in racing yachts. Good ideas can take time to evolve!

The main reason for the slow adoption of foil-assisted stability is that basic law of foil theory: the lighter the boat, the less lift required. Hull designs had to become lighter and hence faster, before foils could become effective and this was not generally possible until the advent of carbon fibre and lighter construction methods.

Lifting the hull out of the water gets rid of almost all the wave-making drag, plus a lot of friction drag, which together amount to most of the drag of a normal yacht hull.

As racing boats have become lighter, due mainly to the application of new materials like carbon fibre, the foil does not have to produce so much lift, therefore it can be smaller and also have less drag. Then the boat will travel faster, so the foil can be even smaller, so less drag again. So it will go faster again, so the foil can be smaller etc. and so on; i.e. once you have a boat that is light enough, the foils suddenly become an efficient design option.

It follows, therefore, that for foils to be a design option for a cruising boat, the boat has to be light and quite fast. It is noteworthy that the foiling Figaro 3 is 10m long but weighs less than three tons; that is why the foils can work.

But this is not the design space where most existing cruising yachts sit; you may have noticed, however, it is quite a good description of a modern high performance cruising catamaran, which is where we are starting to see foils being fitted e.g. the Gunboat designs.

We are likely to see a foiling production monohull cruiser within the next three years, note the Baltic 142 Canova with DSS fitted. After that, there is the strong possibility that foils will trickle further down the design chain, as fashion mimics the fast boats.

Then the marketing and sales team get on the bandwagon and away you go: foils everywhere!

After a while, the cruising community will realise this trickle-down effect has been pushed a bit too far and we will only see foils on the lighter cruising yachts.

What about other, more practical obstacles? How can you bring a foil boat alongside a harbour wall? What about the intrusion into the cabin space? Plus the extra complexity placed upon a cruising crew of moving them in and out or up and down? What about apparent fragility in an oceanic seaway?

All these factors are challenging, but the ingenuity of yacht designers and the resourcefulness of engineers will doubtless overcome them to a greater or lesser extent.≈