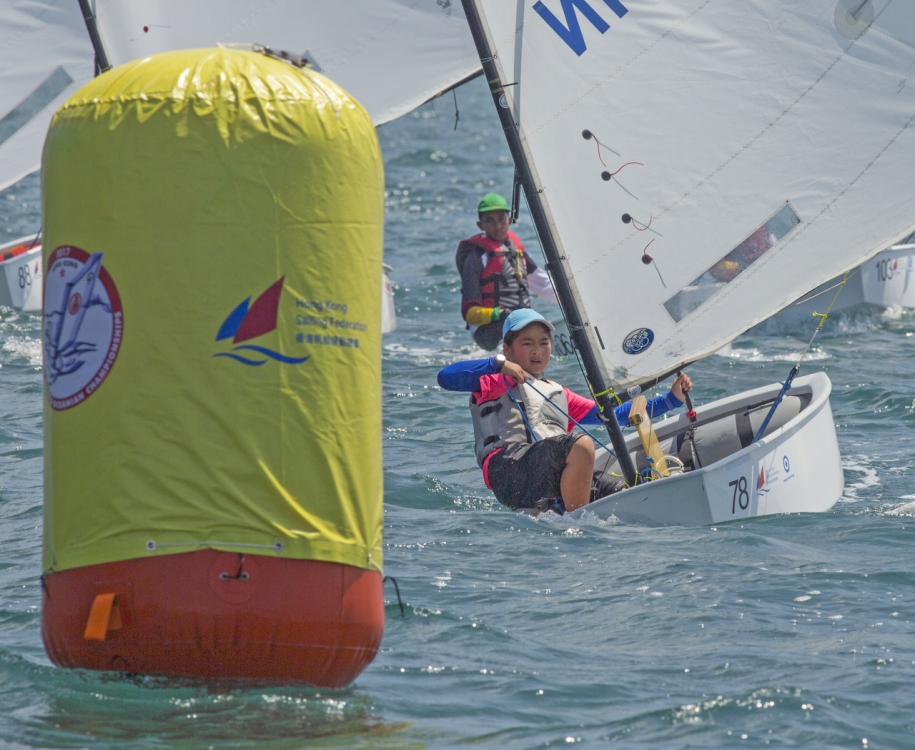 Day 2 of the Optimist Asian & Oceanian Championships saw blue skies and a better than forecasted easterly breeze of 6 to 12kts on the race track positioned off Stanley Bay in Hong Kong.

The Yellow fleet was the first fleet of the day to get into sequence for Race 4 of the qualifiers, with a general recall being issued and the black flag being hoisted. Once racing eventually got away, five competitors from Chinese Taipei, Korea, New Zealand and Singapore were given BFDs.  SGP 199 Muhammad Daniel Kei Bin Muhammad Yazid who was third overall after the first day of racing, led the fleet up to the first mark.  He was chased by 18th overall, TUR 1907 Sabri Kerem Erkmen and compatriot SGP 114 Radiance Koh for much of the leg but was caught up as they approached the mark by IND 1156 Neelanand Ramakrishnan. TUR 1907 and SGP 199 continued to extend their lead on the run to the third mark followed by SGP 119 and SGP 4573. At one point TUR 1907 tacked in front of SGP 119 to hold him off.  Shortly afterwards, SGP 119 tacked to the right but again TUR 1907 covered. In the end it was TUR 1907 who maintained his lead and took the finish ahead of SGP 119 and SGP 4573.

There was only one UFD issued during the start of Race 4 for the blue fleet to USA 21021. At mark one the tide and weakening breeze resulted in the fleet tightening up, but then 6kts came in and the fleet started to move again. USA 21325 Cort Snyder took an early lead ahead of USA 18402 Kaitlyn Hamilton and IND 1305 Harshita Tomar.  As he neared the first mark however, Snyder fell back in the fleet and it was THA 244 Panwa Boonnak rounding first followed by THA 168 Jedtavee Yongyuennarn and SGP 118 Faith Hailey Toh who maintained their lead until the end of the race. Panwa Boonnak was now first overall after four races.

After both fleets completed their race, race management wasted no time in sending them off on Race 5. For race 5 the breeze shifted right as predicted and the Yellow fleet set off in around 9kts of breeze after two general recalls and two BFDs. As the fleet made their way up to the first mark it was JPN 3149 Kenichiro Kuroda followed by THA 7247 Paravee Dangpratum.  JPN 3149 maintained his lead as he rounded the mark followed closely behind by SSP 4573 Samuel Hung and CHN 21 in a tightly knit pack. At the rounding however it was CHN 21 Xiaoneng Chen who pipped the boats from Singapore and Japan.  Hong Kong's Duncan Gregor HKG 205 made his way up on the last leg.  In the end first, second and third went to CHN 21, SGP 4573 and HKG 205.

After the day’s trend of general recalls the Blue fleet got away cleanly for Race 5. NZL 4528 Sean Sun, USA 21325 Cort Snyder and USA 20956 Colman Schofield led the fleet up to the first mark but HKG 277 Douglas Leung moved up and edged into the top three as they rounded.  For most of the beat and run USA 21325 kept his lead ahead of the Hong Kong and New Zealand boats. However, half way down the beat to the finish, USA 20956 edged out NZL 4528 for the third position and HKG 227 moved into first.  HKG 227 continued his lead until the finish with THA 168 Jedtavee Yongyuennarn in second and USA 20956 third.

The tide turned for Race 6 resulting in a general recall being called for both the Yellow and Blue fleets with the black flag being raised and 13 BFDs being issued.

The Yellow fleet started first and half way up the beat to the first mark rounding it was TUR 1907 Sabri Kerem Erkmen, THA 94 Intira Panpiboon5, SGP 4573 Samuel Hung, CHN 1 Mouyue Xie and TUR 151 Demir Dirik jostling for the top positions.  IND 1156 who had led the fleet at the start was back in front and rounded mark two in first place followed by SGP 116 and CHN 21.  The lead boats stayed close to each other but in the approach to the gate IND 1156 relinquished his lead to SGP 116, SGP 119 and CHN 21.  At the gate the boats split until they converged again halfway along the beat to the finish line TUR 1907 in the lead with SGP 116 and CHN 21 close behind. As leaders crossed the finish line SGP 116 was in first position followed by SGP 119 and TUR 151.

At the end of six races over two days, TUR 151 Demir Dirik is first overall (moving up from 6th place after day 1).  Thailand’s Panwa Boonnak THA 244 is second (up from 4th) and THA 168 Jedtavee Yongyuennard is third (up from 8th).

Race officer Charlie Manzoni commented on the days racing “We started off with some pretty shifty conditions this morning.  We had a variation in the wind of about 40 or 50 degrees which made the course setting tricky but we persevered and all came good in the end. We have had a fairly consistent breeze of 10kts throughout the day, which gently moved to the right. The racing has been very tactical because of the tide, which has been a constant factor for the sailors.  It was a great day in beautiful conditions.”

A stronger forecast is predicted for tomorrow promising exciting conditions for the team racing, racing will be held in Repulse Bay allowing for excellent spectator opportunities.