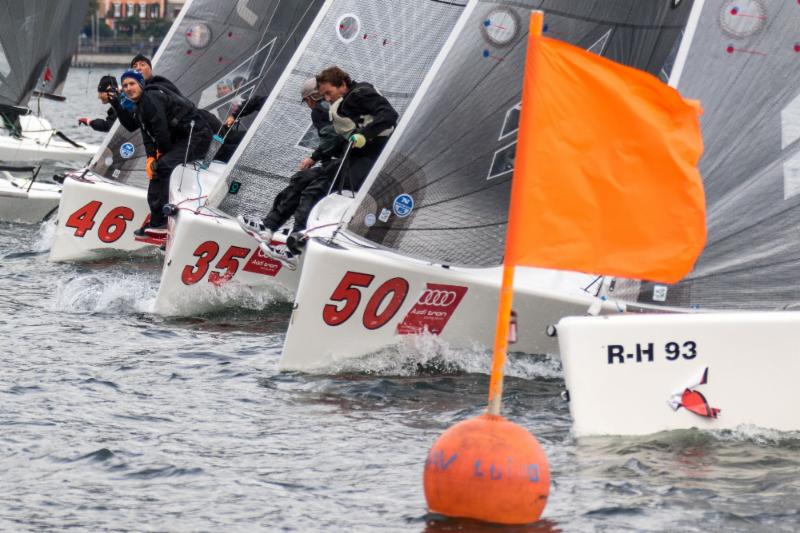 The adversity of the weather did not prevent the holding of the first races valid for the Coppa Lino Favini, final round of the Audi tron Sailing Series and the Melges 24 European Sailing Series. The balance for the end of the first day was two valid results, thanks to the experience of the PRO Fabio Barrasso, who spent a lot of time to set up the race course despite of the wind shifts.

Among 25 teams from nine nations the first leadership is in the hands of Blu Moon SUI825 (Favini-Sommariva, 1-1), as usual skippered by Flavio Favini, deus ex machina of the event dedicated to the memory of his father. A great comeback for Franco Rossini's Melges 24, far from racing since last year, when it won the Melges 24 World Championship in Geelong and the Europeans on Lake Balaton.
With two bullets Blu Moon anticipates the vice world champions of Altea ITA735 (Racchelli-Bonini, 2-2), who were awarded as the Italian Champions last month in Trapani, and the leader of the Audi tron Sailing Series Audi tron ITA840 (Simoneschi-Benussi, 6-3), that shares the third place of the provisional standings with Gian Luca Perego's Maidollis ITA822 (Fracassoli-Benches, 5-4). An excellent day also for Michael Schineis and his crew on Pure AUT716 (Schineis-Cassinari, 5-4) coordinated by the calls of North Sails Italy CEO Daniele Cassinari.
Among the Corinthian the actions are leaded by the Dutch of Gelikt NED789 (8-11), owned by Carlo Vroon now attested with his crew on ninth place of the general classification.
With regard to the Melges 24 European Sailing Series, Miles Quinton's Gill Race Team GBR694 helmed by Geoff Carveth (18-21), which controls the overall standings, did not start well here in Luino, but has a fairly comfortable margin on the most immediate pursuers; same situation experienced by the leaders of the non-professional Pro-Am group, Oleg Dyvinets' Marusia UKR819 (12-20), who arrived in Luino with an advantage almost impossible to fill.
Organized by Associazione Velica Alto Verbano in collaboration with B.Plan Sport&Events, Melges Europe and the International Melges 24 Class, the Coppa Lino Favini will resume on Saturday with the three more races. The first warning signal has set for the midday.
For current rankings and further information about the Melges 24 European Sailing Series please visit  www.melges24.com/europeansailingseries
– Melges 24 Media