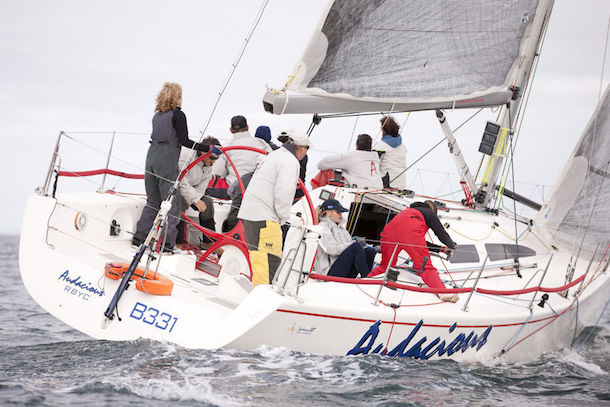 Tracey Baldwin and the Melbourne crew of Audacious pulled off a crafty clean sweep at the Brighton Ladies Skippers Series on Port Phillip on the weekend, May 23-24, 2015. For the fourth consecutive year Baldwin skippered Greg Clinnick’s Sydney 38 to victory in all three keelboat handicap divisions, IRC, AMS and PHS, plus this year took out the Associates Cup.

The light airs reduced the series to three races and at times pushed crews to their limit. Baldwin, Audacious’ regular for’ard hand and the chair of the BLiSS organising committee, says she came close to a meltdown on occasion then suddenly their fortunes would change and they’d be on the right side of a handy wind shift.

She puts the boat’s repeated success at the series for women skippers mainly on the shoulders of tactician Ken Christiansen, a key part of the Audacious program for seven years. “We try to take a few novice women out for the BLiSS and Ken does a brilliant job of tutoring and mentoring the group, talking us through every maneuver. We managed to take the clean sweep again on the weekend. In the first race we went one way and the fleet went the other and we happened to be on the better side of a huge shift and finished first by 13 minutes. There was a lot of luck involved too!”

The committee chair says organisers from the host Royal Brighton Yacht Club deliberately opted for a more informal off-water program for the eighth edition, to make sure the racing was the primary focus. “We got the feeling people liked the more casual event. We went from three course sit down meals to comfort food, and made it all about the racing. Having the owners and mentors there to guide the new skippers was another principal focus, and that went over exceedingly well.”

Adding an Off the Beach division was well received and supported and the committee hopes those who enjoyed the weekend format will spread the word to other small boat sailors around the bay.

Cecile van der Burgh from Port Melbourne Yacht Club skippered a 505 called Dance Don’t Walk into first place in the inaugural OTB monohull division. She says the new category is a great addition and she and other PMYC members definitely want to support the concept in the future. “It's fantastic to have a high profile women's sailing regatta like this on Port Phillip with both keel boats and off the beach classes together.

“It was a beautiful weekend with lovely people and there were lots of exchanges between women sailors in all classes as we’d had two half day training sessions at RBYC leading up to the BLiSS,” van der Burgh said. “On the water there’s not much interaction between the different fleets so the training days were a nice way to get to know everybody. Our club entered six OTBs in the regatta; hopefully we’ll get more sailors from our club plus others next year.”

Van der Burgh usually races a Laser, a single-handed class, and at the BLiSS was able to appreciate the company of sailing two-up with crewman Steve Howden, who invited her to skipper his 505 for the series. “The weekend was our first time sailing together, it was a valuable opportunity to figure out a new boat and I learnt a lot!!” she added.

In summary Principal Race Officer Paul Pascoe said he was impressed with the skill level and “no holds barred” attitude at the starts. “We almost ended up with a Beneteau and a Bavaria in the start boat on one occasion! For the first time BLiSS skippers, the outing was pretty gentle and overall there was a really good feeling among the competitors.”

Pascoe’s team managed to complete two races in Saturday’s light and funky southerly. Given the forecast for more of the same on Sunday they replaced the passage race with a full lap windward/leeward race. It was a good decision, illustrated by the fleet closing out what was meant to be the final weather leg with spinnakers flying.

Dates for BLiSS 2016 have been set down for Saturday April 31 and Sunday May 1 and due to this year’s success the committee intend to again run professional pre-regatta training and mentoring.

With the Port Phillip Women’s Championship Series also wrapping up on Sunday, the next women’s event on the bay is the Australian Women’s Keelboat Regatta over the June long weekend, 6-8. Entries for the keelboat and sports boat divisions are still being accepted here, with a late fee.