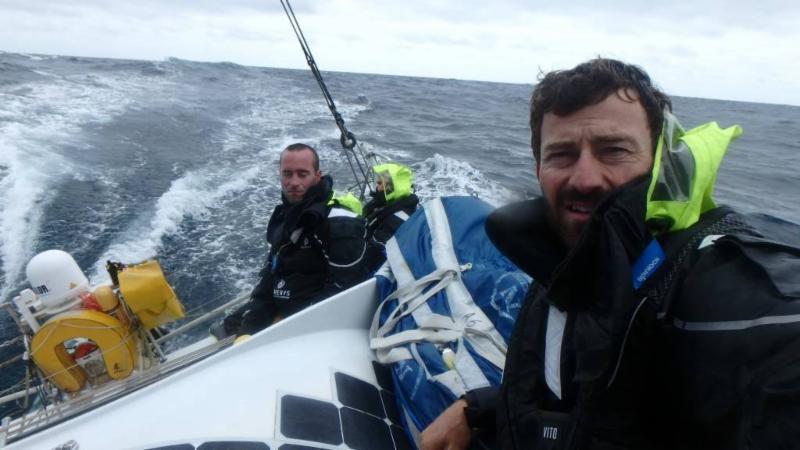 Big breeze has returned to the Sevenstar Round Britain and Ireland Race; the leading teams are blasting downwind along the wild west coast of Ireland as the chasing pack round the famous Fastnet Lighthouse, cracking sheets for Mizen Head. Phil Sharp's Class40 Imerys Clean Energy leads the fleet but still has over 1,200 miles to go to take the prize. Racing under IRC for the overall race win, Giles Redpath's Lombard 46 Pata Negra is the provisional leader. Ben Schwartz and Chen Jin Hao's Figaro 2 El Velosolex Sl Energies Group leads the IRC Two-Handed fleet.

“Things are pretty good on board now, we have been bounding around the Celtic Sea in a rather nasty chop and we have now cracked sheets at long last. It is so nice! Boat speed is up but we just found the chain locker and bow full of water, so there has been a big pumping job going on. Hopefully now the bow is on the rise.”

Having rounded the Fastnet Lighthouse, Mark Emerson's A13 Phosphorus II stopped to drop a crew member ashore (minor knee injury). This was successfully done via the help of Castletownbere lifeboat crew, but the team has now officially retired from the race. Marc Dubos' Class40 Esprit Scout has put into Cork Harbour to make repairs. Marc and Jean-Luc Schoch are both well.

In the Class40 fleet, quick's the word, Sharp's the action. Phil Sharp's Imerys Clean Energy scorched along the West Coast of Ireland covering approximately 140 nautical miles in just nine hours. Nicolas Troussel's Corum is in second place but is now over 20 miles behind Imerys. Phor-ty skippered by Sam Goodchild was leading the fleet yesterday but has turned into Galway Bay to fix a small rudder issue. Concise 8 skippered by Jack Trigger is now in third place in the Class40 fleet.

“Rocket speeds riding the depression north – now we're going fast. It's such a relief after the relentless upwind slamming. It has been a fast, downwind ride since last night and the winds are building all the way up to the Outer Hebrides.” Phil Sharp.

Pip Hare racing on Class40 Aparito described the conditions last night. “It's been quite a night, fairly wet, up to 30 knots of wind and very lumpy.” Pip sent this picture from Great Foze Rock about 3 miles SSW of Tearaght Island.

The Army Sailing Association's X-41 British Soldier and Ben Schwartz and Chen Jin's El Velosolex are enjoying a close battle on the water. British Soldier is less than a mile ahead of the French/Chinese duo. El Velosolex Sl Energies Group is leading both IRC Two-Handed and IRC 2. Ross Applebey's Oyster 48 Scarlet Oyster is going well and is provisionally second in IRC 2. Performance Yacht Racing's First 47.7 EH01, skippered by Gareth Glover is third.