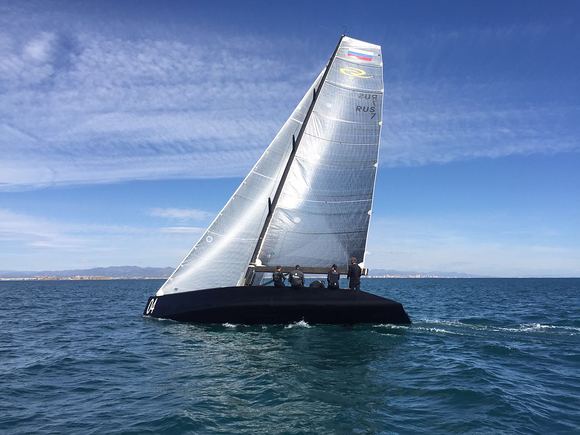 BlackWater Team, lead by owners Alexander Zaytsev, Andreas Savvidis and Maxim Merzlikin with tactician Konstantin Besputin, will join the line-up for the 2016 RC44 World Championship in Sotogrande next month.

The team's first taste of RC44 racing came in 2015 at the RC44 Valletta Cup when Russian Olympic sailor Ekaterina Skudina introduced Alexander Zaytsev and Andreas Savvidi to the Class. Zaytsev explained: “It was love at first sight for us after racing onboard as a guest sailor – we started dreaming of an RC44 campaign from there.”

With a slightly different set-up to most of the other crews, BlackWater Team will share the fleet racing helm duties between Zaytsev and friends from Skolkovo Sailing Club Andreas Savvidis and Maxim Merzlikin.

“We are a team of young enthusiasts from Moscow and although it may seem like a bold move to jump from a Beneteau Platu 25 into an RC44, we have some experienced mentors helping us put together the racing team,” added Zaytsev.

BlackWater Team will also be drawing on the advice of previous RUS 7 Anyway Anyday owner, Krill Podolski, whose generous offer of the boat and support of Maxim Merzlikin was the spark that started the team on their dream path to RC44 racing.

Lining up on the starting grid for the 2016 World Championship, from the 11th – 15th May, alongside some of the most experienced teams in the fleet. BlackWater Team will have their work cut out if they are going to take on the likes of home team Peninsula Petroleum, defending World Champion Team Nika and the benchmark crew, Team Aqua, who have the iconic RC44 golden wheels back onboard after winning the opening event of the season in Bermuda in March. But with the BlackWater Team mantra “the impossible is possible” they are starting with a good attitude.

“This is our first time against this extraordinary competition. It would be fantastic to start showing good results in some races, but the priority will be to slowly gain all the experience we can throughout the year,” said team manager and grinder onboard Viktor Filippov.