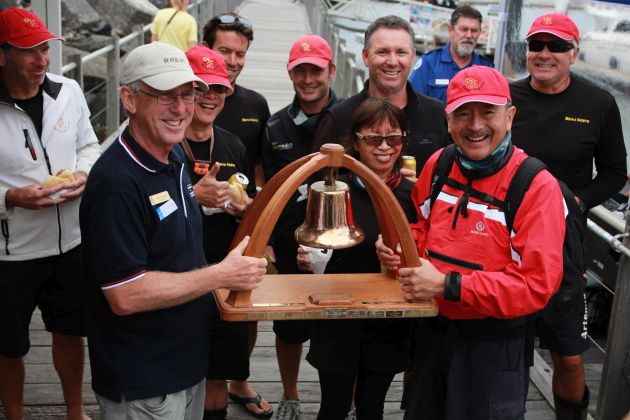 Now the nervous wait begins for the Hong Kong and New Zealand crew of the Botin 80 Beau Geste to see if the gap back to the threatening 40 and 50 footers is wide enough for them to maintain their IRC overall handicap lead. The outcome is one they have no control over as it depends how quickly the others in with a chance take to complete the 226 nautical mile ocean passage that began yesterday at 1pm from Broken Bay.

Both TP52s, Peter Hickson’s M3 with Brenton Carnell skippering, and Mick Martin’s Frantic, are in the hunt for the major silverware. The pair is staging a match race within an ocean race, now off Nambucca Heads.

Adrian Van Bellen’s J/122 Jackpot and the Kernan 44 Swish, with a crack young crew bringing the boat north for owner Stephen Proud who disappointingly wasn’t able to join them, also feature high up in the current standings http://www.pittwatertocoffs.com.au/live/current-standings

There was very little rest for the hard-working crew of Morticia, Carroll said. “The boys will probably tell you I get the Golden Pillow (most sleep) award. It took us a few miles to get going after the start, when the breeze filled in. We always had a plan to go out to sea and it paid off.

“We spent a lot of time doing prep work for this race; we usually put 10 hours of prep in per one hour on the water, so we are confident we’ll get through OK.”

Kwok wasn’t fazed by narrowly missing the record; “I’m happy. Generally we had very steady wind and the boat never parked up. I didn’t realise we were so close to the best time….that’s the way life is.”

The maxi yacht is already on its way back to Sydney aiming to beat another cut-off, Monday’s strong wind warning, and the rest of the crew are ashore at Coffs Harbour enjoying a hot shower and a feed and welcoming the early arrivals in.

Marine Rescue in Coffs Harbour did a fantastic job of cooking and ferrying bacon and egg rolls out to Beau Geste’s delivery crew this morning, and they’ll continue to cook all day for the teams arriving tired and hungry at the marina.

Today’s Macquarie coastal waters forecast is for south-easterly winds 10-15 knots reaching up to 20 knots offshore south of Crowdy Head in the evening, exactly as the Bureau forecasted. All but a couple of yachts are due to finish this afternoon and evening and there is still only one retirement from 42 starters.