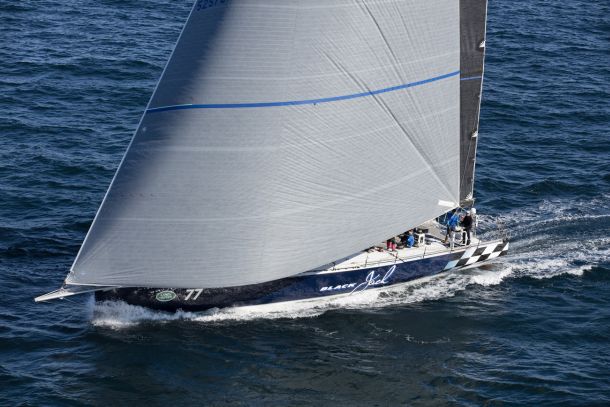 In a David and Goliath battle to the end, Shane Kearns’ Quikpoint Azzurro, the oldest and smallest yacht in the fleet, finished second overall. It was unusually sandwiched between two of the largest yachts in the fleet, the 70 foot winner and third placed Chinese Whisper, the JV62 recently purchased by Rupert Henry, having its first major race in Australian waters.

With this yacht and his former RP66 of the same name, Harburg has come so close with second and third places in this 384 nautical mile race, both for line and overall honours. This time, he warmed up his freshly modified yacht by winning the line and handicap double in the Brisbane to Gladstone Yacht Race at Easter. Next is the Brisbane Keppel race.

Black Jack, named for Harburg’s friend, the late racing legend, Jack Brabham, finished third on line last year and second overall. The previous year she was third on line and third in Division. With his previous Black Jack, Harburg placed second on line and second overall. Now he will finally have his name carved on the highly prized gold Peter Rysdyk perpetual trophy, awarded each year to the overall winner.

“I’m thrilled to win this race,” Peter Harburg said this morning. “This is a race sailed in four totally different conditions over a three to four day period. We took the attitude we needed to improve our light air performance, and while we hoped to do better against the bigger boat (Perpetual Loyal), for a 70 footer it is difficult against a 100 footer.”

Harburg continued, “What makes any boat good is a good crew, and I have that. Mark Bradford (Black Jack’s skipper), is a very good leader, and my crew of mainly Queenslanders, who have been with me for a long time are good sailors and tireless workers.”

Like the rest of the fleet, Black Jack was hampered by the ‘parking lots’ on the course and the constantly changing conditions, necessitating myriad sail changes. “I’m a passenger on ocean races and I watched the crew. They were great; they stayed on the job the entire race – and no complaints,” Harburg said.

“When the breeze lightened off in the last 50 miles, I knew we’d done the right thing with the adjustments to the boat. Nothing comes for free though, we paid for the changes (the yacht’s handicap), but it was worthwhile.

“We took over 20 miles out of Loyal’s lead; if the race had gone on a bit longer….,” he said. Unfortunately, we didn’t get to Coffs Harbour in time to make a difference against her, but in every race you need luck, and we had our share, as did everyone,” ended Harburg who won the Queensland IRC Championship with his smaller Black Jack Too in early July.

Shortly before Black Jack was declared overall winner of the Land Rover Sydney Gold Coast Yacht Race this morning, the last boat in the fleet of 62 crossed the finish line at Main Beach. Southport Yacht Club entry, Painkiller Forte, the Jeanneau 45.2 owned by Rod West, finished 07.48.37am, coming home quickly in the southerly.

There was only one headache for West. Although the southerly helped him to second overall under PHS, he is obliged to pay out drinks to the PHS winner, Les Goodridge (Wax Lyrical). Goodridge, an ex-Navy commander and West, an ex-Army colonel, waged their bet before the race start. Third overall went to the Northshore 370, Mortgage Choice Rumba, owned by Robert Carr, Kerry Burke and Stephanie Cook.

There were no retirements from this year’s race, with all yachts making it safely to Southport in good time after a slow start last Saturday.