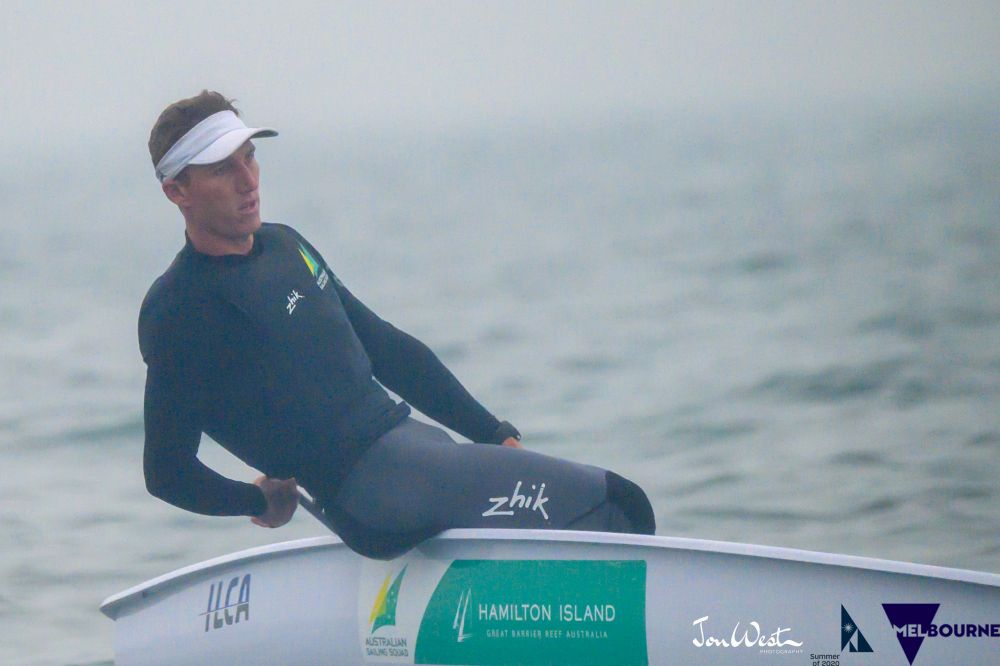 Luke Elliott (AUS) shrouded in smoke on his way to a win in Race 6 of the Australian Laser Championships. Photo Jon West Photography.

It was another frustrating day for sailors and race officials alike at the 2020 Australian Laser Championships. Sandringham Yacht Club was shrouded in smoke, with the gentle southerly breeze not strong enough to blow it away – or allow racing to commence on time.

Finally, a light westerly materialised earlier than forecast and the PRO sent all three fleets out on to the course. But the dramas were just beginning.

The Laser Radials, now split into Gold and Silver fleet, were the first to attempt a start.

With the bushfire smoke becoming thicker and the wind continuing to fluctuate in both direction and velocity, it was a real test of the sailor’s instincts and nerve.

There were a number of general recalls as the wind swung by as much as 30 degrees during the pre-start, causing the race committee to eventually start the Gold fleet under Black Flag.

A large group at the pin end were caught out and 21 sailors were disqualified, including the two leading Australians, Mara Stransky and Zoe Thomson.

Stransky was philosophical about the result, saying, “I was over (the line), I’ll take the penalty.”

But she did comment that the conditions were very difficult, with the pin being shifted several times as the wind fluctuated, and with visibility so low in the smoke haze.

“The wind was so light you could barely lay on starboard and you couldn’t get a transit because you couldn’t see the other end of the line,” she said, reiterating that she wasn’t making excuses.

Rio Olympic Champion Marit Bouwmeester (NED) holds on to her overall lead by a single point over Karachaliou and her Dutch team mate Jonker.

The men sailing the Standard rig were not exempt from the problems besetting the Radials and there were six black flags in that fleet also.

Matt Wearn consolidated his position at the head of the competition with a solid third place.

“It was a pretty average race,” he said. “I’m happy to take that one away though. I’ll take ‘a keeper’ in conditions like that.”

Double world champion, Nick Thompson, who finished 10th was also philosophical about the day. “The wind was fluctuating from 3 to 10 knots and shifting about 40 degrees. The worst thing was you couldn’t see the shifts (because of the smoke),” he said.

The race was won by Luke Elliott of Australia, with Karl-Martin Rammo of Estonia second.

The result moved Elliott into the top 10, but there was little change at the top. Wearn increased his overall lead to nine points over New Zealander Sam Meech, giving him a healthy buffer with only two days left to sail. Another Aussie, Mitch Kennedy, holds third place, six points behind Meech.

The young sailors in the 4.7 fleet showed their older counterparts how it should be done, with just two competitors black flagged.

Singaporean sailors took five of the top six places. Victorian Hamish Cowell was in second place, splitting winner Joelle Lio, a female in the Under 18 category, and third-placed Russell Yom.

Yom now leads the overall standings by a single point from compatriot Jonathan Lio, while Australian Toby Coote is in third.

Race officials will try to get three races sailed tomorrow, when conditions are forecast to be better, with slightly stronger winds and better visibility.

Full results are available at http://sailingresults.net/?ID=80313