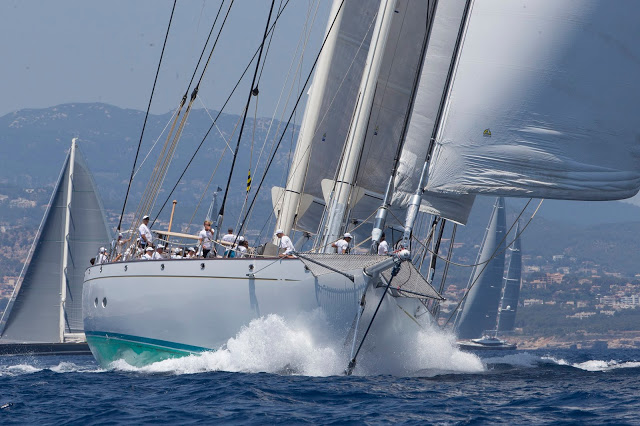 The Superyacht Cup Palma fleet returned to action today with an added ingredient – a shot of extra breeze which set Palma Bay alive.

Any early concerns over the wind evaporated as Palma’s ever reliable sea breeze kicked in to send the 16-strong fleet off to a flying start in a steady 10 to 15 knots.

The extra five knots of wind around the course added spice to an already indulgent feast of sailing, with the battle lines now firmly established on the route to deciding the contenders for winner of Europe’s largest and longest-running superyacht regatta.

That said, the close contest in Class A ended with all three hard-charging boats in lockstep around the course. With the final results the exact opposite of yesterday – Win Win first today ahead of Saudade and Highland Fling – each yacht sits on four points with all to play for in tomorrow’s decider.

“The fact we are all tied on points shows that it is pretty close racing,” said Win Win’s skipper Ryan Taylor. “We were expecting it though; it is always tight racing with these guys, always a challenge.”

In the diverse and competitive Class B, the largest class at the regatta, Mari-Cha III emerged the winner ahead of Sojana with Ganesha in third place.

After a second place yesterday the 45m super-ketch is poised ahead of the final day said race skipper Mike Sanderson, still buzzing after an exhilarating day on the water.

“It was amazing and Palma Bay turned it on once again – it is a very special place to sail,” he said.

“We had a reaching superyacht course and beautiful conditions. It was one of those days that was spectacular to watch as well, even from where we were sitting. If we have a good day tomorrow we are well placed – so fingers crossed.”

Between the J Class rivals in Class B, the day went again to Velsheda, who finished fourth in the class, with Svea fifth just 14 seconds in arrears on corrected time.

Overall, Mari-Cha III leads Class B on three points, Velsheda is second with five, and Sojana third with seven.

In Class C, the majestic 56m Athos made the most of the bigger breeze to win the day. However, Silencio added a second place to her first day victory to lead overall from Athos and Bolero.

And it was a case of trading places in the two-boat Corinthian Class D, Q taking the win today ahead yesterday’s winner Scorpione of London – as in Class A the two are dead level on points and anticipating tomorrow’s winner-takes-all finale.

Once ashore owners, skippers and crews enjoyed the Southern Spars Happy Hour and expended any remaining competitive energy in the Pendennis Paddle Board Challenge, which was followed by the invitation-only Owners’ Mid-Summer Barbeque at The St. Regis Mardavall, one of The Superyacht Cup Palma’s main partners.

Racing at The Superyacht Cup Palma continues tomorrow with the final day of racing.

The Superyacht Cup Palma got into full flow today as the Pantaenius Race heralded the start of fleet racing with a course around a sun-soaked Palma Bay.

Following a spectacular curtain raiser to Europe’s largest and longest-running superyacht regatta with the J Class yachts Svea and Velsheda in what amounted to match racing action yesterday, the entire 16-strong Superyacht Cup fleet took to the water.

Class winners last year and Superyacht Cup victors in 2016, Win Win got the party started, crossing the line bang on her allocated 1300 timeslot as part of a staggered starting sequence, heading out to the left-hand side of the course. The rest of the superyacht fraternity followed suit, starting at two-minute intervals in a light but steady breeze.

Saudade was next up, opting for the right side to the first windward mark, with Highland Fling following in Win Win’s wake to complete the Class A contingent.

Bliss was the first of the seven-strong Class B – the largest at the regatta – to start racing, swiftly followed by the J Class twosome, uniquely starting together to maintain their race-within-a-race wrangle.

Class C and then the Corinthian Class D duo of Q and Scorpione of London joined the action, all heading for the first mark of the course, Silver Fern, so named in recognition of 100% New Zealand’s support for the Superyacht Cup.

While the staggered starts might eliminate the drama of a crowded start line, it does nothing to detract from the intensity and focus of the racing, with all the crews aiming to wring every ounce of performance from their yachts.

The ORCsy handicapping system aims to smooth out differences in size and design. So it proved in Class A with Highland Fling demonstrating her racing pedigree to win by almost a minute and a half on corrected time ahead of Saudade after two and a half hours of racing, with Win Win only 23 seconds further back.

“It was fantastic out there today, great conditions here in Palma with a nice nine to 12 knots sea breeze, and quite challenging at times,” said Cameron Appleton, Highland Fling’s tactician. “I like this place it’s really special, the unique geography puts a bend in the wind you have to get right every time. We were fortunate to get past the right boat at the right time and pull away on the last leg to take first in our class. Timing was everything.

“The first race is always pretty key. We expect conditions to be similar tomorrow so we know what we have to do. Anything is possible.”

Closest contest though came in Class C, with Silencio getting the better of Bolero by just 12 seconds with Aquarius third.

“We actually thought we had lost it by 15 seconds, which was our guess,” said a delighted Ed Danby, helm on Silencio.

“We had a cracking last run coming in and got two really favourable shifts which helped a lot. We have got a great bunch of guys on the boat, and the owner’s wife and his children helping pull the spinnakers down, and that’s what it is all about.”

Scorpione of London took Corinthian Class D honours ahead of Q, while Velsheda not only got the better of Svea but also took the win in Class B ahead of Mari-Cha III in second, pipping Svea by just 28 seconds on corrected time.

“We got our start right, taking the right-hand side of the first beat,” said Velsheda tactician Tom Dodson.

“We weren’t a 100 per cent sure about it but we were pretty sure that side would work out, and then we saw a couple of the locals going that way, so we felt pretty good about that.

“I don’t expect any more races like that to be honest; our performances with Svea are pretty much identical. We are now racing the general fleet and not just Svea – we quite like the ORCsy format and the boats we are racing are all well sailed, and Svea is certainly one of those.”

After racing competitors celebrated a great day on the water and enjoyed the North Sails Happy Hour followed by the Paella Dock Party at Jack’s Club by St Regis.

Racing at The Superyacht Cup Palma continues tomorrow and Saturday.