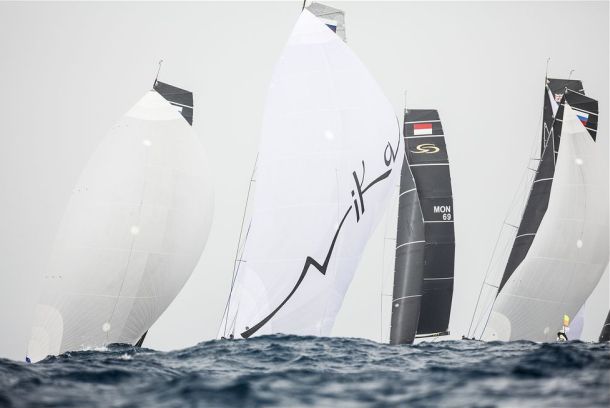 Fleet racing at the RC44 Valletta Cup got off to a challenging start on Malta's north coast, the 11 crews taking on some of the biggest waves and most confused seas they have ever encountered in their slender one designs.

With the start area for the windward-leeward courses set up off St Julian's, northwest of the Maltese capital, the first race was made no easier as the wind dropped off to 6 knots, leaving the boats at the mercy of the big waves on the downwind legs. There was then a wait for the breeze to settle before it re-established itself in the northeast, building to 18-20 knots for race two and dropping again for today's third and final bout. 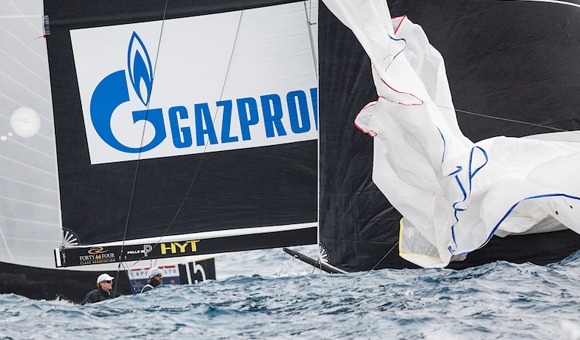 Despite his absence from the circuit, it was Slovenian skipper Igor Lah and Team CEEREF that claimed the first two races. Assisted by Adrian Stead calling tactics and Tim Powell on mainsheet, Lah said: “I was placed extremely well on the start line and from that point it was pretty easy. When you are in front and there are no collisions – you just sail your own way.” Of his two wins Lah added: “I was sure that we could do it. I am also sure that it will not always be like this!”

Of significance, particularly in the second race, was the choice of headsail: Team CEEREF flew a genoa enabling her to pop out in front as the boats around her had up smaller jibs.

“One of our goals has been to sail the boat as close to 100% all the way around the track – I'm pleased with how we did that today,” commented Adrian Stead. “The breeze was shifting around enough that if you got it right it did make it look very easy.”

The only blemish on an otherwise perfect day for Lah's team was a disappointing ninth place finish in the third race. Stead admitted that he had misjudged the start. Team CEEREF ended up ducking the entire fleet on port tack and they also made some wrong called at the top of the second beat. The Slovenia crew ended day one leading, but tied on points with Katusha, which scored a seventh in race one, but then two seconds.

“We kept getting better and better,” said Katusha's American tactician Andy Horton. “Today it was tough. In the first two races the wind was shifting 100ͦ back and forth – so hardly straightforward!” However the left, offshore side of the course paid all day with better pressure. 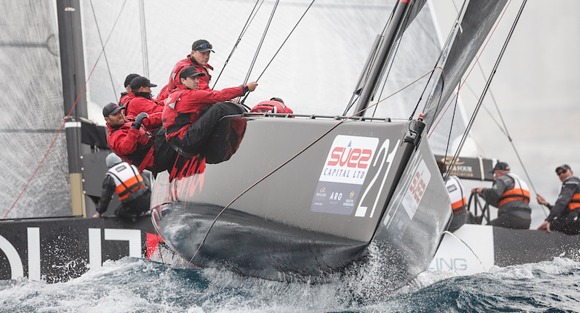 Bronenosec Sailing Team had the most consistent day finishing third overall, but just one point off the lead. “We made a few mistakes, but it is not bad to be third at the end of the first day,” said skipper Vladimir Liubomirov. “The weather was not so easy, but we saved our boat. I am happy and we know how we can improve, which is important.”

The final race was won in emphatic style by Vladimir Prosikhin's Team Nika. On board as tactician, following his recent departure from Emirates Team New Zealand, is Dean Barker, sailing his first regatta with the Russian team. “The first one we were all out of sorts, we did a late jib change,” described the America's Cup legend. “In the second we were battling a bit for pace, but we managed to chip away a little bit and in the last race we got a good start. We had a great first run and the rest of the race was very enjoyable.”

But the overwhelming memory of today was surfing down the big waves in race two, fun but making boat handling through the gybes a significant test for the crews. “When it's only 10-12 knots it is not much fun,” said Barker. “But in 18-20 knots, the boats really come alive.”

Or as Igor Lah summed up: “When you caught a nice wave – it was brilliant. That is why we go sailing.”

With a full gale forecast tomorrow afternoon, the race committee is intending to start early with the first start scheduled for 09:30.