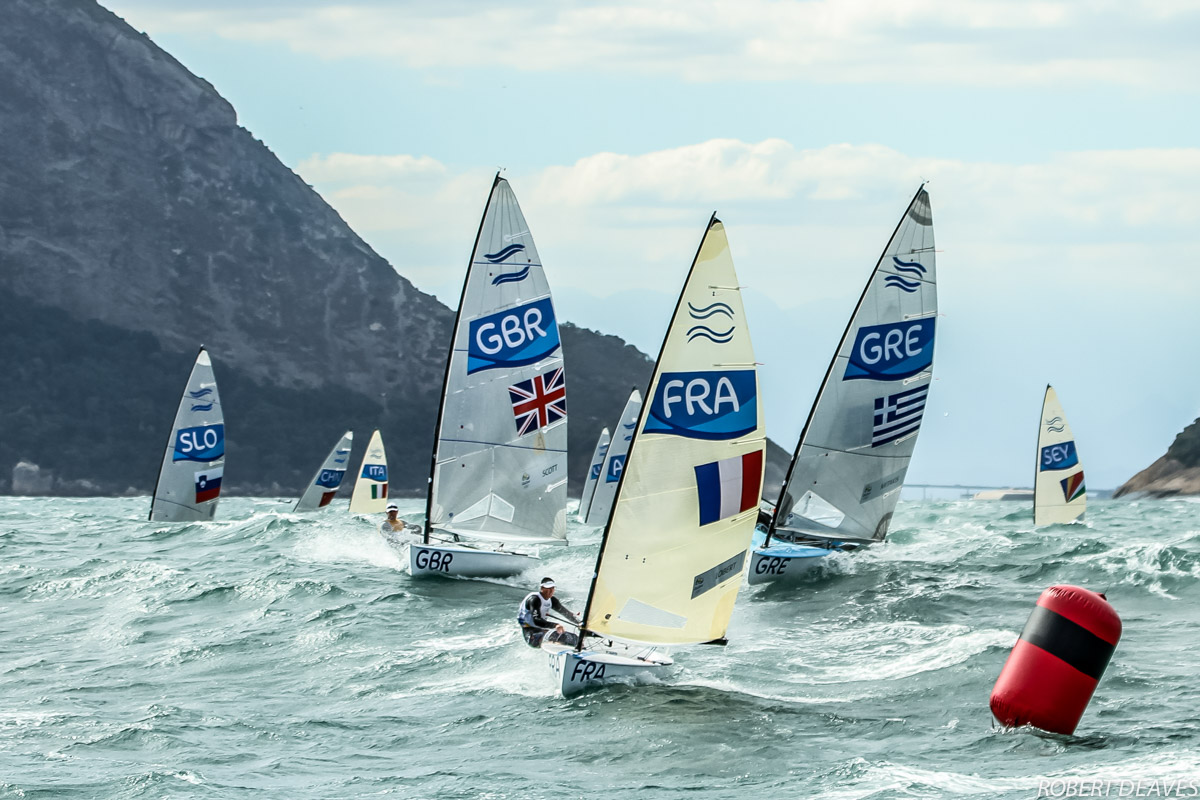 ‘Classic’ – Definition: judged over a period of time to be of the highest quality and outstanding of its kind.

‘Power’ – Definition: the ability to exert a maximal force. While strength is the maximal force you can apply against a load, power is proportional to the speed at which this maximal force is applied.

The Finn – THE classic power dinghy – was designed to test the best individual sailor at the Olympic Games. This thoroughly modern, but endearingly classic dinghy has been successfully doing that through 17 Olympics and is heading towards its 18th in Tokyo 2020. With just under 900 days to go, the 2018 season is inexorably heading towards the first 2020 Olympic qualification event, at the world championship in Aarhus in August. This is the main objective for most sailors this year on the increasingly narrow and tortuous trail to Tokyo.

The European season begins next week with around 50 Finns taking part in the Semaine Internationale De Cannes, the traditional icebreaker for the season. However, many top sailors are already in Cádiz training for the European Championship, which has attracted nearly 100 entries so far – a level that has become the norm in recent years. It begins on March 9, and is preceded by the Andalusian Olympic Week.

By the conclusion of the Europeans we should have an indication of who has done their winter homework and whether any of the new young protagonists have made the leap to rock star status. Various training groups have been active in many parts throughout the winter, in Auckland, Athens, Cádiz, and of course Valencia. The steaks are bigger, and higher, than usual this year as the sailors beef up for the tough season ahead.

The other high points of the season will be the amazingly successful Finn World Masters, which this year heads back to Spain, at El Bális, near Barcelona, and the U23 World Championship, in Koper, Slovenia, the country’s first ever major Finn Championship. This wide spectrum of youth and experience is a perfect illustration of the remarkable spread and diversity of the class. Finn sailing really is a sport for life.

With only 19 spots available in Tokyo, competition will be intense. Fifteen of the 23 sailors who took part in Rio are now on the campaign trail and have their sights set on the land of the rising sun in two years time. Of one thing we can be sure, it is going to be a gruesome battle to determine those places, and Finn sailors are not pretty when their backs are against the wall. Classic Finn competition.

Today’s Finn sailors are becoming more powerful, more adaptable and more astute than ever before. They need to be, because the level is rising all the time. The return of the 2016 Olympic Champion, Giles Scott, in Miami a few weeks ago, and his inevitable win, has thrown down the gauntlet to the fleet to step up to the mark and challenge him for class supremacy.

Even in the 18 months since Rio, technique has moved on and sailors are trying out new ideas. The advent of free pumping was a eureka moment for the class. Suddenly the sailors could use their immense power and strength to enjoy the Finn to the full, for sailing the boat downwind in a breeze is a powerful experience. With the class now experimenting with dropping the wind limit for free pumping from 10 to 8 knots, as it was dropped from 12 to 10 knots in 2010, it is evidence enough of the vastly increased fitness and athletic ability of the top of the fleet. It is pushing the sailors to the extreme of what the body can take, testing and challenging every minute of preparation.

In any sort of breeze, the Finn requires enormous physical capabilities and huge power and strength reserves to be able to drive the boat at maximum speed for the duration of the race. The better you get at it, the easier it becomes, but the fundamental requirement is power. Lots of it.

Of course, like the sailors, the Finn itself has also evolved. Materials have improved, fittings have improved, rigs are space age compared to the wooden masts and cotton sails first used. The boat has evolved, without losing anything of its original spirit. But, from wood to fibreglass and carbon, and from cotton to Kevlar, the sailors remain some of the best and the most powerful athletes in the sport of sailing. Classic Finn tradition.

The Finn became a classic dinghy before many of the current top sailors were sparkles in their father’s eyes, but it has kept pace with the times. It has some of the strictest equipment control rules in the sport of sailing. While these rules do not make every boat identical, they do make sure every boat is a Finn within the strict building tolerances laid down by the designer, Rickard Sarby, seven decades ago.

The famous seaworthiness of the boat allows race organisers to run races for the Finn even in extreme wind and wave conditions. A good example of that was the exceptionally tough medal race at the 2008 Olympics in Qingdao, as well as two days in Rio in 2016, when the Finn fleet was one of the few fleets allowed onto the open ocean on the big wind days. Those two days outside Guanabara Bay provided some of the most spectacular and dramatic sailing footage and images ever seen by viewers of the Olympics.

The shape used today, is, give or take the tolerances, the same shape that Sarby drew all those years ago. Over those decades, the class has embraced new technologies both for construction and materials, but also for controlling construction and materials, while maintaining the integrity of the original concept. The swing test introduced by Gilbert Lamboley in the 1970s was a revolution in keeping boats as alike as possible.

In fact the Finn rules, combined with the dedication and expertise of the Finn equipment manufacturers, has enabled the production of almost identical boats, and within any production line of Finns, the boats are more alike than perhaps any other class.

But that is only half the story; the tolerances in the boat and the adaptable rig enable a hugely diverse group of people to race on even terms. There is no need to be a certain weight or a certain height – though certainly the upper range of either would help – as the rig can be modified to suit a sailor’s style and physical traits so he can sail as fast as the guy in the next boat. That’s easy in theory, but hard in practice, and that is a large part of the challenge, and the attraction, of the Finn.

Throughout the coming year we will again be bringing you the sailor’s stories, of the successes and the defeats, and the trials and tribulations of a group of elite athletes sailing a classic power dinghy with one thing on their minds. Timeless Finn ambition.