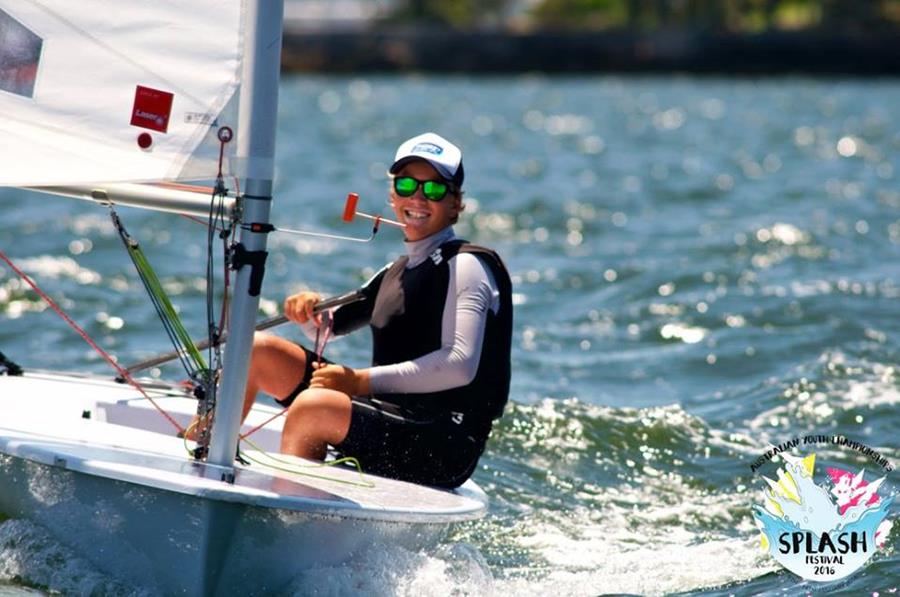 Sydney’s string of summer weather continued, allowing all classes to complete their daily racing schedule, with all but the 29er class to start two races early Thursday.

The 29er class sailed four races yesterday (Wednesday), as Thursday’s race schedule is pulled forward due to a predicted afternoon storm. The 29ers will kick off racing ahead of the weather front, which is expected to bring gusty winds and a dramatic end to the series.

Current Hobie 16 class leaders, Lachie White and Ethan White will head in to the last day of racing with an unbeatable lead, as two drops come in to play after the ninth race. The pair who represent Great Lakes Sailing Club has won all but one race this week and in their second year as a team are taking each day as it comes, “we’re stoked to be out here and gaining as much experience on the harbour as possible, we loved it for Sail Sydney,

“We’re the same age and although we have the saw last name, we aren’t related – we have done a heap of cat sailing separately and now together – it’s awesome to be able to sail here, gain racing experience – it can be really difficult out there,

“You’ve got to be on top of everything, from the ferries, coach boats and the fleet – it’s hard when there isn’t many in the fleet, you’ve got to keep an eye out!

“I hope we get to race tomorrow, we love racing against anyone and with weather like this, it would be hard to stay on shore even though the scoreboard would let us– it’s awesome!” said Lachie, who joined up with Ethan who’s brother aged out of Youth sailing, leaving him without a crewmate. The pair holds the most comfortable point advantage in any class and will enjoy a relaxing day on the harbour.

On the same course, the 420 sailors enjoyed two races in an increasing breeze, that saw Nicholas Sharman and James Grogan post their worst results of the series so far, allowing Finn Gilbert and Henry Haslett to close the gap on the leaders. Sharman and Grogan sit only three points clear of the NZ / NSW mixed crew of Gilbert and Haslett.

Just over 20 points behind are third placed Alex Brodie and Emerson Carlberg who sit on 44 points, equal with Sophie McIntosh and Emily Summerell who step clear of their all-girl division competition, following on from their success at last week’s National Championships.

The Laser Radial will be the closest battle, with Sydney’s Finn Alexander holding a one-point lead over Western Australian, Conor Nicholas. The pair sit clear of equal third placed Noah Taylor and Caelin Winchcombe, who will have their own battle for the bronze medal. However, the main stage will belong to Alexander and Nicholas, whose mutual respect is evident as they discussed their rivalry over the week.

Local sailor, Alexander, is no stranger to the course area and he hopes that will assist him tomorrow, where he plans to string together another solid day of results, “I was glad that the day went to plan – a few things have gone wrong this week but I feel like I’ve made a decent comeback after a pretty rough start,

“‘Conor and I are constantly dueling around the course – it’s been that way at every regatta this year – so tomorrow, I’m hoping to go hard and send it, I’ll be leaving everything out there.”

The 4.7 lead remains in the control of Rome Featherstone, who’s consistency has paid off, only once being outside of the top ten this week. William Sargent of Tasmania is in second place whilst Featherstone’s fellow Fremantle Sailing Club mate, Hayden Coote holds down third place.

John Cooley and Simon Hoffman return to the top of the leaderboard after posting a second and hat trick of wins during today’s four races. Struggling to find their typical dominant form earlier in the series, Cooley and Hoffman were back on song in the 15-knot east south-easterly breeze, winning each race in convincing form, by no less than a minute on each occasion.

In the 29er class the first placed girls team of Natasha Bryant and Annie Wilmot sit five points behind in second place. They managed to finally break their race win voodoo with a bullet in the opening heat of the day. Although Tom Crockett and Tom Grimes suffered a disqualification under the U-Flag rule at the start of Race Eight, they remain in third place, 17 points clear of fourth.

The Bic Techno 293 class completed two races, leaving them with two to complete their series. Alex Halank drew on second wind, as he made a late challenge against regatta leader, Angus Calvert. Halank reduced the gap to 5 points and will be hoping for two more race wins on the Rose Bay course. John Lynch maintains his position in third place, whilst Courtney Schoutrop remains first placed girl in fourth. Abbey Calvert continues to show admirable zeal as she completed both races yesterday.

The final day of racing will begin at 1000 for the 29er and Laser Radial classes, with the remaining classes all starting by 1100. It will be a battle across the classes, with the eventual winners being crowned as the Australian Youth Champions for 2016.