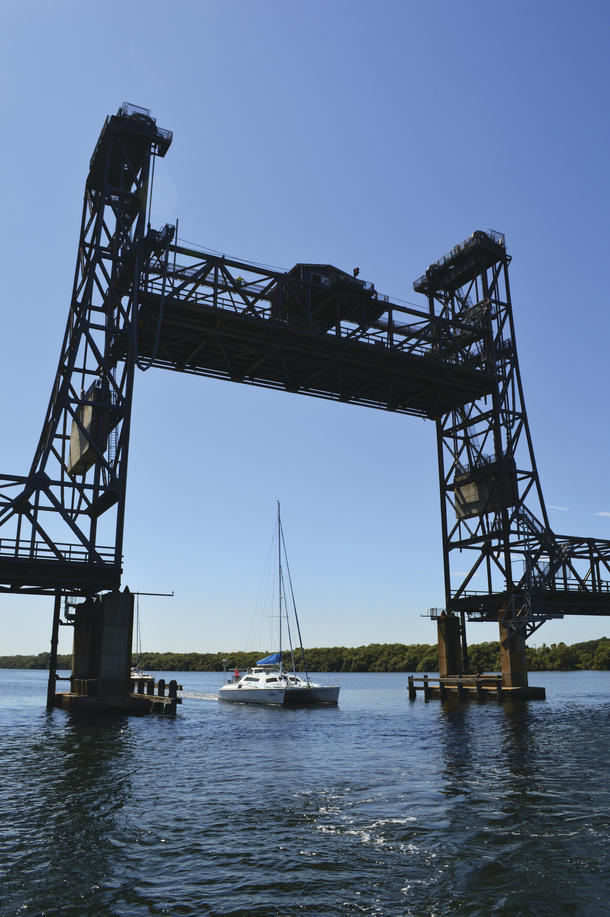 Cruising is not about whipping in under full sail, ropes straining, fuelling up and having a shandy and heading off again. There is more to it than that, if it is to be enjoyed in the genteel fashion to which we would all like to be accustomed.

We met some people recently who said “the Clarence River was not worth looking at, we went up in our dinghy and there’s nothing there”. They had opinions on pretty much every subject involving cruising, but I, sitting there in a stunned silence, thought to myself “this is all rubbish, these clowns have no idea”.

You have met the type, no doubt. They can be found in caravan parks, pubs, yacht clubs, lawyers offices and houses of parliament. The Clarence runs over 300 kilometres and feeds from the Nymboida, Mann and Cataract rivers, to name but a few. Grafton is about 38 nautical miles up, where the eight metre high railway bridge halts further progress. But, with depths of at least 3.5m all the way and generally more, it means that a prodigious great vessel can spend weeks in here. To claim you have “done it in the dinghy and saw nothing” is demonstrating some mighty flat-lander folly!

Based on their learned report that the Clarence was a barren wasteland, wife Vicki and I determined to give it a good looking at with a practised cruiser's eye.

Having completed our apprenticeship for cruising by serving seven years on Sunbird, holiday-sailing between Tasmania and Bowen. We have finally upgraded to a bigger catamaran, something a little more commodious, which we could live aboard for a number of years and truly go exploring.

We had pulled into Yamba before to hide from big southerlies, or just to refuel during those coastal passages. Matthew Flinders missed it entirely in 1799 as the entrance was a mass of mangroves.

It was named Clarence in 1839 after the Lord High Admiral in Old Blighty. Back then the entrance was a mass of shoals and the Cedar-getters had a hard time of it.

These days there are training walls and a very big bar about one mile out that pumps big-time in east sou’easterly swells. But we managed easily to duck in around the northern edge after the 100 mile overnighter from the Gold Coast, a week after the Fiji cyclone in January.

The current in, through the training walls, can run over 2kt, so if you go through right at the top of the tide or shortly after allowing for the two hour overrun, you will get a nice push in. It is a friendly, wide, spacious waterway.

The 5000 tonne Lord Howe trader ran from here and there are some large vessels at various slips upstream being worked on, maintained and still plying their trade.

Immediately on your left as you get in is a little bay off Hickey Island, which offers an easy and quick anchorage in 3m of water, although a bit swelly. Or, you can follow the leads up and around Dart Island and back to the vicinity of Yamba Marina. There you will find the usual chandlery, fuel and so on.

The alternative is, you can continue up the river about one mile and run through the break in the starboard, northern training wall that marks Iluka. There is oodles of room to anchor, a floating pontoon for access to the pub, a fish co-op and sundry other amenities.

Be careful if you are coming through the break in the early evening, the prawn and fish trawlers are heading out and, although the break is 5m deep, it is only wide enough for one-and-a-half boats; you do not want to be the half. But the view over the training wall should enable you to spot them well in advance.

The holding is excellent in three to five metres and plenty of swinging room. The passenger ferry over to Yamba leaves from here if you want to explore the south side without moving the boat.

Continuing up past Palmers island, we see the large northern channel suitable for fishing dinghies and the like, run off into the Broadwater. The main river meanders along to the south, past cane-farms and stately old houses with big fig trees, banana stands, mango trees, swings, gazebos and jetties.

We did the bulk of the river on one motor, idling along at 4kt and taking in the scenery. No jetskis, no big boat wash, no noise apart from cockatoos, cicadas and cows.

The first obstacle is the Harwood Bridge which carries the Pacific Highway trade. Completed in 1967 it replaced the three ferries which ran continuously.

If your mast is over 8.5m and if you have remembered to ring them the day before to organise an opening, no problem. Otherwise, drop the pick in three to six metres of water and take your dinghy under the bridge to the 25m floating jetty at the Harwood Hilton. Over the comforts of a cold beverage and excellent pub lunch or tea, surrounded by the cockatoo, budgerigar and cicada ambience, you can enjoy the feeling of fuzzy warmth and entitlement (if that word is allowed), which arrives with the realisation that with one phone call you can stop the entire Pacific Highway for about 20 minutes to allow your humble abode to pass safely underneath. Just so long as you do not have a mast over 35m.

Vicki and I enjoyed a country-style big chicken ‘parmy’ and butterflied garlic prawns and salad. We will be stopping there again just for that. The cold beer on a hot summers day, reminds me of my first beers on the Northern rivers in the ‘70s.

Once past the Harwood bridge, it just keeps getting better. Maclean is another three mile up the river. The Clarence Tourism Board, in partnership with Roads and Maritime, has put in a 26 metre jetty with power and water. You can stay 24 hours. The power points are standard 10 amp units with circuit breakers and the water is clean.

There is parking and rubbish bins within 20 metres of the jetty, a bottle shop across the street, a supermarket and public toilets 50 metres west. Plus no shortage of cafes’, bric-a-brac, bowling club and RSL. Owing to its high proportion of Scots that immigrated in the 1850s for cedar-getting and beef, more than 200 of the towns power poles have been painted in tartan clan colours!

The whole place is heritage listed and is as neat as a pin. We did not even see any graffiti.

The Chinese restaurant at the bowling club is amazing. A proper country hardware store and two town pubs complete the picture. The views from Maclean pinnacle, a 2km walk, give a good overview.

The town of Lawrence is another three mile up and has a fixed jetty and tavern. Away from the shoreline, there is a large population of retirees enjoying the relaxed fishing and river lifestyle.

The river shallows out a little just past Lawrence, getting down to 3.5m in places. The tides up here are two to four hours behind Yamba and only run a foot or two between high and low.

Brushgrove is another two hours slow cruising up the river. There is a 26m floating jetty with no power opposite the pub, which has its own small jetty.

We tied up after a cruising breakfast and wandered over the bridge to the Brushgrove Hotel for a wee dram. After being served, the pubbie said she could not charge us yet, the tills did not come on until 10 ‘o’ clock, so come back and pay later!

It is times like this when you realise what the country life is all about.

The backyard has swings and bikes for the kids, a big green lawn and garden and views over to your boat.

So there we sat like King and Lady Muck, enjoying the fresh chilled taste of an early morning country schooner while perving on our floating house tied up across the creek. Eggs are $4 a dozen and honey is $6 at the bar.

We witnessed some real boat-handling here: a local prawner, Tootie II, had to get under the bridge on the south arm. He was short enough but with his trawls out, too wide. So he took it through at an angle, crab-wise and did not touch anything. Look mum: no thrusters! Makes a mockery of some of the boat mangling I see on the Gold Coast.

Overnight we sometimes anchored out in the middle of the river. Depths usually gauge around 5m and far enough offshore to not be bothered by mosquitos or flies. I used our salinity (TDS) meter and got a reading of 232 at 34° Celsius at Maclean. Needless to say, we were swimming in this bathwater. Our freshwater tank reads 150, so 232 is just brackish.

Further up at Ulmarra we got readings of 128 at 30°C and right up at Grafton it was showing 80, fresher than what we had in the tanks. It is pleasantly refreshing from an engineering perspective, to run freshish water through the diesels and heat exchangers for a change.

Five miles of relaxing big river cruising after Brushgrove and just after passing another vehicle ferry, we arrive at scenic Ulmarra. Cockatoos, cicadas, crows and innumerable other bird noises surround the floating jetty which, astoundingly enough, is yet again right beside its hotel. The Commercial is heritage listed, big green shady yard on the river with breakfast lunch and dinner seven days, rooms upstairs, three different brands of Cooper’s beer on tap and a nice wine selection.

Here I feasted on a rare local rump with creamy local garlic prawn sauce while Vicki had the sesame-seed encrusted Atlantic salmon with a Greek salad. We valiantly tried to finish it all but, once again, we had to leave some on the plate.

The breakfast café over the street serves up an excellent breakfast, again country style, and coffee and amazing local pies fresh baked in the morning. The local servo is at the end of the street, about 50 metres away, filling the jerry cans with diesel was no problem. They also sell some grocery items and local vegetables.

The Ulmarra village has been the backdrop for a number of movies and the art store, op-shop, craft shops and antique shops reminded me of my grandmother’s house, but on a far huger scale. Good luck getting out of there without spending a dollar or three on something for Mum!

It is another 4.5 miles up to the electrical cables that cross Elizabeth Island. The sign says 17m clearance but friends with 19.8 got under right over near the river bank on the northern channel and Lucas’ guide says 19.8m.

There are three public ramps and a jetty just half mile past the cable. There is another jetty and ramp at 1.7 mile, where the locals have their moorings. Then there is the railway bridge with 8m clearance while another ramp and jetty are located at 2.8 mile up from the cables, again right behind the hotel.

Grafton is a major town, settled since the 1850s and has many heritage buildings, shopping centres, doctors and all the mod cons for reprovisioning if you do not mind a bit of a walk or bike ride through the flat town.

In October and November the jacarandas are in bloom and the purple coverage is a visionary treat. For maritime history buffs, the wreck of the SS Induna lies on the south bank: the boat that rescued a young Winston Churchill from the Boers in South Africa in 1899.

The inevitable trip back down the river allows you to revisit the spots, say g’day to new friends, sample some more fresh local cuisine and, after stopping the entire Pacific Highway for a second time, to haul up at Yamba Marina for refuelling and reprovisioning before heading out to brave the wilds of the Coral Sea and salt water once again.