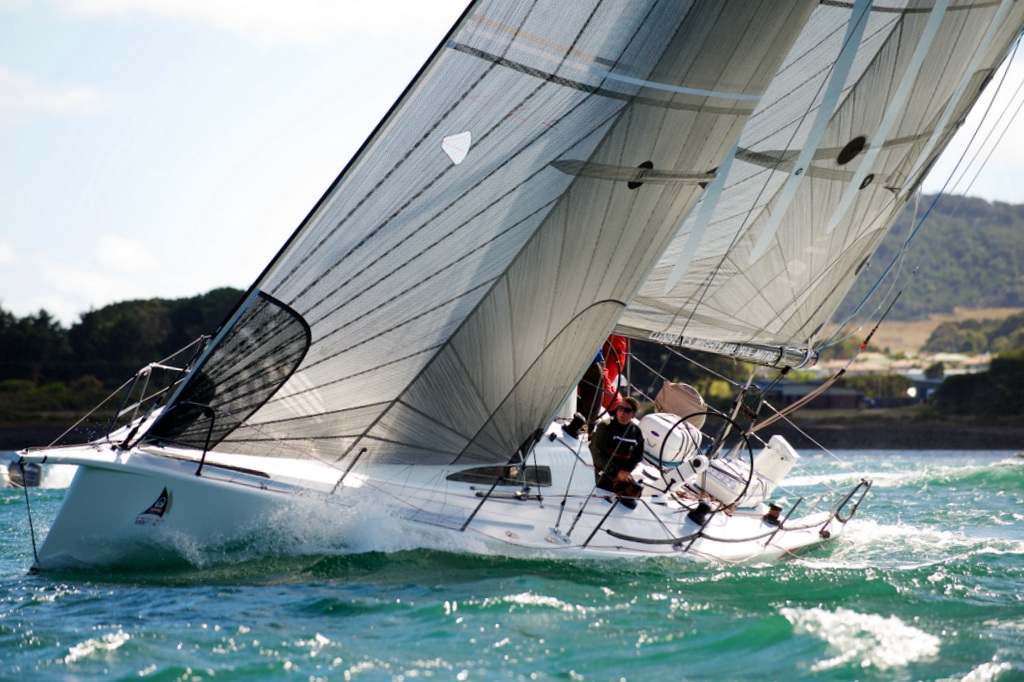 Fork in the Road powering to windward after the start last year on the Tamar River. Photo Dane Lojek.

A fleet of 30 boats, ten more than last year, has entered the ninth annual Derwent Sailing Squadron/National Pies Launceston to Hobart Yacht Race, which starts from Beauty Point on the Tamar River on December 27.

The 285 nautical mile race along Tasmania’s north-west coast, then down the east coast to finish in Hobart’s River Derwent, has attracted entries from southern and northern Tasmania and Victoria and includes two past overall winners of the Sydney Hobart.

Derwent Sailing Squadron Commodore Steve Chau officially launched the 2015 at a barbeque gathering of skippers, crews and their families at the Squadron’s Sandy Bay headquarters on Sunday afternoon. The official opening underlined one specific attraction of this ‘Tasmanian-grown’ race – it is family-friendly time-wise, enabling Hobart-based skippers and crews deliver their boats to the Tamar Yacht Club in mid-December, then enjoy Christmas at home and then travel north by road at a leisurely pace on Boxing Day for the start.

The Mayor of Launceston, Albert van Zetton will start this year’s L2H from a line near Inspection Head Wharf, Beauty Point, at 1.30pm pm on Sunday, December 27. The race will finish off Castray Esplanade, Battery Point, Hobart – the same finish line as the Sydney Hobart and Melbourne Hobart races.

Heading the 30-boat fleet is Gary Smith’s Bakewell-White 45, The Fork in the Road, which has taken line honours in the last two races and again favourite to be first home. However, the biggest boat in the fleet is Mistraal, Jacinta and Brett Cooper’s Beneteau 57, a racer/cruiser.

Jacinta will be the only female skipper in the race, heading a team of family and friends. Sailing with her parents is 11-year-old daughter Jorja Cooper and joining her will be another 11-year-old, Esther Read, whose father Fraser Read is also sailing on Mistraal. Both girls sail Optimist dinghies at Sandy Bay Sailing Club and have undertaken extended cruises on their parents’ yachts.

Bellerive Yacht Club Immediate Past Commodore John Mills and Ian Douglas have entered their Lyons 40. Nexedge, which as Micropay Cuckoos Nest won the IMS overall of the gale-battered 1993 Sydney Hobart.

An earlier winner of the Sydney Hobart and still racing under its original name is Ultimate Challenge. When owned and skippered by the famous Victorian yachtsman Lou Abrahams she won the race in 1989. Ultimate Challenge, a Farr 40 designed to the old IOR rule, is now owned by DSS member Peter Jenkins and has undergone a major refit in preparation for this year’s L2H.

Victoria again will have one representative in the race, the Archambault 31, Remedy, owned by Russell Hibbert from the Royal Melbourne Yacht Squadron.

Smallest boat in the fleet is Hydraplay, designed as a Mini Transat yacht and with a LOA of just 6.4m. Although the little yacht is below the minimum LOA (Length Overall) for the race committee has given owner/skipper Justin Hickey a dispensation because the yacht was designed and built for long ocean passage races, including the Mini Transat race.

The majority of the fleet represent Hobart yacht clubs but there are two entries from northern clubs, David Allan’s Sydney 38, Obsession, from Port Dalrymple Yacht Club and Lawless, Stephen McElwee’s Green 31 from the Tamar Yacht Club.

Last year’s overall winner under AMS scoring, Steelin Time, is not competing this year, but runner-up and winner of the PHS division, Paul Einoder’s Beneteau Oceanis 34, Off-Piste, is in the fleet again, as is Malcolm Cooper’s orange-hulled Snook 40, Kaiulani, which won the IRC division in the 2014 race.

Back from Queensland for the L2H is Peter Cretan’s Marten 49, Tilt, a yacht with as-yet untapped potential in long ocean racing.

Competing in the L2H after several recent Sydney Hobarts, is Anthony Williams’ IMX 38, Martela, which has been sailing impressively in recent Hobart long races.

The yacht that won the inaugural race in 2007, Jeff Cordell’s Mumm 36 is again competing – with good prospects of repeating that success. In 2007 she races as Host Plus Executive but Cordell has this season changed the name to B&G Advantage.