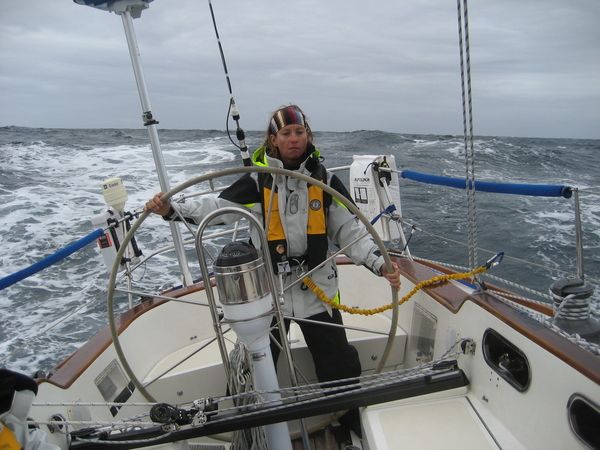 (Wednesday, July 1, 2015) – Among the first starters of the Transatlantic Race 2015, waterline length is prevailing. The 138’ Mariette of 1915 was first to reach the strong southwesterlies yesterday and is now thundering east, in a rich get richer scenario.

The century-old schooner was this morning midway between the start and the southwestern corner of the ice exclusion zone, aimed at keeping competitors away from the Grand Banks and its hazards of thick fog, fishing boats, and, not least, icebergs drifting south on the Labrador Current. Mariette of 1915 has also put some 160 miles on second placed Scarlet Oyster, the British Oyster Lightwave 48 skippered by Ross Applebey.

The 16 crew on Mariette of 1915 will be enjoying the nearest experience to the famous voyage of the schooner America 110 years ago, when America’s Cup helmsman Charlie Barr drove her to victory in the 1905 Transatlantic Race in a time of 12 days, 4 hours, 1 minute and 19 seconds (a record which was to stand for 75 years). Mariette is a tiddler in comparison to Atlantic, which was also a gaff schooner, but had three masts instead of two, and was 227’ long and almost twice the weight of Mariette, displacing 303 tons.

The northerly group that were ahead yesterday, have since been wallowing in light winds, handing the lead to Mariette of 1915 and Scarlet Oyster, now lying first and second both on IRC handicap and on the water.

However, in the process of rolling her old foe Scarlet Oyster is the 48’ Carina, originally the Nye family’s Newport Bermuda Race winner and Admiral’s Cup contender. Recently Carina’s trophy cabinet has expanded substantially through the success of her present owner, New York Yacht Club Commodore Rives Potts. Sadly, this year business commitments have prevented Potts from competing and he has handed the helm over to Rich du Moulin, who surprisingly is Carina’s only returning crew from Transatlantic Race 2011.

She may be jockeying for second place now, but Carina got off to a painful start and was left behind as Mariette, Scarlet Oyster and Dorade all dived southeast 24 hours into the race. As du Moulin recounts: “It became clear that they were heading south into more pressure, so we joined them later on, but they got there first and got the jump on us. Yesterday we finally caught up with Dorade and Scarlet Oyster. We are trucking very nicely now.”

Du Moulin remembers when Carina and Scarlet Oyster match raced around the entire course of the 2011 Rolex Fastnet Race. It seems very likely the two yachts, despite being 18 years apart in age, will repeat this now across the Atlantic.

This morning du Moulin reported that Carina was seeing 20-25 knots from the west southwest, still with an awkward sea. “This whole race has had a very active sea state with very sloppy conditions making for a lot of wear and tear on the boat. Even with just the jib up the waves are making steering challenging.” The surging and snapping meant they wore through multiple spinnaker halyards.  Otherwise the only mission critical problem was the watermaker breaking on Monday night, although this has since been fixed.

Another yacht that dived south late was the British Shipman 50, Zephyr, belonging to Michael Higgs Beach, Earl St. Aldwyn. 76 miles west-northwest of Carina, this morning Zephyr’s skipper David Sharples expressed relief that they had followed the leaders. They had been playing the eddies and had benefitted from one only to run into a wind hole yesterday. This morning they were seeing 20 knot southwesterlies, under an overcast sky following rain squalls last night.

Apart from a couple of generator issues Zephyr has been holding up well although this morning they had to back down to extricate a large piece of plastic that had wrapped around the keel.

Three days in, the crew has settled in well: “We are still on fresh food and we’ll probably start the freeze dried tomorrow,” recounted Sharples. “It is a cruising boat, but we still have limited room…. We have seen a lot of wildlife – pods of whale and dolphins.”

As to the weather ahead, both Sharples and du Moulin reckon that the southwesteries/westerlies are looking good to hold, with Sharples anticipating 18-30 knots for the next 48 hours. Du Moulin is more optimistic still: “We could keep them the whole way over, apart from intermittent light areas when fronts come through. Right now it looks like trade wind sailing! The remarkable performance is Mariette, which is loving the reaching. She is sailing about two knots faster than us. At that pace she should finish about 400 miles ahead of us!”