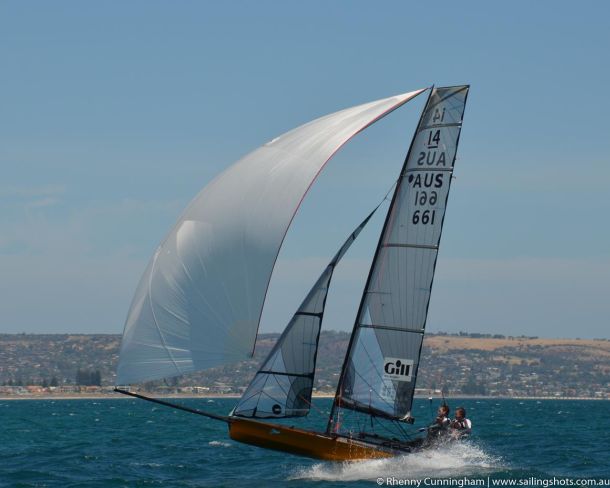 The International 14 class family are gathering in Australia for the 2015 World Championships and Australian Championships. Sixty-nine teams are converging on Geelong for the seven race series being hosted by Royal Geelong Yacht Club on Corio Bay from the 7th to 16th January 2015.

As the hustle and bustle of registration and measurement starts, there is a high level of joviality and camaraderie among the teams.

Reigning Australian Championship title holder and six-time World Championship competitor Brad Devine said the atmosphere is always good among the I14 family. “There are a group of die-hards that have been in the class a long time and who are the backbone of the class. I think that is one of the reasons the class has survived and has been successful for so long.

“Someone will walk away at the end of this regatta a World Champion and there are a whole bunch of people who want to be that person. While there is a great deal of camaraderie among the competitors there is also a healthy respect for their ability,” Devine said.

Alongside the home country contingent from all around Australia, there are 24 international teams. They are led by reigning World Champion, Britain’s Archie Massey. He is joined by another 11 teams from Great Britain, two from Japan and two from Canada, three from Germany, four from the USA and one from Italy.

Australian I14 Class President, Stewart Vickery, is delighted by the quality of the fleet to compete in Geelong. “Fifteen of the top 20 boats from around the world will be here.

“There are also quite a few young ones in the local class that haven’t been to a worlds or have only been to one so far. We hope they will come along and watch the worlds and see what 14 racing is all about,“ Vickery said.

Vickery has recently been under the knife for a back operation so he will spend most of the regatta observing, except for maybe one race day. “I have done 37 nationals in a row while there are a few out there who have done 32 or 34. If I stop now, they will overtake me,” Vickery quipped.

Royal Geelong Yacht Club’s Vice Commodore and chair of the event organising committee, Chris Williams, is delighted to see a fleet of both experienced and new sailors preparing to compete in the World Championship. “I am very impressed by the level of technology the skipper and crew deal with at high speed, in what could be very, very close competition,” Williams said.

Williams is also looking forward to seeing some of his club’s youth get up close to the exciting I14s, the experience of which may open new doors for some of them. “Our young sailors have been invited to have a look at the boats and go for a sail. Weather permitting we hope to get this happening on a lay day.

“We want them to get first-hand experience of the drama, the thrill of the class and to better understand their sailing future after Cadets and perhaps after 29ers and other off-the-beach classes,” Williams added.

The club has arranged a warm welcome and extensive social program for the visiting sailors and their supporters. A day visit to tourist hotspot Torquay for beach activities and Aussie pub meal, a pub-crawl through some of Geelong’s most iconic venues with unique transport from one to the next and a winery tour, lunch and a visit to an well-known local brewery for drinks are just some of the regatta’s extracurricular activities.

The Practice Race is on Wednesday 7th with the racing commencing the next day. The forecast for the start of the regatta is for east, south-east, 10 knots gusting to 16.