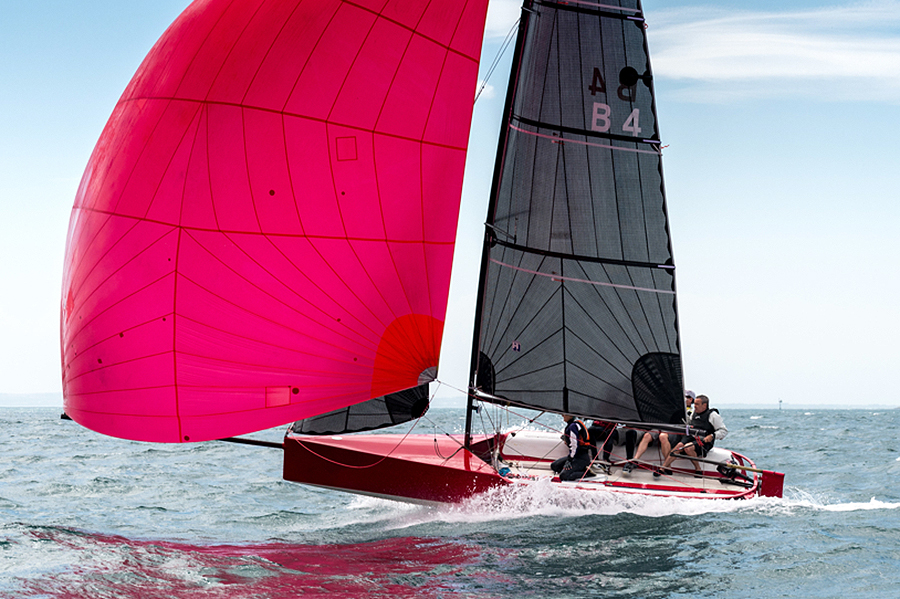 They’re usually harder to herd than cats, but as many as 20 crews will contest the Australian Sport Boat Association’s (ASBA) national titles from April 7-9 as part of the 2017 Sail Port Stephens race week.

At the same time, around a dozen super-charged Super 12s will vie for their NSW state title, the strongest fleet to date.

Both associations represent a myriad of models from different designers, all coming together under development umbrellas but with rating systems to level the playing field.

At ASBA regattas it’s common to see early-90s veterans like Elliott 7s and Magic 25s competing with cutting-edge newcomers such as Shaw 650s, Viper 640s and VX1s, the Jamaican sprinters of the yachting world.

Association president Chris Bland reckons sport boats are the “only way to fly”.

“My Shaw is 6.5-metres long and carries 850 square feet [80 square metres] of sail downwind. We regularly see 15 knots but the best I’ve had is 32 knots – frightening to say the least, but it can be done.

“Being a development class, we also have guys constantly pushing the limits of the rules, which is what we’re encouraging.”

Southport sailor Graham Sherring’s Retuned began life as a Leech 650 but has since sprouted wings and been extended to a 750. Similarly, last year’s national champion Reo Speedwagon is a hotrod VX1 production class that also was upsized – it can clock 7.2 knots upwind.

“Again, it’s a development of a development,” Bland adds. “But there’s science involved because it has to work within a formula. You don’t just screw a feet extra feet to the back of your boat and hope it will be faster.”

Bland says Port Stephens was chosen as the regatta venue due to its central location for owners trekking from southern Queensland and Victoria.

“Last year the regatta offered some spectacular sport boat sailing and this year won’t disappoint either,” Bland adds. “We’re going to have 10 boats, no risk, but more likely 15 and as many as 20. At last year’s nationals in Queensland we had nine boats, so it’s looking better.

“There’s a good chance we’ll get a nice mix of conditions. My boat relishes 8-10 knot winds upwards, while characteristically the heavier boats do well in the light airs because they have the momentum to push through.

“Timing-wise it also works well for us being the week before Easter – most of our boat owners are aged 30 to 60 and have young families, so it means they’re free to spend Easter at home.”

The Association is offering a Performance Handicap (PHS) system for the nationals in a further incentive to boost fleet numbers. Its AGM will be held after racing on April 7, including discussion on the Association’s future direction.

Most of the competitors will be based at Soldiers Point Marina as Port Stephens Yacht Club is hosting post-race drinks. An accommodation deal has been struck with nearby Salamander Shores hotel.

Meanwhile, Super 12 association representative Mitch White says their fleet is rapidly gaining traction thanks to a PHRF handicap formula, which is working well among a raft of performance boats up to 40 feet.

“In IRC it’s hard for a 40-footer with a high rating to compete with the newer and larger boats, whereas PHRF is performance based,” White, a crewmember aboard the well-known Shaw 11 Little Nicho, said.

“We did a 50-minute passage race last Sunday on Little Nicho and won by 17 seconds against a Melges 32. We sat on 22 knots for the entire four-mile run, so that’s impressive handicapping.

“In another regatta last November, the difference between first and third was 30 seconds after a 2½-hour passage race.”

“No one is designing to a rule because that quickly makes boats obsolete. It’s all about having fun and going fast without stress,” White adds. “You don’t have to continually tweak your boat, but if owners want to try things we’re not going to stop them. Go for your life.”

They are planning windward-leewards on the first and last days of Sail Port Stephens, and the Broughton Island passage race on the Saturday. The association is also hoping for a Super 12 division at Airlie, Hamilton Island and Magnetic Island later this year.

Sail Port Stephens is supported by the NSW Government through its tourism and major events agency, Destination NSW, along with Port Stephens Council, Pantaenius Insurance and Garmin. See www.sailportstephens.com.au.