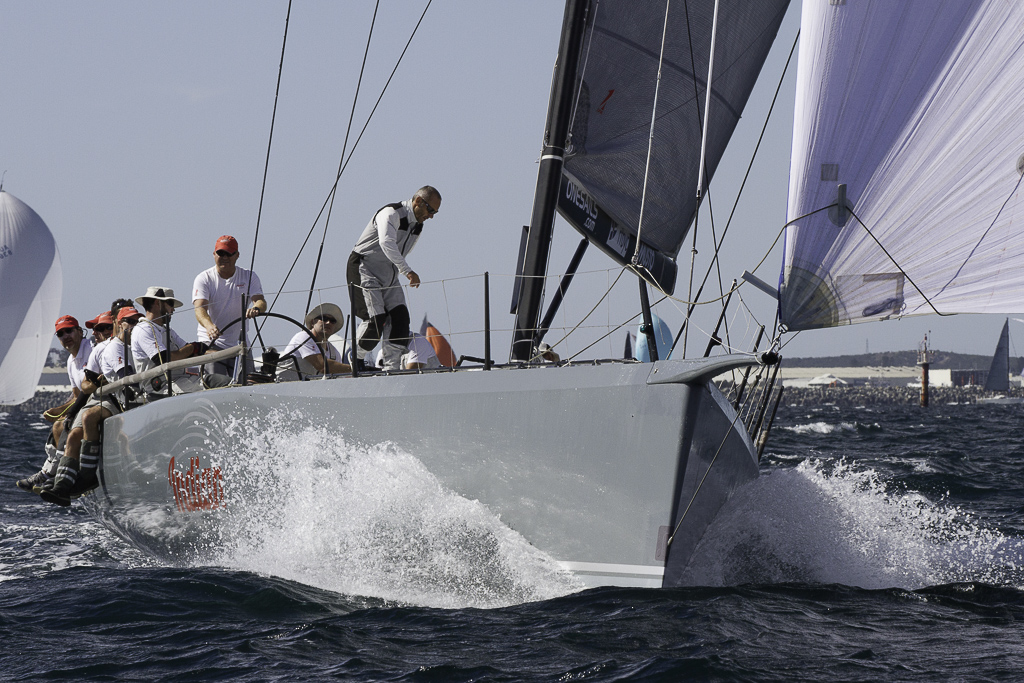 Fremantle Sailing Club’s West Coaster Race attracted a competitive fleet of twenty offshore yachts last weekend. Weather forecasts promised fresh easterlies for the race from Fremantle to Lancelin and return, but easterlies at the start turned to the south and then southwest at 25 knots plus, giving yachts an exciting spinnaker run up the coast.

Craig Carter’s Indian set the early pace, starting solidly to lead the fleet around the windward mark before powering away with Alan Stein’s GP42 Dirty Deeds in hot pursuit. They arrived at the Lancelin turn buoy within ten minutes of each other before starting the long slog home. As darkness fell however, the breeze reverted to the south east, bringing with it easier sailing conditions.

Alison Stock’s double hander Selkie was an early casualty, mechanical issues forcing her retirement. Worse was to come for Mark Nagle’s Weapon of Choice, which had a sensational ride north, surfing at 20 knots or so but losing her rig within sight of the Lancelin turn buoy. The yacht needed assistance to return to shore. It was a sad ending for the new yacht, which has shown great promise in several outings this season.

The eventual handicap result will be decided in the protest room, with several requests for redress to be considered. The Lancelin turn buoy, for the second successive year, moved from its original location. Early arrivals rounded the buoy which though moving, was within sight of its charted position, but from there successive yachts found it more and more difficult to locate until race officials were alerted to its movement and directed remaining yachts to round at the charted position while the local volunteer sea rescue unit retrieved the errant mark.

Indian went on to claim line honours ahead of Dirty Deeds, which holds the IRC first place unless results are changed in the protest room in a few days.