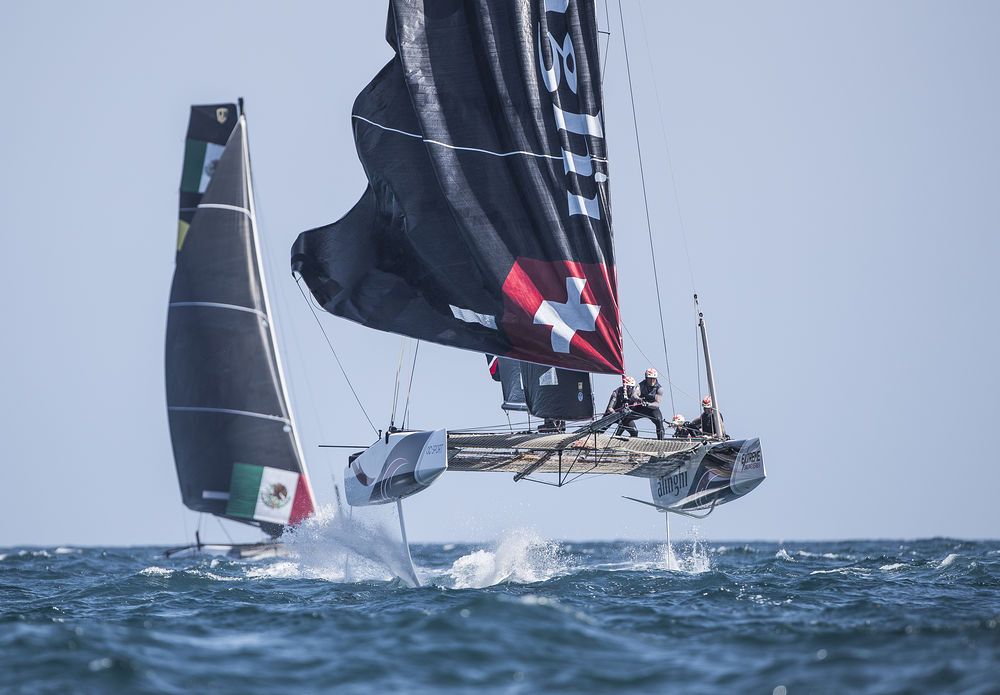 The first day of the 2018 Extreme Sailing Series Act 3, Barcelona did not disappoint, with big breeze propelling the high-speed GC32 catamarans around the course from the word go.

Incredible wind and boat speed throughout the day saw the teams fly towards each mark, using clever tactics to push past their competitors at each busy rounding. Foiling at full-pelt, hitting speeds of up to 26.2kts, these boys meant business.

Red Bull Sailing Team Sport Director, Hans Peter Steinacher, was thrilled with today's results, the crew having suffered a few blows to the points in both Act 1, Muscat, Oman and the GC32 World Championship in Riva del Garda, Italy.

“The team is young and the sailors play on the playground out there,” he said. “This is how you win Extreme Sailing Series events. They are focussed – you have to create your own mode but as a team, we are really strong.”

“There's always more to work on though,” added a cautious Roman Hagara, the team's skipper. “Still, if we keep doing what we're doing, we'll be fine.”

The Austrian contingent hopes to improve on last year's result in Barcelona, where they eventually finished third after a tough battle with Oman Air.

“The conditions were really tricky out there today,” Skipper Phil Robertson explained. “Staying stable on the foils is difficult in a relatively big sea state. It was actually very hard to get the boat in a good mode and sail simply. We'll be working on that for tomorrow.”

Current Series frontrunners SAP Extreme Sailing Team sailed true to form once again, finishing the day just behind Red Bull Sailing Team in second. However, it was all eyes on comeback kids Alinghi in the final races, following issues with their mainsail that caused a retirement from race three, and prevented their participation in race four. They were pulling no punches upon their return to the racecourse, snatching a win from Red Bull Sailing Team in the fifth race of the day.

“We are super happy with today's results; being able to fight it out with all these boats, and face these sailors, it has been a success for us.”

The home team closed the day in sixth overall, just behind British-flagged INEOS Rebels UK. Team México round up the fleet.

Over on the Flying Phantom racecourse, it was Idreva Zephyr Foiling who took the top spot, finishing ahead of current leaders Team France Jeune.

“A great day for us. It was challenging for sure but overall we were pretty consistent with our results – it was a good start for us.”

With hopes of continued breeze for tomorrow, the teams are already deep in the debrief after today's action. The Flying Phantoms are due to begin racing from 12:15 CEST, with the GC32s scheduled for 15:00. The free-to-enter public Race Village will be open from 10:00, offering food from the Van Van market and refreshing drinks from the public bar, both provided by Estrella Damm.