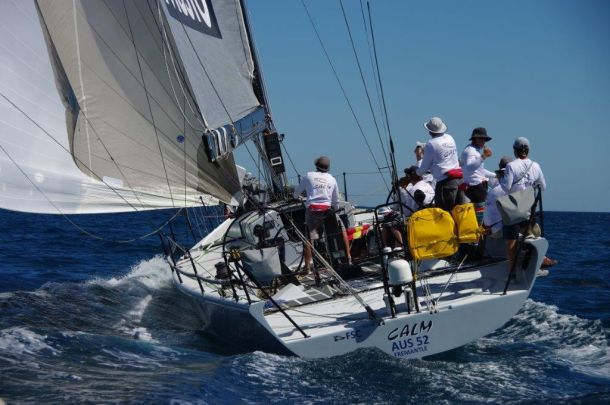 Owners and crew of WA’s IRC rated yachts will gather at Fremantle Sailing Club on Friday evening for the Briefing and Welcome Cocktail Party to mark the start of the Pantaenius Australia 2015 WA IRC State Championship.

The 2015 event will be contested off Fremantle from Saturday the 20th of June over four weekends with a mix of passage and windward-leeward racing. While the Cocktail Party is sure to be a fun filled evening, it will be serious business for race day one with a great line up in all divisions.

Current holders of the Siska Trophy, WA’s premier Blue Water series, and winners of both the Fremantle to Albany and Anzac Commemorative Albany to Fremantle races, Calm will no doubt prove to be tough competition. But tough competition she may have from the Indian Sailing Team. The Carkeek 47, owned by Craig Carter, is new to WA waters but has already left her mark with a recent line honours and IRC win in the Fremantle to Bali Race. Her team is well prepared for the IRC Championship this year after a full summer of racing including the Rolex Sydney Hobart Yacht Race. The two will meet for the first time at the Pantaenius Australia 2015 WA IRC State Championship.

While this battle goes on there will be others in the running like Alan Steins competitive GP 42, Dirty Deeds and current WA State Champions on-board Dave Walling’s IRC optimised Farr 40, The Next Factor.

In Division 2 there are some top sailors on the water for the contest. By & Large owned by YWA President Denys Pearce, The X Factor and Kraken all carry some great yachtsmen who are known to be quite competitive and may provide some close racing for the spectators.

All up, 27 yachts will compete across three divisions and a double handed division in the series which will conclude in early August. Four weekends of racing over the next two months could bring anything as far as weather conditions go. The early forecast for race day one is showing moderate winds, but there are thunderstorms around. One things for sure, the winter waters off Fremantle will be an ideal stage for some great yachting.

Event sponsor, Pantaenius Australia, is very pleased to be the main sponsor of the series this year. Since the arrival of the company to the WA coast, their services have been well received on to the local scene by all yachties, from serious inshore and offshore racers to blue water cruisers. While there will be some fierce competition on the water, there is sure to be some friendly comradery on shore. The Pantaenius boat will be out on the water in support of the championship and are looking forward to getting in amongst the action.