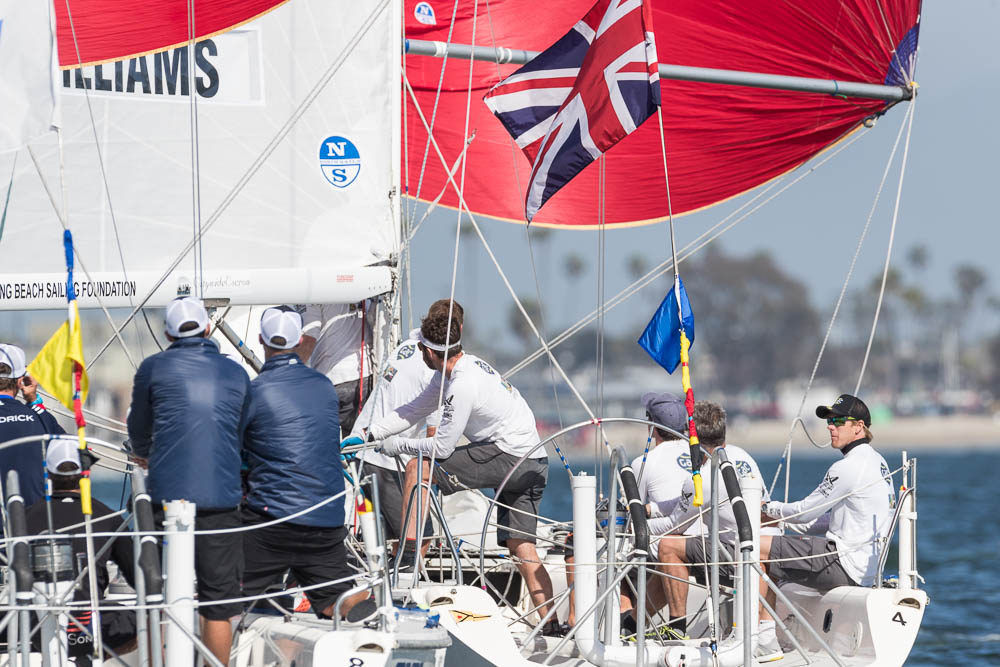 “Choices are the hinges of destiny,” goes the famous quote by Edwin Markham, and today’s Congressional Cup racing proved that making good choices can make, or break, you.

As the frontrunner after two days of Qualifying, Johnie Berntsson (SWE) elected to race eighth place Joachim Aschenbrenner (DEN). As swiftly as one-two-three Berntsson dispatched the young Dane; by nearly two minutes in one match. Similarly, second-place Taylor Canfield (ISV) chose seventh-place Scott Dickson (USA); and knocked him out in a swift trio of matches.

But Phil Robertson’s (NZL) pick of Sam Gilmour (AUS) as his pairing proved risky. Nearly too risky. Scrapping around the course, Robertson lost the first race. “After that I thought about changing my flight home,” he joked. But Robertson rebounded, and squeaked by in the next three; while Chris Steele (NZL) fell 1:3 to Ian Williams (GBR) – including one photo-finish.

Williams had been on a wild winning streak yesterday, which continued into Saturday as he advanced to the Semi Finals and took two points off reigning Congressional Cup champion Taylor Canfield (ISV). The series is first to three.

But going into Sunday’s races Canfield remained confident. “Do you know how many times we’ve won three in a row? A lot,” he emphasised, pointing to the morning’s defeat of Scott Dickson. “We can win three in a row against Ian Williams, no problem.”

Berntsson remained unflappable too, after two solid wins against Robertson in the Semis, in part due another good choice: a professional crew.

“He brought in some excellent guys, all pros who race over 150 days a year,” said trimmer Philip Kai-Guhle. “It makes a difference. Johnie can do whatever he needs in the back of the boat, and we just do what needs to be done in our part.”

As a result, Berntsson’s style is “very relaxed” added bowman “Ricky-Bobby” McGarvie. “He makes things easy on the crew, and even when we stuff it up, he’s pretty cool. We just move on to the next manoeuvre.”

Berntsson, Williams, Canfield and Robertson vie for the Congressional Cup, and the coveted Crimson Blazer. Of this field, three have already won it: Berntsson – 2009; Williams – 2011 and 2012; and Canfield – 2014, 2015, 2016. Robertson, the current World Champion, has podiumed in the Congressional Cup, but a win in 2017 would mark his first chance to don the iconic Crimson Blazer.

Saturday’s Quarter and Semi Finals racing took place in southerly 6-9 knot breezes that built to 14 knots from the South West, making an exciting penultimate day to the 53rd Congressional Cup.

Semi-Finals continue Sunday April 2, with light breeze and sunshine forecast. Racing is held off the Belmont Veterans Memorial Pier, where spectators can enjoy superb viewing of the race action, with live commentary, starting at 11:30 Pacific Time.