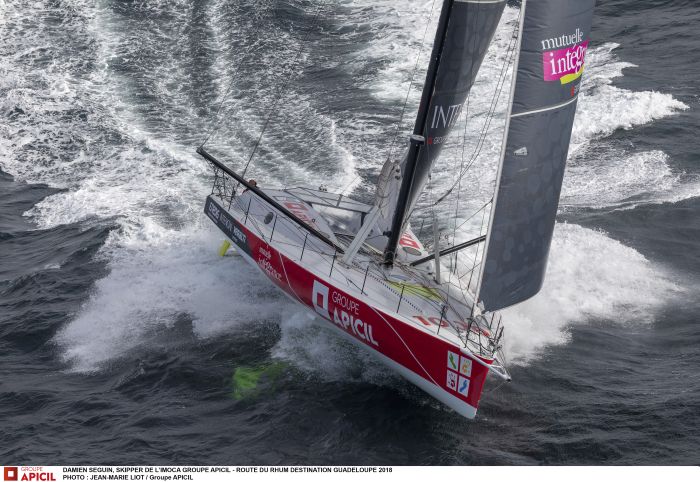 Those competing in the Bermudes 1000 Race Douarnenez – Brest are not all being treated the same this Wednesday. The first boats are still being shown the way by Sébastien Simon (Arkéa – Paprec), who is creaming along at an average speed of over 15 knots, propelled by a NW’ly wind of 12 to 14 knots, whilst the latecomers, and particularly those who are yet to round the Azores waypoint, are still battling through very light S’ly airs (between 2 and 5 knots).

Currently spread out over 380 miles, the fleet is likely to stretch even further apart as time goes on. But no matter, at every stage of the game the battle is raging among the fleet.

This Wednesday, the vast majority of the fleet has now negotiated the virtual course mark positioned to the North of the Azores and is on a direct route towards Brest on a beam reach. On this long tack, there are no major strategic options to try, so the skippers are having to see where some slight separation gets them.

Clearly, it’s all about speed right now and, for the time being, Sébastien Simon is coming off best, benefiting from a bit more pressure (a lot more even) than his playmates. This is reflected in the fact that the skipper of Arkéa – Paprec is pelting along at nearly 20 knots, whilst the tail end of the peloton is struggling to make headway at 3 knots.

“Not much wind and it's raining, but the swell is pushing the boat in roughly the right direction,” commented Miranda Merron (Campagne de France), who’s trying to cope as best she can with the light, erratic airs, which are extending out for about 120 miles around the Azores waypoint.

It’s a waypoint that just three competitors are still yet to round midway through the afternoon this Wednesday, namely Ari Huusela (Ariel II), Pip Hare (Superbigou) and Denis Van Weynbergh (Eyesea). Unfortunately, the latter is unlikely to round the mark for another ten hours or so because, in addition to a becalmed zone sprawled around his path, he’s no longer in a position to sail under full mainsail since his head lashing broke yesterday.

Damien Seguin suffered the same fate, but he managed to resolve the issue this morning. “I’d never climbed to the top of the mast alone, even in Class 40. First times are important! I had light airs at that point but there was still some swell, which created a lot of motion on the boat. I was really frustrated and I thought it was just too silly not to be able to get going again. I’ve had a great mano a mano with the other boats since the start of the race,” explained the skipper of Groupe APICIL, who has sorted out his issue but is now struggling in the light airs, the front runners having made good their escape.

It’s the same scenario for Manuel Cousin (Groupe Setin), he too having lost his grip on the little group made up of Clément Giraud (Envol by Fortil), Stéphane Le Diraison (Time for Oceans) and Arnaud Boissières (La Mie Câline), due to a slight issue with the keel. Indeed, a problem with the plate sealing the opening through which the keel passes has been preventing him from canting his keel fully since this morning.

“I’m going to finish the race by taking it gently so it should work out. It’s just that I can no longer can’t my keel, or only really in an emergency,” commented Manu Cousin, who is giving his absolute all to complete his race.

Fabrice Amedeo is not letting up one iota either. The skipper of Newsrest – Art & Fenêtres, who boasts around 50 miles of lateral separation in relation to the rest of the fleet is, for now, compelled to luff up due to his current sail configuration.

“Without my code zero, I’ve had to put in a bit more northing than my rivals. Since daybreak, I’ve kind of been getting over a rough patch in the light airs but it was forecast. This northerly positioning should later enable me to have a better angle to do some reaching. I’m playing the odds by making do with the cards I’ve been dealt! I’m going to dig deep today and then it’ll be a drag race to Brest. I’m telling myself that I may have a few moves I can play on my rivals in the sense that I have quite a quick boat,” stated the sailor, who fully intends to make the most of the increase in wind forecast for the early hours, but meantime he’s grinning and bearing it, well aware that there’s still everything to play for some 650 miles from the finish.

The same is true for Stéphane Le Diraison (Time for Oceans), who has been overtaken by Clément Giraud (Envol bu Fortil) in recent hours, but obviously is yet to have his final say. “My little playmates in front have more breeze and those behind have none at all… However, at times, the light airs have a few surprises in store. Clément, ten miles to leeward of me, just took off, whilst I remained pinned to the racetrack. It’s not over yet!” stressed the sailor.

A note on the ETAs (estimated time of arrival). The front runners will likely cross the finish line around midday on Friday and the first two thirds of the fleet should make the Marina du Château before Saturday afternoon.

Needless to say that in Brest, all the teams from the Brest Évènements Nautiques are already bubbling over with excitement at the prospect of reserving the warmest possible welcome for the solo sailors. In fact, it’s important to note that following the delayed start, the organisation has taken the decision to postpone the prize-giving, initially scheduled for Saturday, until Sunday 19 May at 18:00 hours.