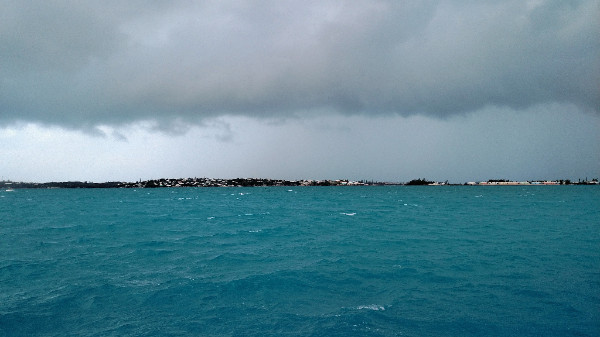 Strong winds and stormy weather on Great Sound forced the postponement of the first day of the Bacardi Moth World Championship.

HAMILTON, Bermuda — Day 1 of the Bacardi Moth World Championship in Bermuda was postponed today due to gale force winds.

A low pressure to the southwest of the island intensified overnight and brought heavy rains in the early morning hours and northwesterly winds steadily in the mid-20s with gusts of 40 knots.

“I’ve had a number of people ask what the course is, which is disturbing,” said Principal Race Officer David Campbell-James said at the 1000 competitors' briefing. “But we’ve decided the chance of racing today is nil so we’ve abandoned for the day.”

James has also issued an amendment to the sailing instructions that allow him to run up to four races per day.

“Since we’ve lost three races today we’ll try and do one extra race per day over the next three days to get back on schedule. That will allow us to keep the reserve day on Friday, Good Friday, which is a big holiday in Bermuda.”

The postponement affords competitors an extra day of tinkering with their boat and equipment. Mothists are renowned for constantly modifying their equipment and the world championship is the time to put those developments on display.

Ebullient Frenchman Benoit Marie, a naval engineer by trade, has designed and built a new boom in conjunction with European aeronautical giant Airbus. The boom attempts to make better use of the deck sweeper mainsail that is becoming common in the class. Class rules place maximums on sail area and luff length and the deck sweeper places more sail down low off the luff, between the gooseneck and boom vang.

“The boom is a bit heavier, maybe 2 or 3 kilograms,” said Marie. “I built it a little heavier so that it wouldn’t break. In future models we’ll lighten it up.”

The fleet features mainsails from KA, Lennon and North. The designs are trending on the flatter side to increase upwind performance but might come at a cost downwind.

“I’ve got a new North 3DI deck sweeper sail, similar to what KA is doing,” said Iain Jensen, who is a contender for the world championship after placing third last year. “It seems to go quite well above 12 knots but feels like its missing a little bit of grunt in the lighter winds.”

Jensen’s boom also has a plate on top of the outboard end to help clean up the end plate effect, similar (on a much smaller scale) to what the America’s Cup catamarans were attempting. Jensen said that the lack of grunt might be due to the lower rig height that’s necessary to accommodate the deck sweeper main.

“Due to the max luff length if you want sail area down low you have to cut some off the top,” said Jensen. “It’s only a few mils, but it feels like it’s missing the area at the top.”

Jensen, Paul Goodison of the U.K. and American Brad Funk are using the higher angle wing racks in an attempt to gain righting moment to increase straight line speed.

“I got the higher angle bars about the same time as the deck sweeper and noticed a big increase in righting moment,” said Jensen.

Underwater, Matt Struble of the U.S. has been designing and building new foils in the holy grail chase of more lift and less drag. Struble, who won the U.S. Nationals three weeks ago in Florida, has been working with a retired aeronautical engineer in San Diego, estimates he has designed and built nine sets of foils.

“The best part is none of them have broken,” said Struble, who’s hoping to win the Masters’ division at the Worlds. “They all seem to go well. We’ve been looking at sail planes, increase span, reduced chord lengths, aspect ratios, all of that stuff. I think they’re working quite well.”

The BACARDÍ® brand is part of the portfolio of Bacardi Limited, headquartered in Hamilton, Bermuda. Bacardi Limited refers to the Bacardi group of companies, including Bacardi International Limited. For more information visit www.Bacardi.com.