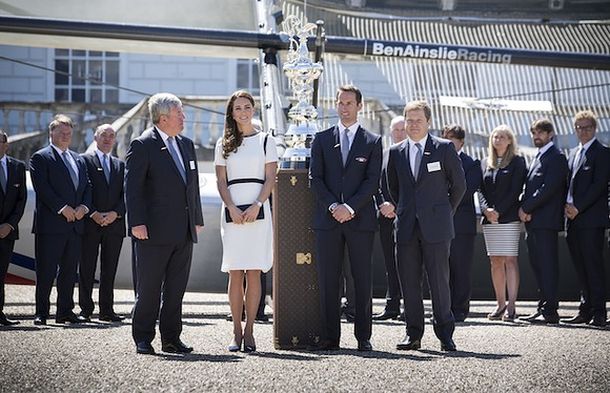 The Duchess of Cambridge at the launch of Ben Ainslie Racing. Photo Lloyd Images.

Charming, polite, every bit the sailor-cum-businessman, the clothes are perfectly pressed with not a hair out of place.

But it's the look in his brown eyes, the glare that offers a glimpse of the other side of sailing's Jekyll and Hyde.

His friend and America's Cup rival skipper Iain Percy once described him as the “most competitive man on the planet.”

And on an industrial estate in a small, understated office — quintessentially Ainslie — in Portsmouth on England's south coast, Britain's greatest ever sailor is plotting how to win the America's Cup.

“It's the same drive to win,” he says of Britain's bid to seal their first win in the event's 163-year history.

“Until we're on the start line we won't know for sure how we've done. It's exciting and terrifying so you have to keep the intensity.”

Even Ainslie admits to having different personalities on and off the water: “I'm pretty aggressive and I certainly wouldn't want to be like that on land.”

For full story head to CNN.