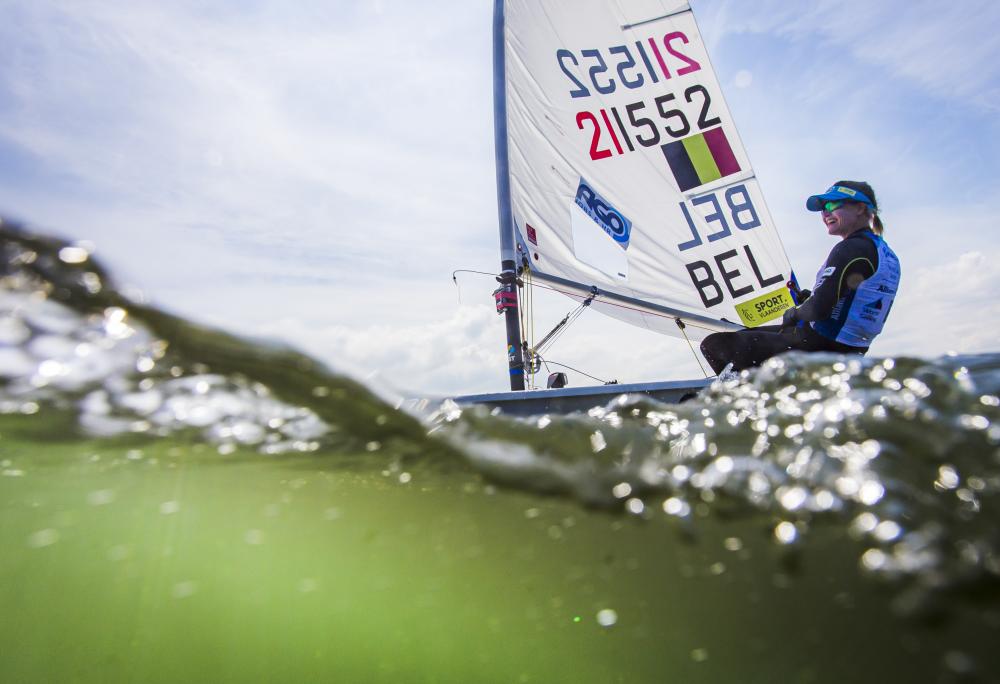 Amsterdam: Emma Plasschaert (BEL) shot up the rankings in the ILCA 6 fleet on day three of the Hempel World Cup Series at the Allianz Regatta.

Like many of the favourites in the 57-strong women’s singlehanded dinghy class, the reigning world champion from Belgium had a tough start to the regatta with two scores in the 20s, but she bounced back today with a second and then a race win.

This puts Plasschaert in third overall, a point behind Vasileia Karachaliou (GRE), but still some distance behind the overall leader, France’s Louise Cervera who has read the conditions like no one else. Today Cervera scored 3,2 and sits on just 12 points overall, and even her current discard of 16th is superior to that of her closest rivals.

The other race winner today was Mara Stransky (AUS), although the Australian’s wildly varying scores of 1,27 illustrate just how difficult it can be to find a consistent formula for success. For Plasschaert, her strategy was to get to the right-hand side of the first upwind leg as quickly as possible.

“I had good upwind speed and starting near the committee boat for an early tack to the right,” was how she explained her strategy. “I wanted clear air so that I could go fast, and we had probably the most stable breeze of the regatta so far, 7 knots building up to 13 knots of wind by the end of our session,” Plasschaert said.

Asked why it had been such a high-scoring regatta for so many favourites, Plasschaert commented: “The race course was next to the shore with an offshore breeze, which brings massive shifts and gusts, and just makes it very unpredictable.” Provided there are enough races in the series, Plasschaert and the other frontrunners hope that the luck will have evened out across the fleet.

Dominance in the Formula Kites

Annelous Lammerts (NED) might have slipped to eighth in one of today’s Formula Kite Women’s races, but the Dutch rider is able to drop that score as one of her discards. Bullet after bullet puts Lammerts well in the lead, while the battle for second continues between the two Israeli teammates and rivals, Maya Ashkenazi holding a three-point edge over Gal Zukerman.

The race that Lammerts didn’t win was won by Leonie Meyer of Germany, who manages to balance the demands of being a young mother with a professional kiteboarding campaign. Meyer moves to fifth overall, five points back from the multiple freestyle kiteboarding world champion from Spain, Gisela Pulido.

On opposite sides of the qualifying phase of the Formula Kite Men’s competition, Benoit Gomez (FRA) and Lorenzo Boschetti (ITA) dominated Yellow and Blue Groups respectively, each with a string of bullets to put them joint 1st overall. While another Italian, the 16-year-old Riccardo Pianosi struggled to match that kind of consistency, he’s doing well enough to sit in joint third overall with Germany’s Florian Gruber. At 28-years-old, Gruber is considered one of the veterans of the fleet, such is the young age profile of Olympic kiteboarding.

With the ILCA 7 World Championships having just been completed in Mexico, there was no point in having an ILCA 7 event in the Netherlands at the same time. Instead, the organisers introduced the RS Aero as an invitational replacement for singlehanded sailors who wanted a chance to compete in Almere during Dutch Water Week, this brand-new festival of sailing and water sports near Amsterdam.

Juliane Barthel (GER) had been leading after day one of the RS Aero competition but in the stronger breeze this afternoon it was time for local sailor Shivam Ramdas (NED) to step up. Three straight bullets in the modern singlehanded class have shot the Dutch sailor into the lead. Barthel was still enjoying the event though. “It was a last-minute decision to come and race here in this invitational class,” said Barthel, “but it’s really nice being here among the Olympic classes and talking to some of them after racing. The RS Aero is a great boat, more modern than the ILCA and a lot of fun to race.”

The forecast is looking good for Friday, the final day of fleet racing for the boat classes before their Medal Races on Saturday.

By Andy Rice for World Sailing