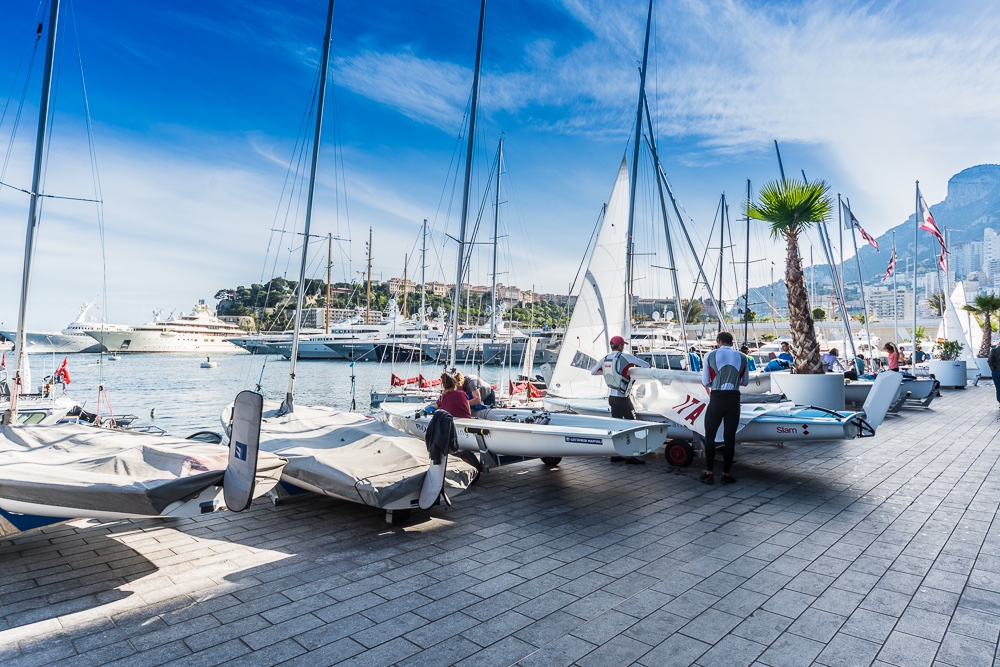 The 2017 470 Europeans marks the first time the Yacht Club de Monaco (YCM) has ever hosted an Olympic Class Championship, and there is no doubt the organizers are determined to put on an impressive experience for all.  An international fleet has descended at this first 470 Championship of the season, with 178 sailors representing 25 nations in the line-up.

Monaco is a glamorous venue for the Championship, combining the stunning superyacht marina backdrop to the 470 boat park, with racing unfolding in front of the world famous Monte Carlo landscape.

Italy’s Sveva Carraro summed up the ambience perfectly, saying, “These are very big yachts and our 470 is probably the smallest here in the harbour, so it’s quite strange for us. But we have felt at home since we arrived, it is something really nice here.”

Saturday night’s Opening Ceremony, hosted by Bernard d’Alessandri, CEO of YCM, together with board members Ernst Klaus and Alain Ucari reflected the spirit and motto of the YCM, “One Spirit, One Team, One Club”. After the presentation of nations, oaths were made on behalf of the Sailors by Cheryl Teo (SIN) and the Race Officials by Patrice Clerc (MON) before enjoying canapes and cocktails.

Who to Watch
Favourites in the 470 Men have to be Australia’s Mat Belcher/Will Ryan who swept the board at the recently held SWC Series Round 2 – Hyères. Fresh from a post-Olympic six month break, the pair will be looking to defend their 470 Open European title.

Earlier this month, Belcher and Ryan’s long held world #1 ranking transferred to the hands of Sweden’s Carl Fredrik Fock/Marcus Dackhammar, who have shown a massive escalation in performance since launching their full-time campaign for Tokyo 2020.

“It felt good,” smiled Fock on achieving their career best world #1 ranking. “It’s a step forwards for us this year and it’s nice that we are there. We are really happy. There is a little bit of pressure, but I think we can handle it.

“We did a lot of training in Rio with the other Swedish team and I think it was really good for us,” he added on their progress in the fleet. “We improved a lot last year and the hard work has really paid off this year.

Commenting on their strategy at the Europeans, Fock explained, “We want to keep it simple in the beginning and really focus on the small details.”

The world #4 ranked pair, Greece’s Panagiotis Mantis/Pavlos Kagialis are always a force to be reckoned with, as are the #2 partnership of Jordi Xammar/Nicolas Rodrigues.

Last year’s European Champions were Sofian Bouvet/Jeremie Mion, with half of the team returning to defend their title. Rio 2016 Olympian Mion has partnered up with Guillaume Piroulle, and they have every ability to mount a credible bid for the Championship.

Amongst the newcomers to the 470 fleet are Portugal’s Costa brothers, Diogo and Pedro, who won the 2016 420 World Championships, and now make their debut appearance at a 470 Championship. Since transitioning to the 470 Class, their intensive training schedule has paid dividends, finishing 12th in a fleet packed full of Olympians at this year’s Trofeo Princesa Sofia. They have certainly put the 470 fleet on notice of their future potential.

In the 470 Women, the world #1 partnership of Afrodite Zegers/Anneloes van Veen (NED) have proved unbeatable since returning to post-Rio 2016 competition in January 2017. They have claimed five back to back wins, securing victories including the North Americans, SWC Series Round 1 – Miami, Trofeo Princesa Sofía and SWC Series Round 2 – Hyères. The closest they have previously come to victory at the European Championships was a 5th place last year, and the podium looks certain to feature their names.

The 470 Women’s fleet features six other Rio 2016 teams, so plenty of experience in the ranks.

With a new Olympic quadrennial, the next generation of talent moves on up. Italy’s Elena Berta finished 19th in Rio, and returns to the campaign trail with Sveva Carraro. The pair have raced two elite events so far this year, securing 5th place finishes in each.

“We have been very pleased with our recent results,” reflected Berta. “We hope to achieve the medal race here, but we can’t yet measure ourselves as there are many new teams. After the second day of racing we will have a clearer idea.”

Hoping to become Malaysia’s first ever female sailors to qualify to the Olympic Games in the 470 are Nuraisyah Jamil/Ashikin Sayed. Since pairing up in the 470, successes include a gold medal at the 2015 South-East Asian Games. They missed out on qualification to Rio 2016 and resume their mission for Tokyo 2020.

Never too Late
Proving you are never too old to sail a 470 are Greece’s Christos Mamtoumidis/ Giorgios Doulas. Sixty-one year old Mamtoumidis is a lifelong 470 sailor, whose past form rewarded him with three Greek National Championship titles. Racing with Giorgios Doulas, the pair came to Monaco straight from Bourgas Sailing Week in Bulgaria, where they finished 5th out of an 8 boat 470 fleet.

Reflecting on his time in the 470, Mamtoumidis said, “The first time the 470 Worlds were held in Thessaloniki in 1974 I raced there. And in 1981, 1982 and 1985 I won the Greek Nationals and then raced at 470 events around the world after that. Last year I competed at the 470 Masters Cup and we won the gold medal in the Grand-grand masters. And now we are here!”

Expectations are modest, as Mamtoumidis laughed, “I expect we will come last!”

A diverse fleet, newcomers and Olympians, young and those in more senior years, will make for an interesting leaderboard mix. The forecast indicates a predominantly lighter breeze regatta, and the renowned unpredictability of the conditions here on the Bay of Monaco are sure to heighten the race track game