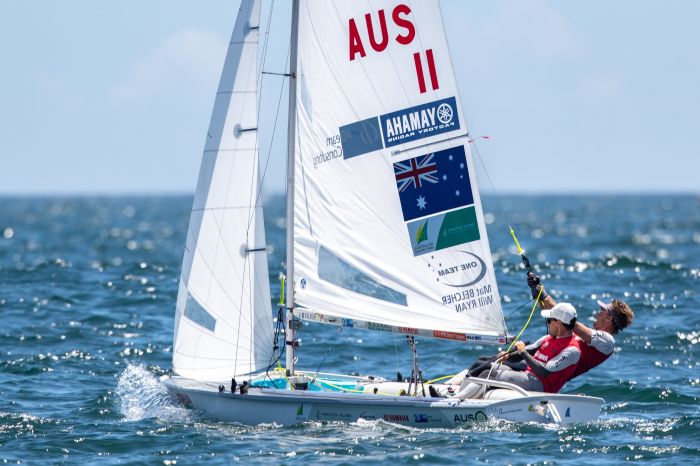 Mat Belcher and Will Ryan at the 2019 470 Worlds. Photo Bulkhead Magazine.

All change on race day 3, Tuesday 6 August 2019, at the 2019 470 World Championships and Olympic Qualification in Enoshima, Tokyo as the breeze kicked in and the waves picked up to bring in a whole new set of race track conditions.

A change in leader board standings for the 182 competing athletes representing 29 nations reflected the change in race track, as new faces made their assault in really physical conditions. Add to that the discard coming into play after race three and we see a significantly different leader board compared to yesterday.

The three back to back races saw some outstanding performances as teams battled it out in the steady 11 knot breeze, with gusts up to 13 knots. It was a tough day, tith the mercury nudging 30 degrees and feeling hotter on the water.

Five races have now been completed for all fleets and racing continues on Wednesday 7 August 2019 at 1200 hours local time, with three races scheduled.

When the time came, Jordi Xammar/Nicolas Rodriguez (ESP) put their foot on the pedal, with some impressive downwind speed, owning the track to take every race win and shift up to nail the overall lead. Second to multiple World Champions Mathew Belcher/Will Ryan (AUS), with Giacomo Ferrari/Giulio Calabrò (ITA) in third.

A smiling Xammar couldn’t quite believe his luck, grinning, “We are not used to this!”

He added, “It was a really good day for us and we are really happy with our speed in upwind and downwind. Also, I think we have to thank our coach Gidi who did a really good work before the races to help us a lot to understand how the race track would be working.

“But now everything starts with gold fleet, so we will just keep doing what we did today. We didn’t do that much different, had good starts, good speed, nothing special which is good. We were also a bit lucky at important points of the race, like we found a bit more pressure and the shifts, but always you need this luck to win.”

Today, the men’s qualification series wrapped up and the heavy hitters now advance to face off in the 26 boat gold fleet racing, with the other 26 teams in silver.

Positioned just one point behind Xammar/Rodriguez, the Aussie duo of Mathew Belcher/Will Ryan scored 2,1,2. Importantly they also hold the lowest discard score of the fleet, a 4th place, which may just come in handy later on in the Championship.

Belcher said, “We are very pleased. We were just trying to get out of qualifying with some good results and I guess the real event starts tomorrow. We are looking forwards to racing the main guys. We are happy.”

Talking through the race track conditions, Ryan commented, “Today was a standard Japanese sea breeze style of day. A little bit of swell left over and three pretty long races so a long tough day. It is going to be tough the next three days.”

Heading into his third Olympics and with a bag packed full of Olympic and World Championship medals, Belcher remains the legend of the class. But the young talent around him are pushing relentlessly.

“It’s great to see the younger generation come through and really start to show a new level of sailing and I guess a different style than what we have seen before,” continued Belcher.

“For me it has just been brilliant, because I have been in the class long enough to really enjoy the challenge of these young guys coming through. They are really talented and I am trying to hang on as much as we can, but it is pretty impressive to see how many young teams are in the top group.”

One of those young teams is Italy’s Giacomo Ferrari/Giulio Calabrò who are in third from their 1,3,4 performance and seeking to impress their nationals selectors, as they duke it out for Olympic selection against team mates Matteo Capurro/Matteo Puppo who are lying 19th. There are few more events to go yet though until decision day.

Leading the men’s fleet after race 4, from scores of 2,2, Paul Snow-Hansen/Daniel Willcox of New Zealand then dropped to 6th overall after finishing 10th in the final race of the day.

“Enoshima turned it on, champagne sailing really,” said Willcox. “Warm and wearing rash tops, stretching out in some breeze. It was good fun and we really enjoyed today.

“The conditions here are very different to where we normally sail. At home we sometimes get nor’easterly on-shores with a bit of swell but most often we have offshore flat water stuff, so for us it is really good practice being here in the Olympic venue training in some swell. It’s awesome.”

Explaining their 2,2,10 scorecard Snow-Hansen said, “A lot of it came down to the start as usual. Once you got your nose out the front, it was a little bit easier but it was a big battle in the last race. We split left and struggled to catch up, so us and Luke Patience had a great battle around the race course trying to eat away at places, and Luke got the better of use for once.”

The British duo’s advantage gave them a 7th place in race 5 compared to the Kiwis’ 10th.

In 8th overall, defending world champions Kevin Peponnet/Jeremie Mion of France are counting all top 5 scores, but in this fleet you need to do a bit better than that to see off title challenges.

At this point in the Championship, the nation’s positioned as the top four in the fight for the coveted Olympic qualification spots are Hungary, Turkey, Greece and Russia. But, points are super close and there is plenty of talent here to make Olympic qualification far from over until the last second of the last race. There is most distinctly a long way to go.

Control at the front of the 470 Women fleet changed race by race with nine different teams stepping up to a top three finish across the three races.

Consistency pays and Japan’s defending World Champions Ai Kondo Yoshida/Miho Yoshioka stood their ground to take their first race win of the series and edge into the lead on a one point advantage over Poland’s Agnieszka Skrzypulec/Jolanta Ogar.

“We had a good start which made it possible to race in the top of the fleet,” said Kondo of their win in race 4. “We were able to keep calm in the lead and manage the fleet.”

The pair felt they could have improved on their scores of 3, 15 in races 3 and 5 today, as Yoshika acknowledged, “I made some misjudgments today, but we corrected it and made sure to share information as we raced.”

A fantastic score card for the Polish team of Agnieszka Skrzypulec/Jolanta Ogar as they aim to lay claim to one of the six Tokyo 2020 places, walking away from the day’s three races with a 4,2,10.

“Of course the qualification is important for us, but of course the most important is sailing performance,” commented Skrzypulec. “So we try to focus on that and use everything that we can to catch boats and have a decent result. We aren’t really focusing on boats that want to qualify, we just want to sail a good regatta. There are so many nations and so many that can qualify, we just focus on ourselves. If you are strong enough, if you train enough, if you can predict the wind enough then the results just show your performance. We really like the conditions here.”

Ogar, who has taken to wearing a different pair of standout socks each day in the boat park and was interviewed in today’s post-race fashion offering of a rather fetching pink flamingo print, added, “Today was amazing. We had enough wind to all the time have Oscar flag free pumping on and we enjoyed the big swell and waves. We try to sail smart and not make too many mistakes.”

In third, three points behind the Polish is Rio 2016 Olympic Champion Hannah Mills (GBR) and crew Eilidh McIntyre who scored 1,9,9.

“It was exhausting actually,” said Mills. “The first race was similar to some of the racing yesterday, so a bit lighter and then the breeze picked up for the second two race and yeh just with the short chop and the waves and the pumping flag up it was super physical for everyone.”

The pair picked up their second win of the series in the day’s opening race, making them the only team with two bullets.

“The win was a bit hard actually,” said Eilidh. “It was a tricky one as the O flag was up and unfortunately we were a little bit far back on some boats and we managed to pump our way in good pressure and manage to get round just ahead. With the reach you are sort of away then and it was just a nice race.”

The gold 470 logo on their mainsail, accorded Hannah as the Rio 2016 Olympic champion, ensures the pair is unmissable on the race track.

“I don’t know if you feel people are watching you or not when you are going around the track. I think everyone feels like everyone tacks on them all the time, so I don’t know if that is just us, as I am sure everyone feels like that,” Mills laughed. “The competition here is that everyone is really stepping up their game for sure with a year until the Olympics. Being in the Olympic venue, I think everyone is pushing super hard this World Championship, so yeh we are really enjoying the fight.”

All in a day’s work for Olympic sailors, like most of the teams the pair is suffering from what Hannah referred to as “granny hands”, as the humidity, warm water and warm air takes its toll.

“It is though you have been in the bath all day!” explained Mills. “The problem is it just means they are shredding the whole time, so I have them taped up the whole day to just try and stop too many blisters. But slowly and surely the blisters are creeping in!”

France’s Camille Lecointre/Aloïse Retornaz won the final race of the day and move up to fourth overall.

Looking at the leader board in the context of the current top six unqualified nations aiming for their Olympic ticket, we have Poland, Netherlands, Switzerland, Australia, Brazil and Germany. Points are close and with two days of racing until the medal race, all pressure is on for teams to make leader board gains and avoid falls.