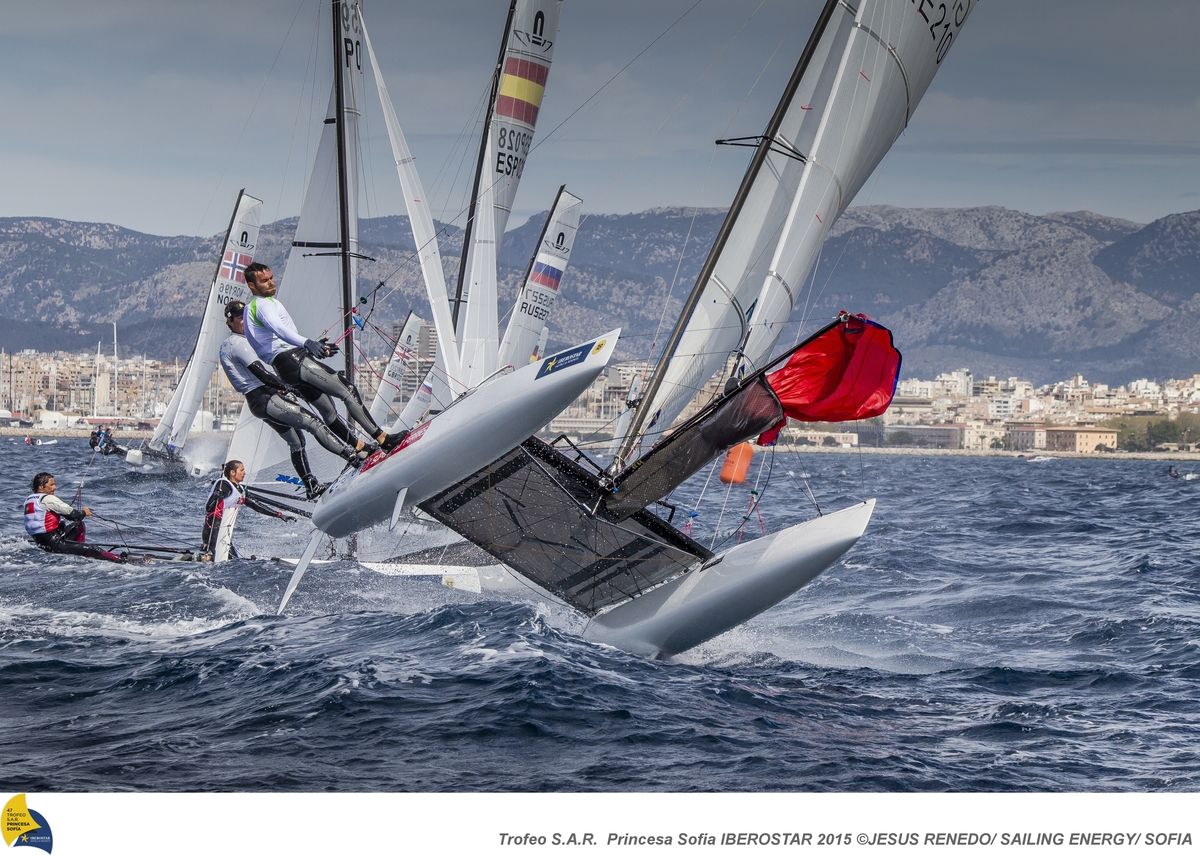 During the lead up to the Olympics when you are in a dominant position it is important to keep the pressure on your rivals imposing your advantage on each and every occasion. That was evident on the first day of the Trofeo Princesa Sofia IBEROSTAR where France's four-times Nacra 17 world champions Billy Besson and Marie Riou composed a perfect opening day with three back-to- back race wins in brisk, near ideal Bay of Palma conditions.

Last month in Clearwater, Florida the duo won the title with a day to spare, once again, and today as the key European season opening regatta started Besson and Riou were seemingly unstoppable in their preferred conditons.

Multihull ace Besson, who was born in Papeete in Tahiti, and Riou have been in the Nacra 17 since it was adopted to the Olympic fold in 2013 and have been the benchmark team pretty much since then. Behind Besson's sparky personality and perma-smile there is the ferocious work ethic shared by Riou which is keeping clear daylight between them and their rivals, particularly on days like this when the breezes are fresh.

“This regatta is important for us because it is the first in Europe and so it is a big rendezvous and we need to be here. The most important thing is to be showing good speed and to be sharp tactically to make good races all the way from the first day to the last day.”

“Everybody wanted to be here and they are, and so we have to be here doing our best every day.” Besson explains.

Robert Scheidt proved his campaign towards an incredible sixth Olympic medal is close to course when he won the Miami World Cup regatta in January. Since then he has optimised his time training on the Olympic waters of Rio but the Brasilian legend confirms that although it is vital not to overtrain and race too much in the Olympic season, he could not miss racing at the Trofeo Princesa Sofia IBEROSTAR.

“I have been training a lot in the lighter winds in Rio and so it is important for me to sail in stronger winds too. And so I struggled just a little today with the heavier airs. But it was a great day of sailing. I sailed here two years ago and it is such a wonderful bay to sail in, one of the best in the world in Europe. I want to be in the top three here at the end of the week. I had a good result in Miami.” Scheidt said today after his consistent pair of fourth places in the 12-16kts breezes and bouncy Palma chop.

“I think it is important to manage your time. Some people are focusing a lot to sail in Rio as much as they can. It is important to not just train in Rio but to do some events. I think this early in the season it is key to do big regattas like this. Conditions are nice, it is Spring in Europe. I will have a break and then I will probably also do Hyeres.”

Scott on top
The Finn class is at 90 per proof. World Champion Giles Scott (GBR) has not raced since November last year when he clinched the Gold Cup in New Zealand but opened today with a 1,4. Newly crowned European Champion PJ Postma (NED) lead both breezy, grunty Finn races but young Jake Lilley, chasing Australian selection took the first bullet of the regatta and Scott – who hit the front on the first downwind – won the second race:

Scott recalled: “I managed to get a good surf on the first quarter of the run and punch out into the lead.”
Of the Palma, 'to order' conditions Scott commeted:
” They are really good conditions. It's 2 o'clock and we are back on shore. In Palma that's unheard of. Normally we haven't even gone out on the water by now. So we are in for lunch, which is great.”

“This regatta is quite an important step for us as we did a lot of important work at the beginning of the year so we want to come here and see where we are at with the work, and hope it is moving in the right direction.”

” Ultimately you can convince yourself of something in training, but it doesn't really count until you race with it, so that's the main purpose of the regatta for me.”

USA and Aussies double top
In the Men's 470 Class the American pair Stu McNay and Dave Hughes, who won in Miami, and Aussies Mathew Belcher and Will Ryan monpolised the winning guns across the two qualifying fleets numbering 79 entries in total.

“It is the first day of qualifying so you have to keep it all in perspective. It is about part of the process.” smiled McNay, “But the winds were beautiful and strong, 15-20kts, big waves. We made clean starts, we were fast upwind and downwind. All the basics were done well!”

“Our selection is not done until after the European Championships. This regatta is about personal excellence, the goal is always to win!”

In the women's 470 fleet, the British Sailing Team's Amy Seabright and Anna Carpenter – who won the training regatta here and are training partners to Olympic silver medallists Hannah Mills and Saskia Clark – share the early lead:

“We had a breakage before the first start, the kicker pulled out of the boom, and so that was a tough one to fix.” explained Carpenter,

“But we did well. It was quite stable and the wind picked up through the day with some thermal enhancement and the wind pulled right a little bit in the first race. It was a boatspeed day. It is very different conditions to the training regatta so we are happy. This is a training event for us for the Europeans next week and so we are not focused too much on the overall result.”

Small lead
Ireland's Ryan Seaton and Matt McGovern have the smallest lead after the first three races of the 49er fleet, chased by four duos all one point behind. Austria's Nico Delle Karthe and Nikolaus Resch, silver medallists at the 2016 world championships behind the Kiwis, were happy with their opening which included one race win.

“It was what we wanted, a solid qualifying day. We had gusts to probably 18kts and the chop was getting up and so it was really fun sailing. There is no pressure on us here it is a build up to the Europeans.”

“Right side was favoured and whoever could cross the fleet today won. We did it well in the second two races once we realised that!” said Resch.

Gold medallists Nathan Outterridge and Iain Jensen (AUS) won the middle race which they partner to a 12th and 11th, while there was disappointing start to the regatta for GBR's Dylan Fletcher and Alan Sign. The duo who significantly enhanced their Olympic selection challenge with a bronze medal at the recent world championships in Florida, cracked the aft end of their port wing early in  the first race with their shiny brand new boat. They scored DNF, DNC and limped to a 21st with a makeshift, rough fix for the third. But with a little later afternoon composite repair they should be back in the mix Tuesday>

“Conditions were so difficult. We have capsized several times, in the first race when we were second, in the second race when we were leading. The most important thing is that we have come back without too much pain, just hurting a little.”  said Echegoyen who steered the Spanish women's crew to Olympic match racing gold in 2012.
The RS:X fleets sailed three races. 2011 World Championship bronze medalist Nimrod Mashiah (ISR) leads the men and Russia's Olga Maslivets tops the Women's fleet.