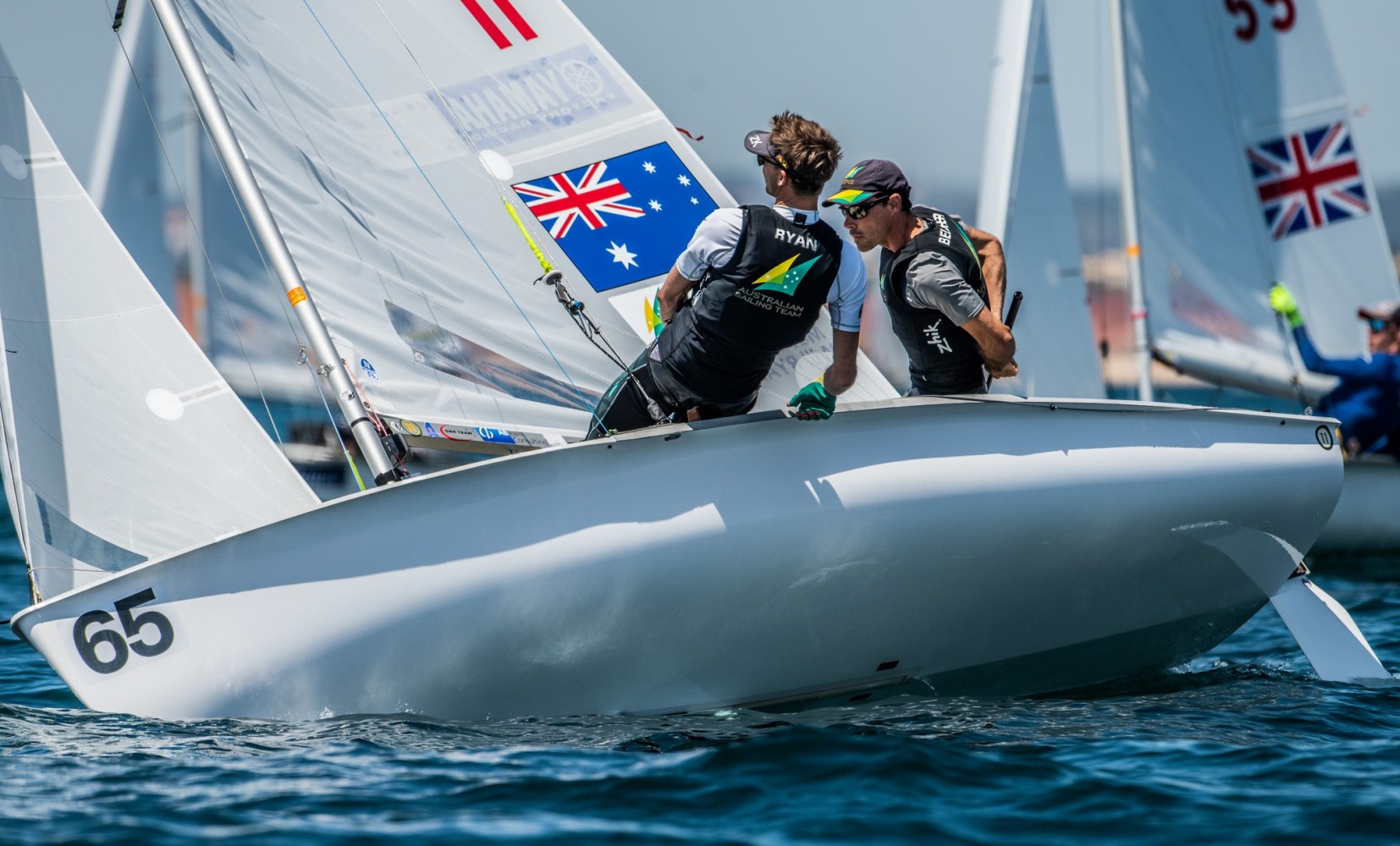 Australia’s hopes for a medal in the 470 men’s division at the Tokyo 2020 Olympics are pinned on class veteran Mat Belcher and crew Will Ryan and the pair found their rhythm on day two in Portugal after 18 months away from international competition.

Vilamoura, in the Algarve region of southern Portugal, delivered light southerlies in the afternoon and the 81 teams battling for positions at the 470 2021 European Championship completed two races.

Both representative teams and Australian Sailing’s Director – Tokyo 2020 Olympic Campaign, Iain Murray, appreciate the chance for international competition experience so close to the Games, Murray saying “it’s an essential part of our preparation as we aim to inspire the nation during these challenging times”.

The Australian pairing of Nia Jerwood and Monique de Vries posted their best result so far, an eighth in the first race on day two, Monday May 3, only to be hobbled by a penalty in the next race that added plenty of unwanted points to their net position.

Jerwood explained: “Our first race was quite good. We were making gains around the course, especially at high congestion moments. In the second race we started in high traffic and I misjudged a tack and duck, resulting in a two-turn penalty after the start. Our only option was to go right to try and catch the fleet but the wind shifted to the left. We caught up on to the back of the fleet but it wasn’t enough to pass anyone. The points are still really close and with six races to go anything is possible.”

Belcher and Ryan settled into the light air day and though it was testing in terms of patience and finding clear air at the compression points, they moved into third overall, behind the New Zealand and Spanish men’s teams.

“We had a good day overall,” said Belcher overnight. “Races were held in 5-6 knots and were high density, making it a key day in terms of event strategy. It was nice to come away with an 8 and a 3 and consolidate where we are on the leaderboard. It is going to be a high scoring event – we are just trying to save as many points as we can.

“It’s good for Will and I to build on yesterday; we feel like we are getting into a good rhythm and remembering what it was like to be back in competition after being out for such a long time. We are ticking off the boxes we need to before we head home.”

The 2021 European Championship format is 11 races and a medal race on May 7 for the 10 highest ranked boats. Live streaming starts tomorrow, then all the way to the Medal Race.