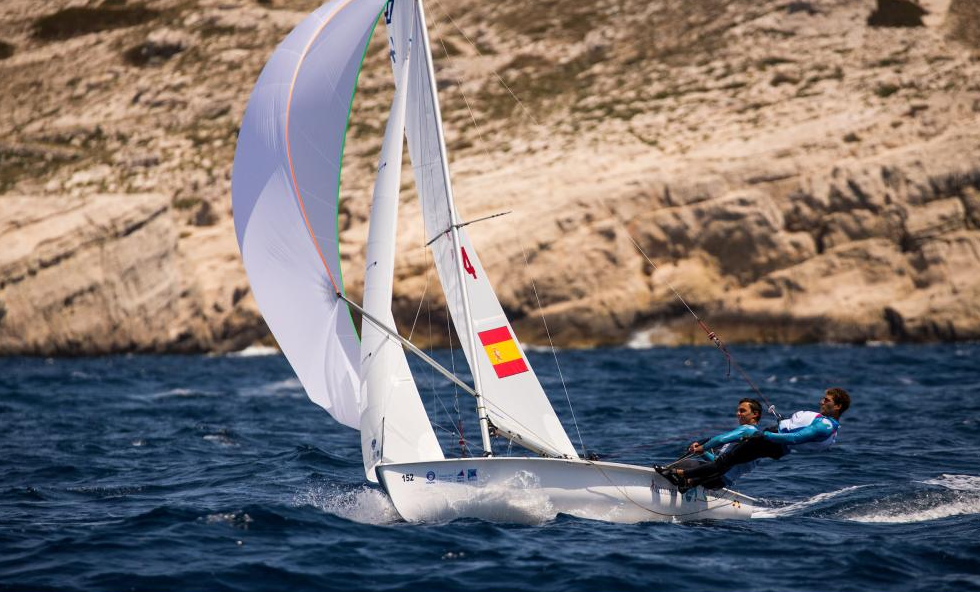 Spain’s Jordi Xammar and Nicolás Rodriguez got off to a flying start at the Hempel World Cup Series Final in Marseille, France, winning both of their races in the Men’s 470.

In a variable 7-12 knot south easterly breeze, the competitors from 41 nations, racing across the ten Olympic events and an Open Kiteboarding fleet completed every scheduled race on the opening day. In some fleets, there were some exceptional individual performances whilst in others, consistency was scarce at the early stage of the event.

Xammar and Rodriguez shone on the Marseillaise waters and were clinical racing in the 29-boat Men’s 470 fleet.

“We won both of our races,” expressed Xammar immediately ashore after racing, “It’s not normally like this. We’re happy with the day. It’s a good beginning but there’s plenty of races to go.”

The Spanish duo squeezed in front at the first mark rounding of the first race and were able to extend their lead and cover the pack. They took the race win, finishing more than 30 seconds ahead of Giacomo Ferrari and Giulio Calabrò (ITA).

The second race was not as straight forward. “We had to put in a huge effort,” said Rodriguez. “We managed to round the top mark in 11th and then we had to find a way to edge forward.”

Chipping in, Xammar exclaimed, “We had a bit of luck. You sometimes need a bit of luck to win races so this was also on our side.”

The pair did indeed edge forward as the race progressed, sailing to victory over Mat Belcher and Will Ryan (AUS) by just four seconds.

Xammar and Rodriguez won gold earlier in the year at Hempel World Cup Series Miami, their first ever World Cup title. They recently finished second at the Trofeo Princesa Sofia and are considered as contenders for the Tokyo 2020 Olympic Games.

Their recent success is the result of putting extended hours into their training programme and preparing under the watchful eyes of two 470 sailing legends.

“We’re working with Gideon Kliger and Juan de la Fuente,” said Rodriguez. “Gideon was a really great and experienced sailor with many medals in World and European Championships. Juan has two Olympic medals so we’re lucky to have them coach us within our team. They are key to us.”

Israel’s Kliger, a former helm, is a five-time World Championship medallist and two-time Olympian and Argentina’s de la Fuente won bronze at Sydney 2000 and at London 2012 as crew. The pair are as experienced as coaches come and have proven to be the guiding light for the young Spanish team.

“Juan is helping me quite a lot with the small details as a crew,” said Rodriguez. “He was a crew and one of the best in the world. Gideon has brought a calmer mood to the team which I don’t think we had before. We have a good balance in the team. Juan is pushing us quite a lot.”

“Juan is the one shouting,” smiled Xammar, “for training it’s been really good for us. Gidy is the one who we compete with and he keeps us calm. The combination is just perfect.

“It’s amazing, because you don’t lose yourself. When they say something, you have no doubt because we try it straight away and it works and they have so much experience. They have sailed the boat for over 20-years and the combination of an ex-470 skipper and crew is perfect.”

At the end of day one, the Spanish team lead Belcher and Ryan and Italy’s Ferrari and Calabrò by three points.

Consistency was at a premium in the Women’s 470 with no team able to replicate the Spanish teams complete performance.

Germany’s Frerike Loewe and Anna Markfort finished third in both races and hold the lead. Hannah Mills and Eilidh McIntyre (GBR) took the first race win of the week and are second and the second race winners, Afrodite Zegers and Lobke Berkhout (NED), are fifth.

Italy’s Mattia Camboni was as impressive as the Spanish 470 team in the Men’s RS:X after he clinched two race wins and a second, which he discards.

In the opening race of the event, Camboni was flying and led at every single mark to take a comprehensive victory. He had to work his way up the fleet in the second and third race but managed to do so with style. Angel Granda-Roque (ESP) took the third race win and is second overall, a point off Camboni.

Katy Spychakov (ISR), Megumi Iseda (JPN) and Bryony Shaw (GBR) took a race win each in the Women’s RS:X. Iseda added a second and a 17th, which she discards, and holds first overall. Nine races remain so movement within the fleet is expected in the coming days.

The French excelled on the water, winning two races and securing a fifth in the other. “Our goal is to stay at this level all week,” said Riou, “and we’ll see what happens at the end of the week. Today was a great day and we started well in every race. This made our life easier as we were towards the front early on and could build gaps.”

John Gimson and Anna Burnet (GBR) also took a race win and as a result of Tita and Banti’s disqualification are in second. Gimson was more relieved than anything back on land after racing, “We survived! It was that kind of day. The wind was quite inconsistent so there was a lot of luck involved. We’re happy with our average score.

“The French were going very well today. The Italians are always very good. This fleet is only really missing a couple of top boats so it’s a really great racing.

“For us, we’re trying to get in as much racing as possible before the Olympic test event. There are a lot World Champions here in Marseille and we want to be World Championa in the long run. “We’re learning as much as we can from the experience within the fleet.”

The 49er and 49erFX fleets both completed three of 12 races they have scheduled ahead of the Medal Race on Saturday 8 June.

After day one, French favourites Kévin Fischer and Yann Jauvin hold the gold medal position in the 49er after a fairly consistent day that saw them record a 9-2-1 scoreline. They discard their ninth place which puts them two points clear of Spanish brothers, Federico and Arturo Alonso.  Austria’s Laura Schöfegger and Anna Boustani and France’s Julie Bossard and Aude Compan are tied at the top in the 49erFX.

New Zealand’s Josh Junior and Andy Maloney shared the race wins in the 12-boat Finn fleet. At the end of the day, Maloney holds the lead on three points with Junior following on five. Eight fleet races remain ahead of Sunday’s medal decider.

Singapore’s Ryan Lo took the early advantage in the Laser fleet. He snapped up a second and a race win and is three points clear of the day’s other race victory, Zan Luka Zelko (SLO) and Italy’s Giovannia Coccoluto.

In the Laser Radial, Carolina Albano (ITA) recorded a first and a second to take the initiative. Viktorija Andrulyte (LTU) won the second race of the day to trail the leader by three points.