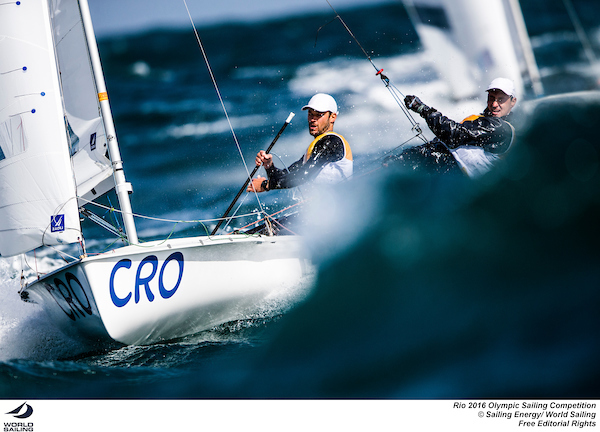 The Croatians in full flight in the 470 at Rio 2016. Photo Sailing Energy/World Sailing.

Unless a miracle happens during the 470 medal race tomorrow, Australia has failed to defend the Olympic titles they won at Beijing and London.

Croatians Sime Fantela and Igor Marenic have been the best crew in the class at these Games and fully deserve to win. They hold a very comfortable 11 point lead over Panagiotis Mantis and Pavlos Kagialis of Greece, meaning they need to finish sixth or higher to take Gold.

Defending champion Mat Belcher and crew Will Ryan are two points behind the Greeks, meaning they just need to beat that crew to claim Silver.

Because there are two threats, albeit minor ones, the Croatians won't be tempted to try the blocking tactics that backfired on their countryman in the Laser. They will simply continue to do what has worked for them so far.

Hannah Mills and Saskia Clark (GBR) lost the Gold at their home Olympics to Jo Aleh and Polly Powrie of New Zealand. At Rio they have reversed that situation, with Gold already in their pocket as they carry a 20 point margin over the Kiwis into the medal race.

It has been a miserable regatta for the defending champions, suffering a disqualification in the first race of the series for failing to take a penalty turn when they were convinced they had crossed clear ahead, and then being judged OCS by millimetres in Race 6. The have won four races, one more than the Brits, and can feel a little hard done-by.

But the British women have been very consistent and in a regatta that has seen extraordinary conditions, they are discarding an eighth as their worst score.

Although the British women have only to sail around the course to win Gold, the battle for the minor medals will be fascinating. Just six points separate 2nd to 6th, with Slovenia, USA, France and Japan threats to the Kiwis.

The Australian crew of Carrie Smith and Jaime Ryan were in touch with the top 10 in the early part of the regatta but have fallen away with high scores in the last four races to finish 13th.