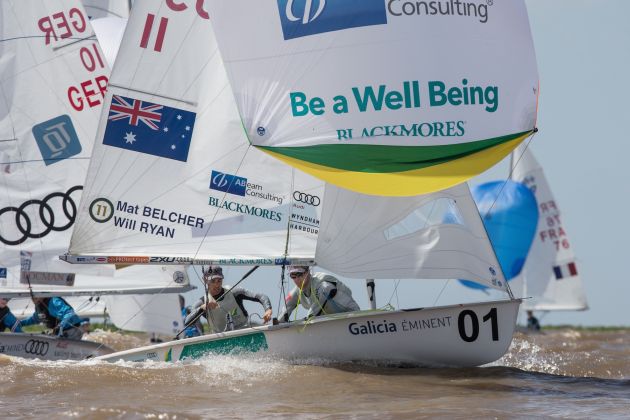 Belcher and Ryan in the murky waters of the River Plate. Photo Matias Capizzano.

It was a full day of racing at day four of the 2016 Men’s and Women’s 470 World Championships in Buenos Aires, Argentina (Thursday, 25 February local time) with the Race Committee getting in three races for each fleet.

A lot of weed on the course made for a challenging obstacle course for the crews, but defending World Champions and World #1 pair of Mat Belcher (QLD) and Will Ryan (QLD) coped well with the challenges to move into a medal position with two days to go. They are ranked third after posting a 7-4-6 series.

“It’s been another long day on the water. We launched at nine am and didn’t get back until four in the afternoon. The conditions were crazy with lots of weed in the water and pretty shifty breezes between 6-15 knots. And to be honest, with the conditions for the first two races, they should not have been raced. There was too much weed on the course to fairly race but we coped well,” Mat Belcher said about the challenges of the day.

“We had to go over a few islands up the first beat which hurt us a bit but we seemed to cope better than most. But when you have to clear both foils more than 20 times a race, it says something. The most memorable part of the day was when 30 coaches boats were trying to clear the weed by cutting it up with their engines just after the general recall prior to the next start”

“However, overall we had a good day and managed to stay out of trouble. To come away with the results we did today in the conditions we had, you can’t complain. Will and I are looking forward to tomorrow and try to close the gap to the leaders.”

New Zealand is currently sitting in first and eleven points ahead of Mat Belcher and Will Ryan, who still have one more day of final series racing ahead of Saturday’s double-points top-ten Medal race.

In the Women’s fleet, only four races had been completed going into Thursday’s racing and Australian Sailing Team’s Carrie Smith (WA) and Jaime Ryan (QLD) used the opportunity of a full three-race schedule to move up the ranks.

The pair started out the day with a 25th but finished with two top ten results – 8th and 10th to move from 18th into 14th.

“Today was an extremely tough day on the race course but overall we had a good day. We had two solid races and one where we got stuck with half the fleet in weed, which made it extremely tricky. We’ve been having big shifts and long days here, but we are keeping focused on our goals and trying to improve and learn every day in the tricky conditions,” Carrie Smith said.

In other World title events racing continued 2016 RS:X Men’s and Women’s World Championships in Eilat Israel, but only for Gold fleet.

Australian Sailing Squad’s Joanna Sterling (QLD) is in Silver fleet, but when the Silver fleets went out to have their races the wind weakened. The Race Officer tried to start the first race two times, but the wind stopped. After a while all were sent to shore, hoping to be re-called later. As the wind did not resume, this day was lost, and no races started for the Silver fleets.

Australian Sailing at the 470 World Championships

The 470 World Championships in Buenos Aires are the season highlight in the lead up to the 2016 Rio Olympic Games.

They have been a winning combination ever since getting together post the London 2012 Games and have continuously finished on the podium at every sailing regatta they have competed in.

While Mat Belcher and Will Ryan have already been selected to represent Australia in the Rio 2016 Olympic Games in the men’s 470 class, the women’s crew is yet to be selected. Australian Sailing Team’s Carrie Smith (WA) and Jaime Ryan (QLD) are vying for the spot and their selection over the next few months.

Racing at the 2016 470 World Championships runs from Monday, 22 February through to Saturday, 27 February with the world’s best Olympic 470 class sailors racing out of Club Nautico in San Isidro over six days. The format for the 470 World Championship is 11 fleet races, followed by a top-ten double-points medal race on Saturday, 27 February for the top ten teams advancing from the fleet race series.

Qualifying and Final series will be followed by Saturday’s top-ten Medal Races and prize giving.