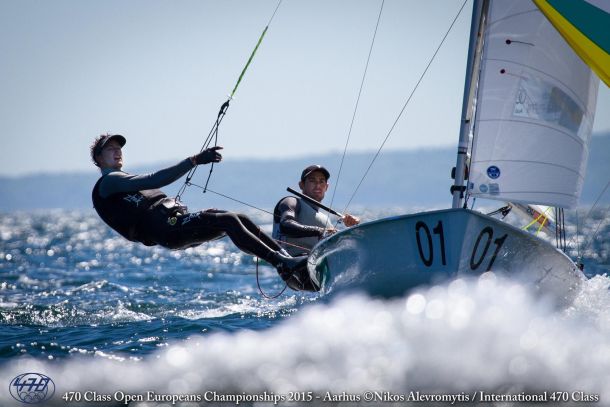 Belcher and Ryan at the 470 Euros. Photo Nikos Alevromytis

The Road to Rio will be tough here at the 470 World Championship, with just six nation places up for grabs in the 470 Men and 18 nations fighting it out. In the 470 women the percentages get even harder, with 13 nations contesting just three Olympic qualification places. The mountain to climb is big, but these teams are ready. This is what they have spent months and years preparing for.

Many teams have been gearing up here in Haifa for several weeks, and are now ready and waiting for the real action to get underway. Familiarity with the local racing conditions and an early sniff of the competition came in the form of the pre-Worlds warm-up event, the 2015 Israeli 470 Nationals, which wrapped up just under a week ago. No surprise to find the world #1 pairing of Mat Belcher/Will Ryan taking the men’s title, looking all convincing ahead of gunning for their third successive World Championship title as a team. A win at the 2015 470 World Championships, would make it six in a row for Belcher.

“The Israeli nationals were a great warm up towards the Worlds,” said Belcher. “We feel really comfortable at the moment. Our preparations have been good coming into this event and have been sailing well. Our goal is pretty simple – to win.”

“Everyone will be motivated at this event though with the days ticking down towards Olympic Selection and the Olympics themselves so I’m expecting quite a tough event!,” added Ryan.

In the 470 Women, Chile’s Nadja Horwitz/Sofia Middleon took victory, which was rather a surprise to the young team.  After a slow start, they stormed to victory to dominance in the final three races, giving themselves a confidence boost as they seek to secure one of the three 470 Women Olympic qualification slots.

“The end result was kind of a surprise,” said Horwitz, “because we planned the regatta race to race. But, we have been training for this event the whole year, so we are confident we have been giving as much as possible.”

The pressures of the 2015 470 World Championships are unique for each team. Some teams are already selected for Rio 2016, others are in the midst of their selection process to represent their nation, and numerous teams are sitting on the cusp of securing their nation’s Olympic ticket here next week. On the eve of the World Championships it all comes down to are they ready?

Amongst those in the sixty-two teams set for the challenge to unseat Belcher/Ryan, will be the USA’s Stu McNay/Dave Hughes. Ranked world #9, they won the last major Championship, the 470 Europeans in June, with Ferdinand Gerz/Oliver Symanski (GER) in second and the Australians in third.

The order was on the other foot when it came to the Rio Test Event in August, where Belcher/Ryan dominated and the Americans were in seventh.

The Greek pair of Mantis/Kagialis must be feeling a sense of déjà vu as they resume the battle with rivals Panagiotis Kampouridis/Efstathios Papadopoulos to get the nod to represent Greece in Rio 2016. They secured Greece’s Olympic slot for London 2012, but lost out to Kampouridis/Papadopoulos in the national selection process. This time around, their performance has been much more consistent, including bronze medals at the 2013 and 2014 470 Worlds.

A team yet to qualify their nation, is South Africa’s Asenathi Jim/Roger Hudson. They went through the pressure of Olympic Qualification going to the wire at the 2012 Worlds, so do not underestimate what lies ahead over the coming days.

“It certainly will be a massive showdown for the 6 qualifying spaces,” said Hudson. “We've had a superb six-week training build-up in Cape Town. We've also had a very useful week so far in Israel. We learned a lot about the conditions during the Israel Nationals and our performance level improved through the event. I think the conditions will make for very interesting racing, because the breeze is shifty and the pressure is variable so you need to be right on your toes. Now we are tapering down and getting rested and really looking forward to the event.”

In the 470 Women, world #8 pairing and defending World Champions are Lara Vadlau/Jola Ogar of Austria, who have enjoyed a meteoric rise since partnering up after the 2012 Olympics. Vadlau/Ogar won the 2014 Worlds, and with it became the first nation to qualify to Rio 2016.

“I never stopped to believe in myself and all my team around,” admitted Vadlau. “I always want to be the best, no matter what I am doing and I never stop working hard. Sometimes it's hard to keep on pushing all the time. But I have this huge goal, so you have no other choice than to keep pushing and train as hard as you can.”

Despite two rounds of injury in the past year for Vadlau, they have bounced back and arrive in Haifa fresh from training in Rio.

“We would like to finally sail a good regatta again, as after my second injury it hasn't been going that well yet,” explained Vadlau. “But slowly, slowly we are starting to find our perfect set up again, and we really can't wait to start this World Championship.  We aren't pressing that much on defending our title, because our biggest goal is of course next year to perform at our best. But, we always want to win, and we also came here to get a medal.”

Amongst the teams in the mix to stop the Austrian pair are the 2012 Olympic Champions and world #1 pairing of Jo Aleh/Polly Powrie of New Zealand.

“We've had a big year this year,” commented Powrie, “and the Pre Olympics was a big event for us as the warm-up to the Games next year. We have had a bit of time off since then, so are coming to Haifa maybe a little rusty, but very keen to have a great time over here!”

In the midst of their national selection are the two USA teams, world #5 pairing Annie Haegar/Briana Provancha and world #21 pairing Sydney Bolger/Carly Shevitz. At last year’s Worlds, Haegar/Provancha secured the USA spot to the Olympics, and this year successes included bronze at the 470 Europeans and winning the Aquece Rio International Sailing Regatta, so they know they have what it takes to beat the Kiwis. But their place on the starting line in Rio comes down to the USA selection trials, which will be decided from the top performance at both the 2016 470 World Championships in Buenos Aires and the 2016 470 European Championships in Palma de Mallorca, Spain.

“We are as prepared as we are going to be,” confirmed Provancha. “We have been working hard these last few months and things clicked in Rio for us in August. We are just trying to carry that momentum forward and keep learning everyday! We know what our potential is here and we are looking to perform. However, anything can happen in our sport and there are a lot of teams who could easily win this event so we will take it a day at a time.”

There are any number of teams in the forty-two boat 470 Women line-up who can stand on the podium come Saturday 17 October. Also counting within the pre-Championship favourite leading partnerships will be Hannah Mill/Saskia Clark (GBR), Camille Lecointre/Hélène Defrance (FRA), Afrodite Zegers/Anneloes van Veen (NED), Tina Mrak/Veronika Macarol (SLO) – but there are many other teams who have every opportunity to be in the podium mix.

In the 470 Women, the maths is 13 nations gunning for 3 Olympic Qualification places. In contention (based on the provisional entry list) are teams from: Australia, Canada, Chile, Spain, Finland, Germany, Greece, Israel, Italy, Poland, Portugal, Switzerland and Turkey.

Racing gets underway on Monday 12 October, with a qualifying and final series for the 470 Men who will be split into two fleets for the 11 races followed by the Medal Race for the top ten teams. The 470 Women will race a single series of 10 races before the top ten advance to the Medal Race on Saturday 17 October.

Racing takes place on Haifa Bay, along the Mediterranean coast of Northern Israel. After a week of breezy weather, the forecast is looking much lighter for next week’s World Championship series. What is guaranteed though, is an air temperature of around 28-30 degrees and water temperature of 28 degrees.