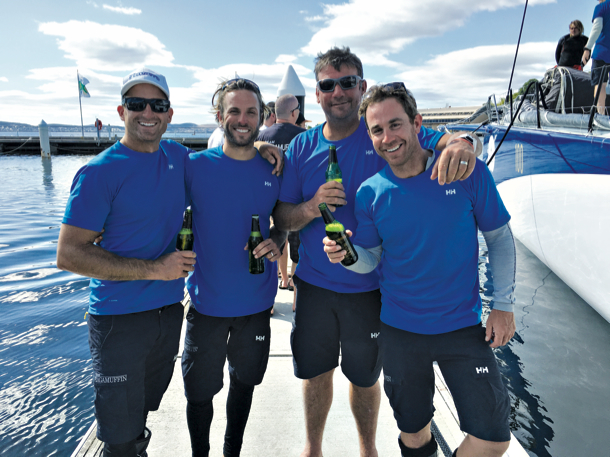 Some of the Ragamuffin 100 crew celebrate reaching Hobart with a cold beer.

For many Aussies exercise/sport and physical activity are closely linked with alcohol consumption.

Sport teams celebrate wins and losses with a few drinks, most weekend recreational sports often finish with a beer and a recap of the competition, especially in summer events and team sports.

A hard hot day of gardening or house work on the weekend is often finished with a cold one. Many physical trades and jobs conclude with a traditional knock off drink at the local to end the day or the working week.

And most yachting events are completed off the water with a few beers in the cockpit or into the rums at the yacht club bar.

But does exercise encourage drinking? Or could drinking encourage more exercise or activity?

Two new studies recently suggest that exercise may influence when and how much people drink. Drinking may even have an impact of whether that person may exercise, and the relationship between both factors could be a positive link.

Past studies have shown that people who exercise regularly also tend towards being alcohol consumers. A typical finding from a 2001 study showed men and women who had one to two drinks per day were twice as likely to exercise as those who did not consume any alcohol.

Researchers at Penn State University in the USA conducted an ambitious study with a group of 150 adult males and females from age 18 to 75. These volunteers were given a smart phone app to record drinking and activity daily, for 21 days. Over a year, and across varying seasons, each participant did three blocks of 21 days or around 65 days all up were monitored.

Upon crunching the data, a strong link was found between exercising on any one day and drinking some alcohol on the same day. This was even higher if the activity was longer or harder than the other usual day’s regular activities. These held true with no changes for summer, winter or spring or if they were male or female or aged in their 20’s or 60’s.

The conclusion by the scientists in their publication was…

“People drank more than usual on the same days they engaged in more physical activity, exercise or sport than a typical day”

A good outcome was the trend that overconsumption of alcohol was extremely rare and few heavy drinking cases were found.

But why is drinking and exercise linked? A recent Meta – analysis of previous experiments and studies at the University of Houston, discussed that both exercise and alcohol increase activity in parts of the brain linked to reward. The brain responds similarly to both activities, and the result of a “high” or feel good state tends to last longer when combined together closely in timing. More so than either single activity does alone. The lead author of the study suggested… “feeling a slight buzz after exercise, we may unconsciously look to prolong that feeling via a beer or wine”

Social bonding, team camaraderie and peer interaction is a major driver of alcohol consumption post sport – along with a feeling of reward afterwards.

The available evidence suggests that while exercise and sport encourages people to drink, the relationship is not a negative one as it is unlikely to encourage or lead to problematic drinking behaviours – but it is good to be aware of the strong interactions between the two activities.

Drink Responsibly
If you drink alcohol, always drink smart by using common sense to drink in moderation.
Regular, moderate consumption of alcohol can be part of a healthy lifestyle for most healthy adults.
It is not what you drink, but the way that you drink, how much, how quickly and how often.