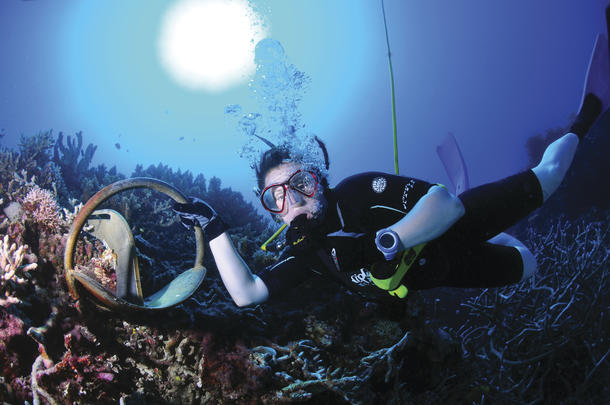 Avoid anchoring where there is coral where possible.

When cruising far north Queensland (FNQ), everybody wants to spend some time in the water on the reef.

Either scuba, hookah, free diving or snorkelling, we all love to experience that special outer reef world close-up. The biggest impediment is the daunting task of manoeuvring and anchoring near coral.

Whether you are planning your trip or just out and about, if you are within 30 to 40 nautical miles of population centres all the best anchoring and diving locations are covered with private and a smattering of public moorings. So, do you use an available mooring, anchor if there is space or just give up and go to somewhere quieter?

Hopping from one public mooring to another is an ideal way of visiting the reef.

The site does not give the mooring coordinates or stay time, so finding the buoys and forward planning can be difficult.

Moorings located near to the coast are used regularly and are easy to track down; if they are occupied there is usually reasonable anchoring locations near by.

The moorings further from the coast are not so easy, but exploring clearer waters calls for the effort. Recreational boats use these less than commercial operators who, provided they have public on board, are now permitted to use them under the same conditions. This can be frustrating when you see a private mooring close by not being used.

Public moorings in this area are four hours, except for Wheeler Reef which is two hour. This gives enough time for diving activities; if there at 5pm you are entitled to stay overnight.

The GBRMPA mooring policy was updated December 2014. The general thrust still encourages the shared use of all moorings, by all users, be they commercial or noncommercial.

It also now seems intent on weeding out non-compliant moorings, which generally are unmarked or missing its buoy and are often not maintained.

Compliant moorings need to have a reference number marked on the buoy. By checking the mooring register website: https://secure.gbrmpa.gov.au/ENQEXT/MoorSearch/DisplayMoors you can view the permit and, in theory, be able to contact the permittee (owner) to request usage permission.

The difficulty is most moorings are unmarked or, if marked, the contact details on the register are obscure. But if you are able to do a little research you may eventually track down whom you need to talk to. Where we have been able to contact the permittees they have been cooperative and forward planning has worked well for us. Mooring owners main concerns are: is your boat suitable for their mooring; will you trash the area; will you interfere with their own needs?

When out in the blue you will seldom have phone or internet reception; however, as most moorings are owned by only a few companies, it is sometimes possible to radio a nearby commercial vessel and ask to use a vacant mooring. You may get a helpful response, or you may be ignored or be given the run around.

When you are unable to contact the permittee and you are on the spot needing to decide whether or not to use that vacant private mooring or to anchor, you will need to balance several factors: it is an offence to damage coral on the GBR (something we all want to avoid) yet you are entitled to reef access plus be able to keep your vessel and crew as safe as possible. Versus legally you need permission to use a private mooring as the ground tackle is privately owned; in the advent of a dispute over your usage of a private mooring it is a civil matter between
you and the permittee.

A word from GBRMPA

“We would encourage people to be aware of reef protection markers that indicate areas where you can’t anchor and follow responsible reef practices for snorkelling and mooring on the Reef: www.gbrmpa.gov.au/visit-the-reef/responsible-reef-practices.“

GBRMPA also informed us they shall make the link to the Private Mooring Register easier to find but, because of privacy legislation, cannot improve the actual contact information!

Wheeler Reef: approximately 18°47’.713S 147°31’.279E. Plenty of swing room, The reef was decimated by Cyclone Yasi in 2010 and the glorious coral garden was wiped out. There is still reasonable deep diving. Beware of strong tidal currents at times.

Miln Reef: approx. 16°47’.310S 146°15’.961E. Plenty of swing room. The buoy is well away from the reefs edge. Some interesting coral heads if you are prepared to cover a wide area and the reefs edge is good snorkelling. A modest tidal current runs at times.

Flyn Reef: approx. 16°44’.053S 146°15’.908E. Plenty of swing room. A very busy reef for commercial charter operators with 10 private moorings. Several operators regularly also use the public mooring. If that is the case when you arrive, it is worth a radio call to one of the commercial vessels and, with a bit of luck, you may be directed to an unused private mooring. This reef is unsuitable for anchoring. Some good diving and snorkelling opportunities.

Norman Reef: approx. 16°25’.894S 145°59’.218E. Plenty of swing room. There is an interesting section of reef about 30 metres to the north of the mooring where nudibranch and flat worms are usually plentiful.

Michaelmas Cay: approx. 16°36’.289S 145°58’.433E. Plus approx. 16°36’.271’S 145°58’.421E. A third mooring is missing in action. The front mooring is close to the reef and if the breeze turns north be careful not to drift into coral. This location is very well protected even in very strong winds. There is interesting snorkelling and a pleasant beach. although access is restricted to 9.30am to 3pm in order to minimise interference to the 1000s of nesting terns. The many tourist boats depart about 3pm leaving a peaceful overnight anchorage.

These following three moorings, close to Cairns, are popular with recreational boats and, if in use, there are suitable anchoring locations over sand near by.

These moorings give excellent protection from SE trade winds, but are not suitable for overnight when currents can swing a vessel onto the reef during some tide and wind conditions.

There are opportunities to get up close and personal with big Potato Cod. But do not try feeding them your recent fishy catch while under water, when around food they grow bigger and bumpier and, if you survive their attention, there is a risk of getting your fingers bitten off by a reef shark!

Good diving, watch the current if you decide to swim further out into the passage.

At Mermaid Bay the buoys are easy to find but are only suitable during SE trades. The coral was trashed first by Cyclone Ida in 2014 and recently Nathan, so the diving is now poor.

At Lizard Island the buoy is located in Mrs. Watsons Bay. The area is all sand so the mooring seldom gets used.