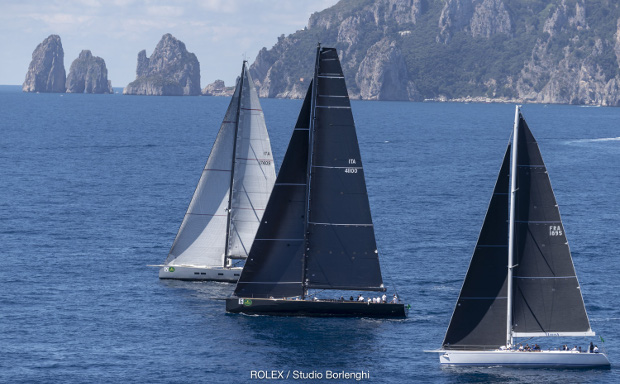 In the International Maxi Association-supported big boat divisions at Rolex Capri Sailing Week, Dario Ferrari’s Pepe Cannonball defied her IRC rating to score her third race win. Once again she beat, both on the water and on corrected time, the higher-rated Jethou and Caol Ila R of Sir Peter Ogden and Alex Schaerer respectively, on the regatta’s second day.

Racing got off to a false start when the two Maxi boat and Mylius classes were sent off on a course taking them from the Bay of Naples on a clockwise lap of Capri. However shortly after passing the Sorrento Peninsula and easing out into the Gulf of Salerno, the wind died.

Cameron Dunn, tactician on board Caol Ila R, described it: “We started the first race in a beautiful breeze, but it got weird when we went through the gap between Capri and the mainland: There was a complete glass out and we floated around for an hour or so.” With no sign of the wind filling in, the Race Committee abandoned the race and recalled the boats back the start area.

After a patient wait, the westerly sea breeze filled in, peaking at around 8-9 knots and the Maxis and Mylius classes were sent off on long windward-leeward with the leeward mark set deep into the Bay of Naples, off Sorrento.

Once again the Italian heroes on Pepe Cannonball stole a march on their opposition. Taking time off from his America’s Cup duties with Luna Rossa, regular tactician Vasco Vascotto was on board today and said of the second race: “We had a very nice conditions with 9-10 knots and this bay is fantastic – in a Limoncello mood!”

Pepe Cannonball won today by more than six minutes on corrected time after two and a quarter hours of racing. “We are pleased about our speed,” Vascotto continued. “Last year we learned about our sail shapes and now the boat is going faster and faster.” While her rivals in Capri have sped their boats up and are now racing out of class, Pepe Cannonball is still a Maxi 72. “Our owner wants this – ultimately the class is very strong and will come back strongly in the future, like the TP52 did,” says Vascotto.

Caol Ila R was second again. Owner Alex Schaerer commented: “The second race as okay in wind as forecast. Cannonball – downwind we can match them, but upwind they point higher.” Schaerer is a big fan of racing here: “Capri is perfect especially on a day like this when it sunny and not raining and there is a little bit of wind.”

Of their competition his tactician Cameron Dunn observed: “Cannonball is a lot newer and a lot more powerful. They have new sails and some mods and it is working for them – they are very powerful upwind. We’ve made some nice starts, but just can’t hang with them.”

Like Pepe Cannonball in the Maxi Racing Class, so Roberto Lacorte maintained his perfect scoreline on his Vismara 62 SuperNikka among the Maxi Racer Cruisers. For the remaining podium places today once again Jean-Pierre Barjon’s Swan 601 Lorima 1895 came home second while in third was Spectre, today with Tara Getty joining owner Peter Dubens on board.

“We had a good fight with SuperNikka,” said Spectre tactician, double Olympic silver medallist Nick Rogers. “We had good starts and first upwinds and then they snuck ahead of us. On the downwind they are normally a bit quicker but we kept up with them, gybed down the shore and went around the leeward mark close to them. They tacked on us a couple of times, which was good fun, and we tacked right into the shoreline, to get the compresision there. We got ahead of them again, but then I don’t know what happen – we tacked and just crossed them, but then they went through to leeward of us…”

Unlike the Maxi classes, in Rolex Capri Sailing Week’s championship for Mylius yachts, today there was a third winner in Aldo Parisotto’s Mylius 65 Oscar 3.

After making some mistakes in yesterday’s two windward-leewards, the Oscar 3 crew got their act together today and very much enjoyed the longer course as well as benefitting from Vincenzo Addessi's Fra Diavolo, winner of yesterday’s first race, being over early.

“We had a good start and made no mistakes. Paolo our tactician made the calls well,” said Parisotto. Former America’s Cup helmsman, Paolo Cian, heralds from Naples and comes with valuable local knowledge. “There was slightly more breeze close to the coast which is where we gained on the first downwind,” he explained.

Overall in the Mylius class, a second place for Vittorio Biscarini’s Mylius 50 Ars Una has edged her ahead of Fra Diavolo, which finished third in today.

Racing continues tomorrow with another coastal race scheduled for the Maxi and Mylius classes.