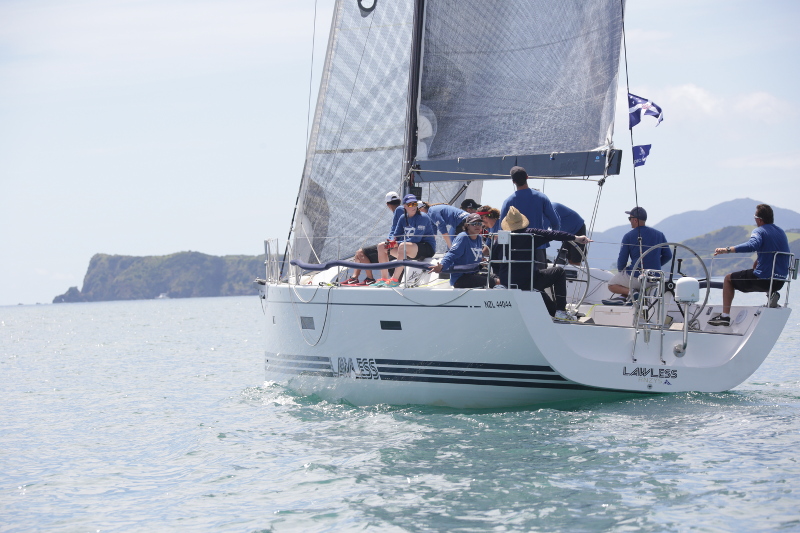 The RNZYS Youth Development squad on Lawless sailed to victory on IRC in B division. Photo Will Calver - ocean photography.co.nz.

Breakfast wasn't the only thing on the minds of the 1,000 or so sailors taking to the water today for the final day of racing in the Bay of Islands Sailing Week regatta. Today was the decider, with everything still to play for in many divisions.

For A and B divisions it was especially important, as today's races marked their final chance to claim glory as IRC National Champions.

But on the water it was a case of hurry up and wait, as boats drifted aimlessly on a windless race course. Some courses were moved closer inshore to take advantage of a developing sea breeze, but by midday there was still barely more than a ripple on the water, and race organisers set about shortening courses. In the meantime, there was plenty of time play, as competitors relaxed in the sun, went for a dip, and even gave their boats a last minute scrub.

Racing eventually got underway just before 1pm, as the sea breeze developed to a fresh 10 knots, which remained consistent across the sailing area for the rest of the day.

On the outer course, crews were obviously eager to get underway, some too eager, resulting in several recalls. The first start for A division was subject to a general recall, and in the subsequent start, Viento was forced up by Beau Geste, pushing them over the line early. For Viento, who were sitting in second place at the end of day 2, sitting out the first race of the final day must have been a painful experience, as they watched their silver medal sail away from them.

With Beau Geste seemingly untouchable at the top of the board, first place was a foregone conclusion. But with the other podium positions almost anyone's to claim, there was tight racing and intense competition throughout the A division fleet.

In the end, it was the new Beau Geste, which despite damage sustained in today's tussle with Viento, went on to win the remainder of today's races, and take first place on both IRC Class 1 and PHRF handicaps.

On PHRF, it was Kia Kaha in second place – a tremendous achievement for an entirely amateur crew – and V5 in third.

B division's first race started cleanly, with the RNZYS Youth Development Squad on Lawless nosing out in front. With first place less of a certainty than in A division, competition in the B division fleet was fierce, and the pressure must have got to some, as there were a few less than slick manoeuvres around the marks.

The second race saw a tight start, except for an individual recall for Carerra, who still came back to finish ahead of most of the fleet. And in race 3 it was Kerikeri boat, and the smallest boat in the B division fleet – Deep Throttle – who got a taste of victory on General Handicap and PHRF.

In the final results after day 3, it's Lawless who will be crowned IRC National Champion Class 2 in B division, while Icebreaker takes first on General Handicap, and Simply Red 2 came first on PHRF.

Vodafone enjoyed a great start in the first race, but soon lost the lead to Marwin after a laboured first tack. Marwin capitalised on their lead and opened the gap further, romping home ahead of Vodafonen with over a minute to spare.

In the second race, a pile-up at the start resulted in individual recalls for Vodafone and Yahoo Serious, giving Marwin and Arriba the advantage they needed to sail home for an easy win over their class rivals.

Race 3 went similarly, and in the final results, it's Marwin sitting at the top of the table.

In the other divisions, the day's racing was a wholly enjoyable one, despite the late start. For the most part the went without incident among the smaller boats, although one E division boat probably does deserve a mention for her spinnaker disaster, which took some time to rectify. It should be noted, however, that owner David Krebs was sailing his Elliott 5.9 Frivolous Fish single handed in the final day's racing – a sterling effort considering the boat is normally sailed with a crew of three.

Full results from the three days of racing, plus combined series results, are available here.