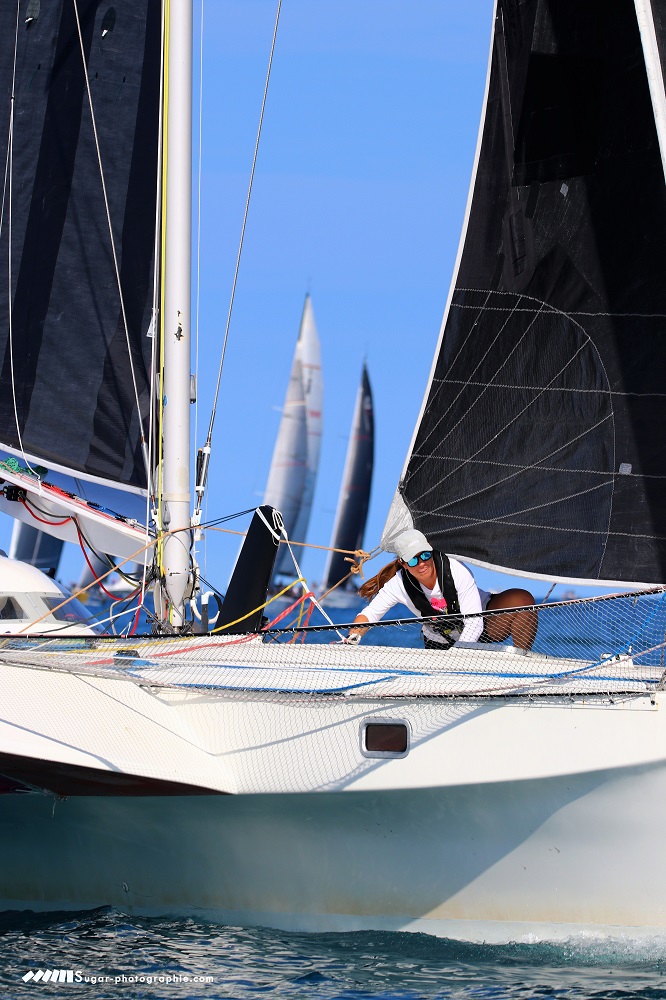 There are two new contenders for titles who are sure to rattle a few cages in the Multihull and IRC Racing divisions at the 2018 SeaLink Magnetic Island Race Week, hosted by Townsville Yacht Club and to be held from 30 August to 6 September.

New Zealander and double Olympian across two classes, Sharon Ferris-Choat, is bringing an all-female international crew, ‘Team Magenta’ (started by a group of high-profile women sailors, The Magenta Project’s mission is to accelerate women to the top of sailing), and a 40 foot trimaran up north to challenge all-comers in the in the Multihulls.

Ave Gitana is a Crowther 40 owned by Ferris-Choat’s friend, Antonio Pasquale, who not only encouraged her to do the 654 nautical mile Groupama Race with a female crew, but generously loaned her the trimaran. The women gave the multihull line honours winner, Drew Caruthers’ Rushour a shakeup, but ultimately finished second to it over the line.

Rivals be warned; Ferris-Choat is no stranger to multihull racing. She sailed with a mixed crew on British woman Tracy Edwards’ offshore catamaran, Maiden 2, to record-breaking performances. Then in 2016, the Kiwi became the first woman to sail on the multihull GC32 Racing Tour, mixing it with the some of the biggest names in pro sailing.

“Ave Gitana was quite the ride,” says Aussie crew member, Jo Breen. “It was a very challenging race with everything from 0 to 30 plus knots, lots of navigational and tactical decisions and a few big repairs,” the Tasmanian said.

“It was our first time sailing together as a team, and the first time for all of us racing on Ave Gitana, so we were happy with our result.

“I had a ball driving,” says Breen, who also filled the role of back-up navigator, her specialty. “Despite the serious lack of sleep, I don't think anything could have wiped the grin off my face driving at those speeds!”

One major hurdle out of the way, Team Magenta will arrive at Magnetic Island fresh from having done the 343nm Club Marine Brisbane to Keppel race and Hamilton Island Race Week, where they will undergo their first serious regatta-style practice. In other words, they should be in form.

“I’ll be doing both deliveries, and all the races with the team – we’re really looking forward to racing at Magnetic Island,” says Breen, who will be in Townsville shortly to recommence the delivery of her S&S 34, Morning Star back to Tasmania, after competing in the 5500nm Sundance Marine Melbourne Osaka Double-Handed Yacht Race.

Breen, who turned 29 during that race, and her co-skipper, Peter Brooks, finished the staggered start race second over the line. That result translated to fourth overall in IRC and second under PHS and AMS.

Meanwhile, Tim Campbell is bringing his Corby 25, Private Equity, from Victoria to for the 12th running of this ‘one-of-a-kind’ annual regatta at beautiful ‘Maggie Island’.

Keen for a little IRC jousting, because, Campbell says, “I haven’t raced in a while, busy with work,” the new kid on the block could be punching above its weight. It will be taking on the tried and tested muscled up models, including the Corby 49, Vamp, twot-time Hobart winner Balance and Miss Scarlet, frisky after taking line honours in the Groupama Race. It’s also rumoured a Corby 36 may also be entered shortly.

Private Equity’s UK designer/builder, John Corby has a different view: “It may be smallest IRC design, but its success has been phenomenal. The responsive, easily driven hull, with its narrow waterline, reduces the wetted surface to give the ultimate light airs performance.

“The deep fin keel and the 780 kilo bulb provide all the stability required in heavy airs when beating or running. Combine this with the efficient high-aspect rig, modest working sail area and large masthead spinnaker; it’s a fantastic all-round performer with boat-speed and upwind angles many larger cruiser/racers can only envy.”

Her owner, Tim Campbell adds, “This is the only Corby 25 in Australia and she was a competitive IRC racer in the UK and Wales.”

Campbell adds: “I haven’t sailed at Magnetic before – it’s been 10 years since I’ve sailed up north – at Airlie Beach Race Week, so it’s about time. I’ll be trailering the boat up to Townsville where Rosshaven Marine will crane the mast back into the boat for me.”

“Interesting times,” noted Event Chairman and Townsville Yacht Club director,Mike Steel. “Both boats are relatively unknown quantities at major regattas in Australia and certainly at ours, so we look forward welcoming them to our neck of the woods and to seeing them in action.”

For all information and to enter SeaLink Magnetic Island Race Week now, please go to the official website:  www.magneticislandraceweek.com.au/