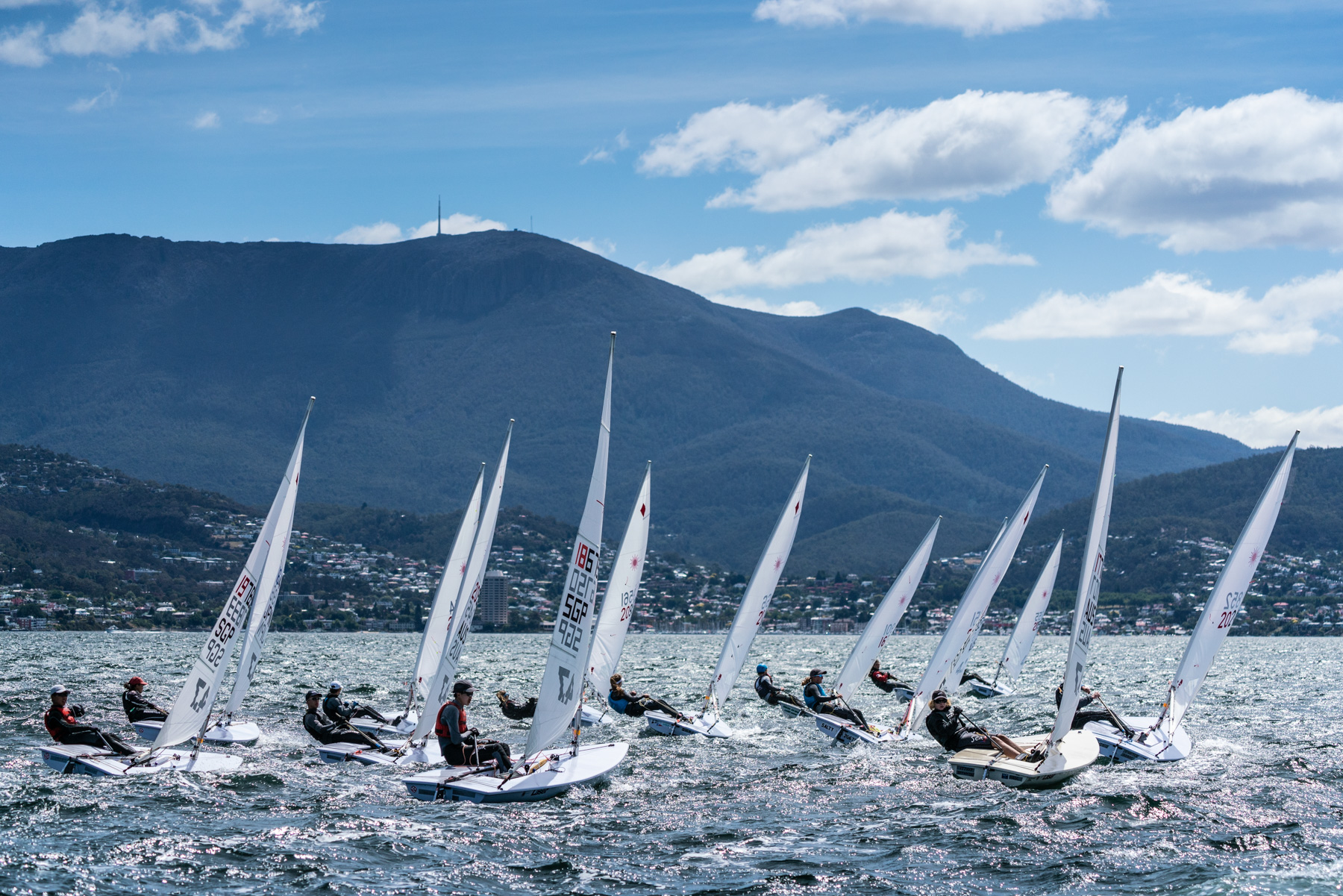 The best young sailors in Australia hit the waters of Hobart today for the second day of racing at the 2019 Australian Youth Championships presented by the Australian Maritime College, and in some classes, the elite sailors used the conditions to separate themselves from the field whilst other classes are locked in some remarkably tight and exciting battles.

One class where the elite has separated themselves is the Laser Radial, where Western Australia’s reigning world champion, Zac Littlewood, had his boat shimmying across the sparkling waters off Sandy Bay throughout the day.

Littlewood added two bullets and a third to go with his two bullets from yesterday, leaving the Royal Freshwater Bay Yacht Club and Fremantle Sailing Club young gun with a 5 net point lead heading in to day three.

There is a much tighter battle going on in the Girl’s division with Madeline O’Shea and Paige Caldecoat finishing the day 14th and 15th respectively. Australia will send only one boy and one girl to the Youth Worlds in Gdynia, Poland in July, and in this class, Paige is holding an advantage having finished ahead of Madeline at the recent Laser Radial Nationals.

After finishing third at the Nacra 15 National Championship, Western Australians Georgia Payne/Kai Colman are leading the fleet halfway through the regatta.

Colman was quoted as saying they are “hoping to continue our good performance here. The weather is all over the shop, so we’re really just trying to sail nice and fast and clean”.

Georgia continued by adding, “We are hoping to better our performances and stay on the podium for this Championship.”

Competition is extremely tight in the class, where they hold a slender two-point lead ahead of Ashleigh Swadling/Nathan Bryant from NSW, who themselves are just one point clear of recently crowned Nacra 15 National champions Will Cooley/Bec Hancock from the Royal Sydney Yacht Squadron and Woollahra Sailing Club.

Things are also tight at the top in the Boy’s 420, with Ryan Littlechild/Jack Ferguson from Woollahra Sailing Club and Royal Sydney Yacht Squadron finishing day two with their noses in front.

Jack said, “I managed to stay with the fleet and consolidate our losses. We’re really happy with how we sailed today.” They finished the day two points ahead of New Zealand’s current world champions Seb Menzies and Blake McGlashan.

Victorian twin sisters Matilda and Lily Richardson from Mornington Yacht Club are leading the Girl’s 420 fleet, and are currently ranked 10th overall in the class. Matilda said, “It was a pretty tough day fighting it out with all the boys. We’re hoping for a lighter wind tomorrow to push us forward in front of some of the boys”.

The 29er class was always going to be a hot contest and so it has turned out to be. The two top teams from Middle Harbour Yacht Club have continued their battles from the Nationals last week where Archie Cropley/Max Paul finished first and Lachlan Brewer/Flynn Twomey came in third. Half way through this regatta it is Brewer/Twomey just three points ahead of their rivals, but the former pair added a potentially costly 12th (drop) in the first race today.

In the Girl’s competition, the local crew from Sandy Bay Sailing Club of Alice Buchanan/Dervla Duggan lead the way, and are 10th in the Open competition.

Daniel Costandi is leading the race to be crowned National Youth Laser 4.7 champion, holding a 9 point lead from fellow NSW sailor Brooke Wilson. Brooke commented: “I am looking forward to just having a bit of fun out there, work on my starts, and hopefully get a good few keeper races in.”

Laser class sailors are wearing black ribbons in the memory of Jeff Martin who tragically passed away in a skiing accident on Friday January 11. Australian Sailing was saddened to learn the news and express our deepest condolences to Jeff’s family and friends.

Jeff’s loss will be keenly felt throughout the sailing community, Jeff having served as Executive Secretary of the International Laser Class Association for 40 years and played a major role in events such as Laser World Championships, where he worked since he was a competitor himself in 1974.

Follow all the Youth Championship action online at www.sailingyouth.org.au