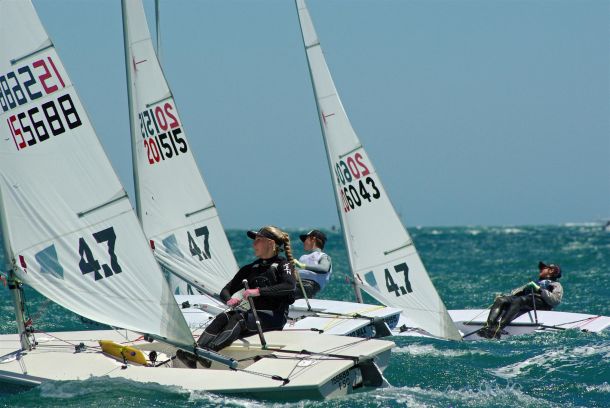 Tuesday dawned as an easier day on the water with 10 knots forecast out of the south west and it was so for the first race with the lighter sailors and the Masters reveling in the soft stuff. Despite that, there was very little change in the leader board as the race wore on. Just as the finish line loomed for the 4.7’s in the first race, the sea breeze came booming in, as if to say, “I haven’t finished with you yet.” With the racing notched up a few levels, it was a new day on the water.

In a consistent 20 knot sea breeze that you could only wish for and race officers dream about; the blazing battle between Tom Burton of New South Wales and Matt Wearne of Western Australia continued. Despite all Burton’s intentions of a straight run of bullets, on the last race on New Years Eve, Wearne broke back with a hard fought win. He stayed ahead in the down wind section including the fearsome reaches on the trapezoids and had enough in the tank to stay in front of Burton despite an enervating tacking duel as they fought to the finish line. This was a big win for Wearne, but afterwards he indicated that it was just a step on the way and the gold medal racing was still to be had.

In the Radials, WA reigns for the moment as Alistair Young continues to dominate yellow fleet with 6 wins and Tristan Brown in blue fleet had one race stolen from him by Conor Nicholas in the 5th race. These three hold the top positions in the radial division with Queenslander Ashley Stoddart at 6th holding top female position.

In the 4.7’s Victorian Brody Riley continues to hold the top spot with Caelin Winchcombe of WA moving up to second following consistent thirds on the Wednesday. Jordan Makin of New South Wales sits in third place comfortably ahead of Nicholas Bezy of Hong Kong. Zoe Thomson of WA holds the top female spot at 6th, no mean feat considering the strong breezes that have graced the course.

In the Masters and higher Gavin Dagley of Victoria holds top spot from WA’s Grant Lovelady both sitting in the top 20 in Standards; Mark Kennedy of Queensland improved his position from 12th to 10th in the radials and has WA’s Craig Hughes 16 points behind with a very pleased Dave Luketina of WA sitting another nine points behind him. Not bad for these Masters, all three in the top twenty so far.

New Years Day is the lay day for the fleet and the radials will be sorted out into gold and silver fleets shortly. It’s a welcome break from the racing and speaking to the sailors in general, the feeling was to use the day as a rest and restore period.

However, the mood of the Nationals is excellent and the consistently good breeze and superb weather is making this a memorable event. The next three days will bring an answer to the question…. Who are the best in the nation?