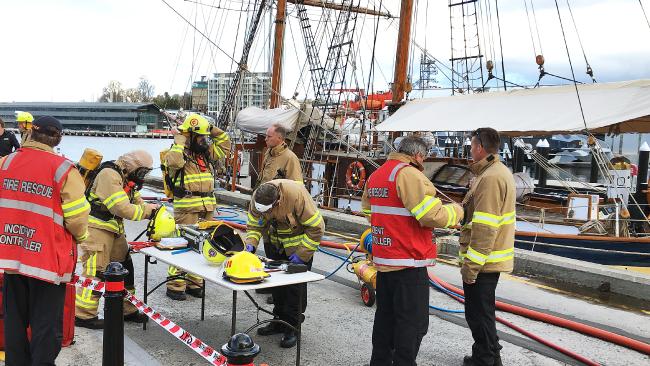 Firefighters at the Windeward Bound after a battery explosion caused a build up of gases in the hold. Picture: SAM ROSEWARNE/The Mercury.

By Patrick Billings of The Mercury.

A BATTERY has exploded inside the iconic Hobart tall ship the Windeward Bound. Emergency services were called to the scene early this afternoon to render assistance to the 33m vessel. A Tasmania Fire Service spokeswoman said it was believed the explosion did not cause any serious damage.

A Hazmat van and two heavy pumpers were on site at the Elizabeth Street pier for several hours. A commercial waste contractor was also called in to stop any hazardous material from entering the water.

People passing by reported a strong rotten egg smell — believed to be hydrogen sulphide — emanating from the ship.

Built in Hobart, the brigantine was launched 21 years ago. It provides sail training and leadership courses and is crewed by volunteers, some spending up to six months on board.

The Windeward Bound Trust has provided scholarships to more than 40 young volunteers, allowing them to gain maritime qualifications which have led to work in the industry locally, interstate and internationally.
See more images at The Mercury.