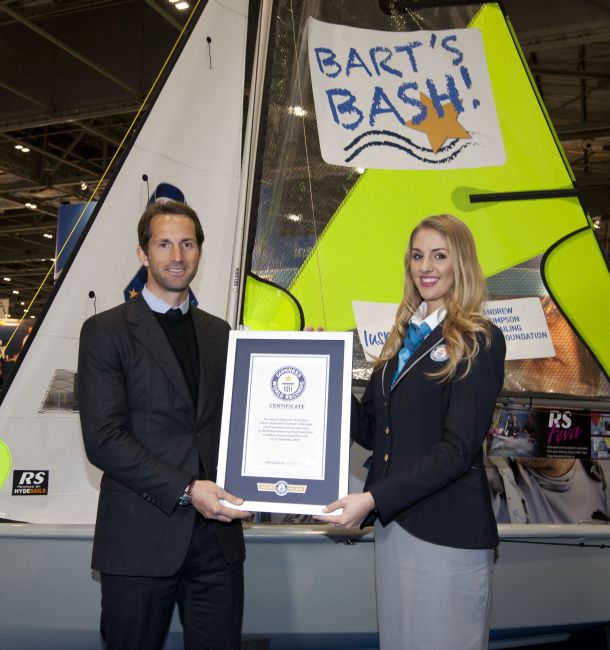 Sailing star Sir Ben Ainslie has accepted an official Guinness World Record Certificate for Bart’s Bash, the charity global sailing race that took place on 21 September 2014. It is now officially the largest sailing race on one day in the world.

Sir Ben is one of the founding trustees of the Andrew Simpson Sailing Foundation (ASSF) and accepted the certificate from Guinness World Record adjudicator, Elizabeth Smith, at a ceremony at the CWM FX London Boat Show at ExCel.

The charity was founded in memory of, and inspired by, Olympic Gold medallist Andrew “Bart” Simpson who died at the age of 36. Bart’s Bash was created both to remember the inspirational sailor and to raise funds for the charity’s work in sailing.

An amazing 9,484 boats at 237 locations worldwide provided evidence (video of start and finish and witness statements) which were then submitted by the team to Guinness to enable them to verify the record.

Sir Ben Ainslie commented “It’s a real pleasure to accept this certificate on behalf of the Foundation. No-one could have imagined how big the event would become. Initially we weren’t sure if we would make our target of 2,500 boats on the water. In fact it was nearly 10,000!
It is a real reflection of how much Bart meant to people across the world, and how sailing can unite people.”

Guinness World Records President Alistair Richards on the achievement: “It is a great honour to officially recognise the record title for Largest Sailing Race in 24 hours (multiple venues) achieved by Bart’s Bash, organised by the Andrew Simpson Sailing Foundation. It is testament to Andrew’s popularity and enduring legacy. The work the foundation does is a brilliant and fitting tribute to a man who dedicated his life to the sport he loved and always encouraged others to apply the same dedication in order to reach their potential. We at Guinness World Records share Andrew’s and the Andrew Simpson Sailing Foundation’s passion for encouraging people to work hard to achieve extraordinary things.”