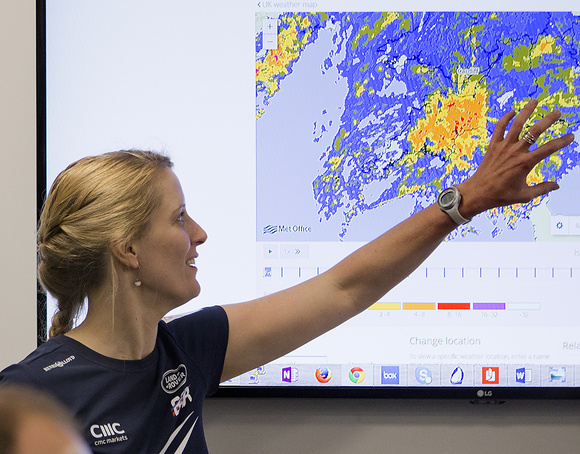 There are many parallels between Formula 1 and the new era of the America's Cup, and one of them is that crucial strategic and tactical decisions depend on accurate weather information. While F1 teams wrestle with the probability of rain and the need to change out of slicks, Land Rover BAR depend on accurate wind information to make the right sail selection.

The team member with the heavy responsibility of making that call is Chief Meteorologist, Jessica Sweeney, and it's perhaps no coincidence that she's the protégé of legendary Ferrari F1 and America's Cup forecaster, Roger 'Clouds' Badham. Sweeney's first big job was onshore navigation support for Camper with Emirates Team New Zealand in the 2011-12 Volvo Ocean Race – and she worked hard to get it.

“I flew everywhere so I could bump into Clouds, and I persuaded him to introduce me to Will Oxley the navigator, and then I went to Townsville to introduce myself to him. He offered me the job with Camper, and I also got offered a job with Puma at the same time… I went with Camper because I thought it would lead into the America's Cup and it did.”

Camper was run by Emirates Team New Zealand, where Clouds has been the meteorologist for a very long time, and Sweeney joined him in San Francisco for the 2013 America's Cup. It was the culmination of a long-term plan. She started sailing dinghies with her father in Fremantle – the Western Australian seaport that hosted the 1987 America's Cup. “I remember waving from the shore, but I was too young for it to be inspirational.”

Sailing became her passion nevertheless, and after completing a degree in maths and physics she briefly joined the Australian defence department to work on analysis of submarine capability, before leaving to sail full-time. “I realised I should be a navigator because I'm good at numbers.” She got into offshore racing and loved it. “Then I realised I needed to be good at weather and should do some training in it, and I thought I may as well do a Masters. I couldn't do it in Australia, so I thought I might as well go to the best place, which is Reading [university] in England. When I went there I realised weather wasn't just useful it was fascinating. I just loved it.”

As soon as she had completed her Masters, she set about getting a job with a professional sailing team, joining Camper and then Emirates Team New Zealand through to the end of the 34th America's Cup in 2013. Land Rover BAR found her back in Australia – where she had bought a house by the beach, was modelling tropical cyclones for an environmental consultancy, and thinking about a PhD – after Clouds recommended her to the team.

And so, whenever the Land Rover BAR sailing team heads out onto the waters of the Solent, Bermuda's Great Sound or Gothenburg, they do so forewarned and forearmed with the words of Jessica Sweeney. “Wherever we are sailing I do the morning forecast, and I issue that about 7.30, followed by the weather briefing at the sailing meeting at 9.30. During the day I keep on top of what's going on, and – when we're training – I give them updates every hour or half hour depending on how critical the day's scenario is. In the background I try and do all the other stuff, like the research, work for the design team, and building up my long-term tools and a lot of other background projects.”

Recently, one of those background projects has been researching the race course at the upcoming Louis Vuitton America's Cup World Series event in Gothenburg. So, Jess, what can the team expect in Gothenburg?

“At this time of year, the wind is most likely to be in the south to the west quadrant. The directions seem fairly consistent during August, but the strength could be anything from 10 to 25 knots. There are very few sea breezes this late in the season, because the water is quite warm. It's a tricky area because you have the archipelago islands off to the west of it, and to the east the mainland. So there's quite a lot of topographic effects around the race course – and it's a tiny race course surrounded by all these rocks.

“It's going to be a lot about boat handling, and some of the tactical options will be constrained because of the rocks, so you can't always play the weather. And then the current's tricky because you have a lot of fresh water flowing out of the river, mixing with salt water and so you get a lot of eddies. There are no measurements of any of this, so no one knows what's going on there.”

Uh-oh… and what's the weather looking like for the weekend we're all interested in, the 29-30th August?