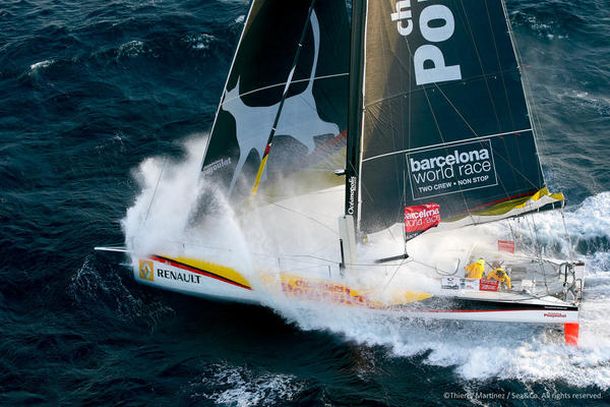 Barcelona World Race leaders Cheminées Poujoulat now have fewer than 10,000 miles to sail of the theoretical course back to Barcelona. The sub-tropical low pressure system which yesterday brought Jean Le Cam and Bernard Stamm 40 knot winds and 5m seas had today passed to the south-east, with winds abating to around 20-25 knot south-westerlies for much of today, before rebuilding to 30-35 knots tonight.

South of New Zealand, Guillermo Altadill and Jose Munoz on Neutrogena, currently in second place, has been determinedly putting in the miles to get to 52°S and into stronger westerlies. This afternoon as third placed GAES Centros Auditivos gybed north-east, the pair had just 110 miles lateral separation, and less than 65 separating them on the leaderboard.

“We are sailing really well now, downwind with 20-25 knots westerlies and we'll have some quite comfortable five or six days in moderate winds. Our goal is to be close, I'm not going to say catching up, because it will be difficult, knowing that Guillermo will push a lot, but we will try to keep the distance until the Atlantic, where there will be more tactical options.

“We know that if we need to push the boat we will be able to, but we now there is still half the race to go so we have to t ake care of our materials.

Less than 250 miles further back in fourth, Renault Captur discovered they had suffered rudder damage, mostly to the outer skin of the starboard foil. Sebastien Audigane explained today how he and Jörg Riechers managed to effect a quick repair:

“Obviously we had hit something, but we didn’t realise at the time, we didn’t hear anything, and the boat remained on a stable heading …We decided to do our repair with the “sock” [cover] right away. So it was hands on: we took the second reef, headed upwind, released the keel, took down t he gennaker and J3, and tacked upwind. We put ourselves head to wind, and with the mainsheet tied under the mainsheet. Then Jörg, attached by his harness, took off the rudder locks that were keeping it in the down position, and then we raised the rudder. It was really damaged, and it was necessary to cut a bit of it and to take off the broken fibre then put a new “sock” in place.

“It was perfectly fixed around the blade, the “sock” was attached by lashing on top of the rudder. We did it all in just two hours, having lost only 30 miles.”

Fifth-placed We Are Water have maintained such consistent pace in relation to the leaders overnight that they are within 5 miles of their position yesterday afternoon, albeit over 2,500 miles behind Cheminées Poujoulat

Sixth boat One Planet One Ocean Pharmaton crossed Cape Leeuwin just before 2029pm last night. Both they and Spirit of Hungary were averaging over 14 knots over the course of this afternoon. Conrad Colman on Spirit of Hungary reported that he and Nandor Fa were enjoying the opportunity to see what Nandor’s personally-designed IMOCA 60 was capable of:

Although the pair have their sights firmly set on One Planet One Ocean, some 700 miles ahead, Conrad is also relishing some of the more traditional elements of six weeks at sea, commenting today:

“I think I’ve had only two or three phone calls with my fiancé during this time, so we talk very infrequently, but it’s lovely to be forced almost to write letters and to really think about the communication s that we have with my family and my loved ones. It goes back to an older time when people actually thought about what they wrote, instead of just sending instant text messages.”

As for downtime, he answered: “We sail the boat! That’s what we’re here to do. We’re being really attentive to the trim, and to the stacking, where the boat is. But also now I’m taking more time for maintenance jobs, so I’m redoing the splicing on the backstay, and I have quite a lot of time to invest in it and time to do a nice job. It’s kind of like the old sailors and old whalers who would spend hundreds of hours engraving the tooth of a whale for example, with a picture of a boat. It’s nice to be able to have the time to work with our hands.”