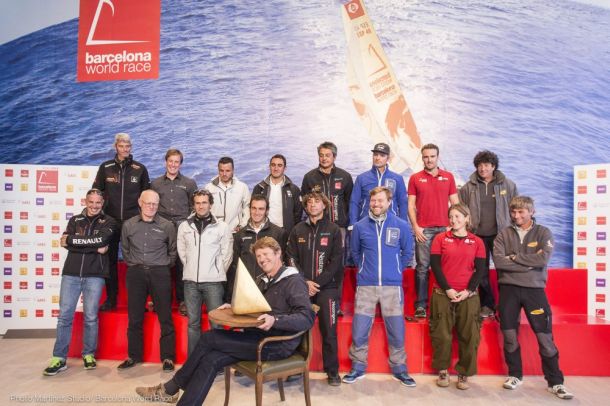 The first trilogy of the Barcelona World Race has just ended, the third edition completed only days ago. Over the first ten years the race has fostered the growth of oceanic racing whilst making a comprehensive, positive cultural and social impact through the educational and scientific programmes, which are integral to the two-handed race around the world.

Now the second trilogy of the race is set in motion. The organisers of the Barcelona World Race, the FNOB, and the IMOCA – the International Monohull Open Class Association, have signed an agreement for the Barcelona World Race to continue as a key event on the ocean racing calendar for at least three more editions, consolidating the Catalonian capital city for twelve more years as a reference centre in this sport.

The relationship between the IMOCA class (which includes more than 30 different international skippers racing IMOCA 60s yachts) and the FNOB spans ten years now, with three completed editions of the Barc elona World Race.  This new agreement confirms a strong future for the double handed around the world race. Each previous edition has been the subject of a new contract at the end of each race. This longer-term agreement, encompassing three editions over twelve years, is designed to foster continuity and to consolidate future plans for the class and for the city.

With renewed confidence in the long term, IMOCA and the FNOB can focus on planning the race and making future improvements, perhaps looking at the route and the schedule on the IMOCA Ocean Masters circuit. The scientific and educational programmes are considered part of the event's DNA now and are regarded as essential elements of the Barcelona World Race.

Signing for three more editions should strengthen and facilitate improved planning and execution of sponsorship seeking and management, allowing ambitious long-term strategies, now to be developed. The door is opened to more stable relationships with spon sors, and to title sponsorship too, so helping reinforce the future of the Barcelona World Race.

The agreement further strengthens the twin peaks of the IMOCA Ocean Masters circuit – highly challenging round the world races – along with other classics like the Transat Jacques Vabre and the Route du Rhum.

Innovations in design rule IMOCA 60 boats such as foils, with new and faster boats, some of them already thrown, and others under construction, let anticipate a high international participation with interesting novelties in future editions of the race.

The contract was signed by the President of IMOCA Jean Kerhoas and the CEO of the FNOB, Andor Serra, along with the Delegate General of the IMOCA Gaëtan Gouérou and General Secretary of the FNOB, Jordi Cases.

Kerhoas stressed the values of the Barcelona World Race: “The Barcelona World Race has clearly extended its reach and interest well beyond pure sport to now encompass wider society. It develops strong educational programs and active collaborations with ambitious scientific research projects, fully involving the skippers, in partnerships with renowned major institutions such as UNESCO. This excellent work in organizing and delivering a broad-spectrum event in this Barcelona World Race makes us fully endorse a future for this race.“

Andor Serra said. “We thank the IMOCA for recognising what Barcelona has achieved; creating and delivering a race of this nature at the highest level. This new agreement is recognition of the great work of the team of professionals from Barcelona, which have worked on the organization of this event. Over these first three editions a culture, knowledge and love for this great adventure and for ocean sailing has grown, and we have developed and inspired a large group of sailors from here.“