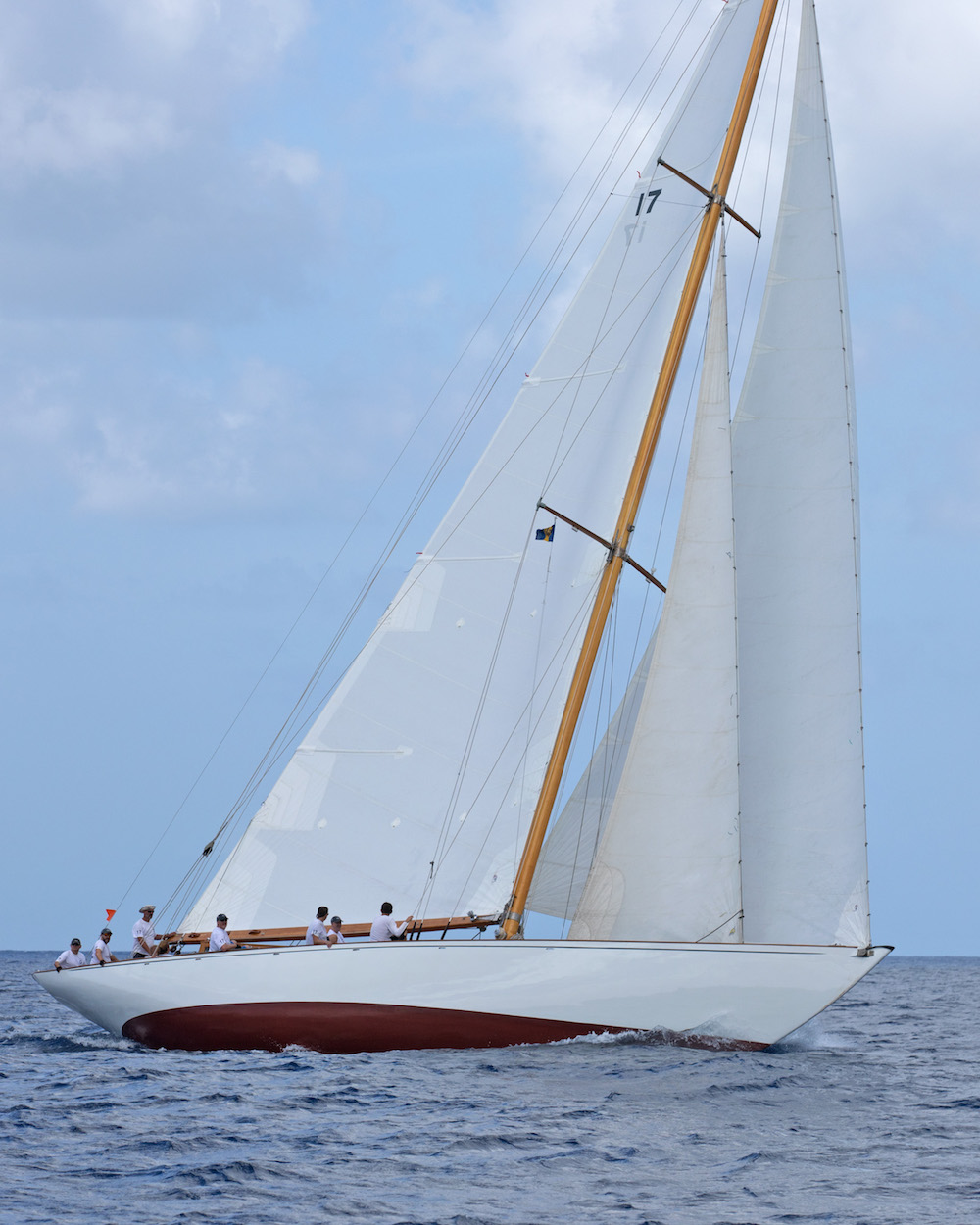 Bridgetown, Barbados (17 January, 2018): Glorious conditions with up to 18kts of breeze and accompanying swell made for an exciting day on the water for the opening day of the three-day Coastal Series at Barbados Sailing Week writes Sue Pelling.

With the wind and swell from the east, competitors enjoyed a 11-12nm course from Carlisle Bay and were back on shore this afternoon in time to relax, rest their weary limbs and enjoy the delights the local hospitality provided by the organising club – Barbados Cruising Club, and Barbados Yacht Club’s Boogie on the Beach Party.

Racing throughout the day was close and it was a delight to see such a varied mix of yachts taking part, which ranged from windsurfers and an International Moth to the 65ft Alfred Mylne classic, The Blue Peter.

It was a day where the emphasis on good teamwork paid dividends and this was particularly noticeable in CSA Racing Class where the super-tuned crew on Peter Lewis’ J/105 Whistler fought hard to earn their first top spot of the week. After what was probably the best start of the day, team Whistler sailed well in the tricky conditions and although they seemed to struggle with speed on the first downwind leg, they were able to comfortably hold off The Blue Peter, who had to settle for second place in class.

Another impressive performance was in Non CSA division with Mandy (Hunter 29.5) sailed by Bruce Robinson and team who seemed keen to start the week how they intend to continue. After an exceptionally close class battle last year when they were unable to hold off their closest rival Tropic Bird (Hunter 35) sailed by Mark Hioens and Priscilla Richardson, they were on top form today with a first race win. As well as Tropic Bird, who was four minutes late for the start today, Robinson and team are going to have to watch Bill Tempro’s Hunter 36 Sail La Vie who was also on form and finished the day in second place, one place ahead of Tropic Bird.

Robinson talking about his win, said: “It was undoubtedly down to good crew work. They [the crew] worked exceptionally well despite being one member down. I was also impressed with the boat’s performance after my recent boat tuning session where I made a few adjustments to the jib settings. Tomorrow’s course on the west coast will make for an interesting race and I imagine Tropic Bird and Sail La Vie will be ‘on our case, which means, as a team we are going to have to ‘sharpen our pencils’”.

The conditions made it tough work for smaller classes but there was still plenty of fun to be had as demonstrated by Andy Budgen who was racing his new Exocet foiling International Moth Nano Project. Although he won his class, it was not without a few issues. “Today’s conditions were not ideal for me and I have to be honest, I was so off the pace. I am hoping I will improve as the week goes on.

“From my perspective flat water is everything, so in conditions like it was today it pays for me to come round the marks and head inshore immediately because the chop is hard to sail in, and not that fast. The biggest thing I had to do today was to try to slow down. As I came round the top mark it was all I could do to sheet in to slow the thing down. It was going about 25kts downwind but I got it down to about 16kts just to try to stop the thing taking off because that can only results in one thing ‘death’!”

Slightly less frantic but no less exciting was the sole multihull Silver Bullet (RC30 catamaran) – Bryn Palmer and team who zipped round the course at top speed and took their first win of the week in the Multihull class.

With the sun setting across Carlisle Bay and sounds of the Caribbean beat from beach party at Barbados Sailing Club echoing out to sea, there is no doubt this Mount Gay Rum-fuelled regatta is living up to its seriously fun legendary reputation.

Racing will continue tomorrow for Coastal Racing Day 2. The course will take the fleet up the west side of the island towards Holetown where, although potentially shifty, should be relatively flat.