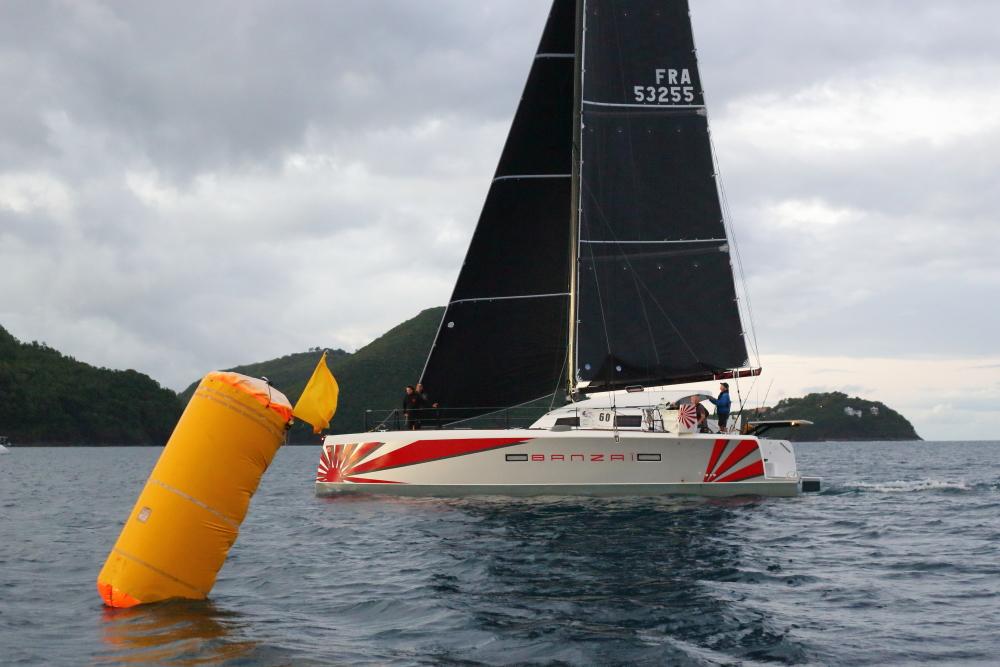 Banzaï crosses the line in Rodney Bay at 06:03:52 local time on Thursday 3 December

04/12/2020
Rodney Bay Saint Lucia, Thursday 3 December 2020
As daylight dawned in Saint Lucia on Thursday 3rd December, the first arrival of ARC 2020 sailed gracefully round Pigeon Island for the final mile of the Atlantic Crossing that began in Las Palmas de Gran Canaria on Sunday 22 November. It was an imposing sight as the stunning Marsaudon TS42 Banzaï crossed the line in a moderate offshore breeze of around 10kts.
Claiming a new Multihull Record for the ARC course, Banzaï blitzed across the Atlantic in just under 11 days to cross the line in Rodney Bay at 06:03:52 local time today, giving her an elapsed time of 10d 21h 3m and 56s and sailing 3090.7 nautical miles. The all-Belgian crew on board, skippered by Vincent Willemart, were delighted and their cheers echoed around the bay. They were presented with the customary Saint Lucian rum punch and a bulging basket of local produce as applause rang out from the ARC Rally Control Team.
Once their sails were lowered, Vincent was able to say a few words. “We had a fantastic crossing and the ambiance on board the boat was also fantastic. All six of us are very good friends and we were a good crew together.”
He also went on to praise his boat, “She was very quick, sailed so well. We had no breakages and cherry on the cake was being able to race against Jean-Pierre giving them a challenging race.”
The crew went on to thank the ARC organisers for all the great work. He said “We are only sailing, you have to do all the organisation!” as they enjoyed their rum punch with big smiles on their faces.
It has been an exciting battle to the finish line this year after a transatlantic match-race of over 3,000 nautical miles between mono and multihull. From the day that the fleet set-out from Gran Canaria, right until the last few hours, it has been a close run thing, with two yachts each hoping to squeeze ahead and gain line honours.
Vitali the Kid, sailed double-handed by renowned French racing helm, Jean-Pierre “JP” Dick and Fabrice Renouard, had led for most of the crossing, pulling out an early lead on day one. Close on their wake, almost matching them gybe-for-gybe in this battle of carbon racers, the six-man crew from Belgium on Banzaï chased them down. However, it was only in the last 24 hours as both crews focused on the final 200NM, that the light-weight 42ft catamaran pulled ahead of the larger JP54 monohull, to arrive a little over an hour ahead of their French rivals, and recording the fastest crossing for a multihull in the ARC.
JP Dick, something of an ARC veteran, having now sailed in three consecutive ARCs, has proved yet again that his JP54 is a quick boat, shaving more than 6 hours off his previous best performance from 2018. The numbers this year prove what the weather forecasts have been showing each day, that 2020 has been an excellent year for tradewinds, giving consistent ENE winds for almost the entire route. Whilst not quite strong enough for the racers to break records, it shows that constant fair winds make for fast passages.
The next boat expected to cross the finish line is Immagina from the ARC+ fleet, sailing their course from Mindelo, Cape Verde on the two stage route. With less than 75nm to go, Donato Paradiso’s G-Force 1500C multihull is expected at approximately 21:00 local time this evening.
Today’s first arrival is a special moment as it officially kicks off the ARC’s annual presence in Saint Lucia. In a year of so many disappointments it is tremendous to see the fleet realising their ambitions to overcome so many obstacles during the run up to the start, and now to enjoy all the magical delights of ocean sailing.
As the crews of Banzaï and Vitali The Kid reflect on their charge across the Atlantic and enjoy the Caribbean sunshine, the welcoming party, complete with rum punch and steel pan playing, look forward to celebrating with the rest of the fleet as they sail over this finish line.