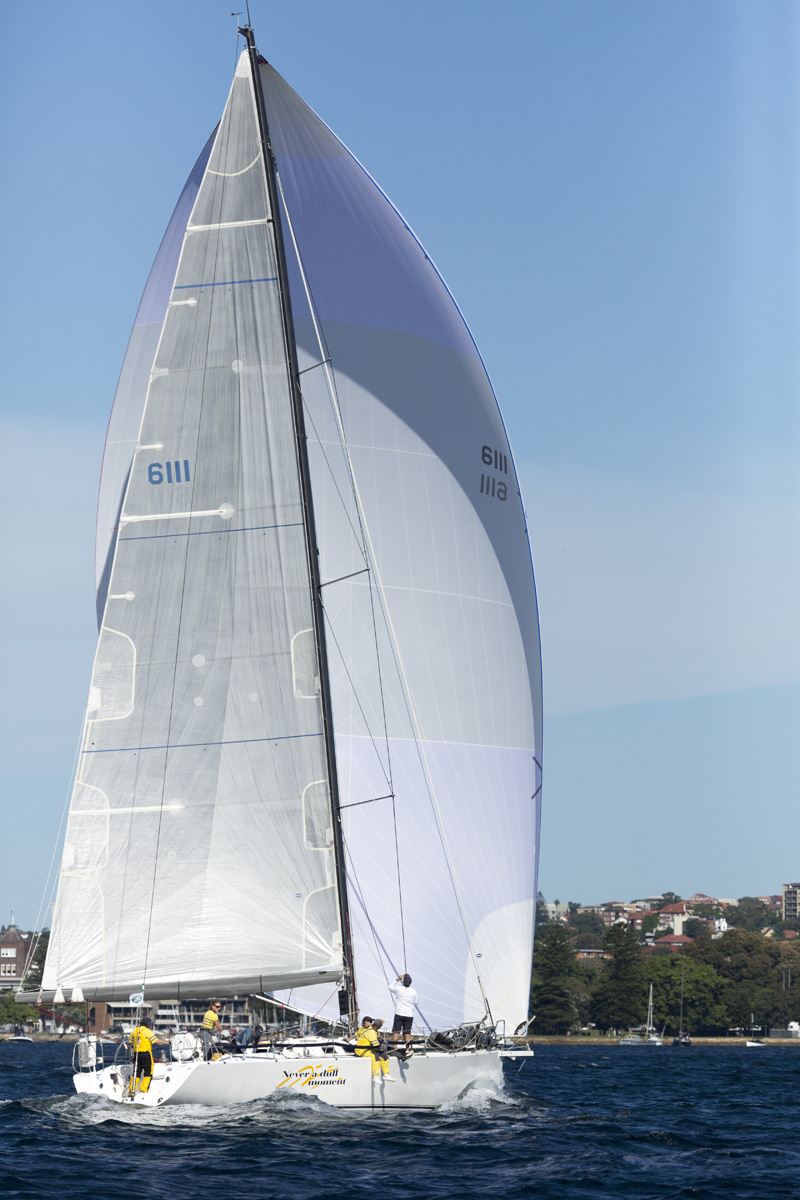 Paul Clitheroe’s TP52 Balance took line honours and won the Lion Island Race by nearly 13 minutes, but lost the series on countback to perpetual Ocean Pointscore winner, About Time (Julian Farren-Price) – the two crews celebrating back at the Cruising Yacht Club of Australia late on Saturday.

About Time has now won an astounding 10 series from 13 attempts (five of them successively) missing out by one point last year to Midnight Rambler. Her owner, Farren-Price heaped praise on Clitheroe and their fellow competitors.

“Balance got to the Island in one hour 10 minutes. They topped out at 23 knots running north and we got up to 17. It’s great to have Paul competing. In fact we’ve thoroughly enjoyed all the competition this year,” the modest Sydney jeweller said after finishing the final race of the series fourth overall behind Balance, The Goat (Sebastian Bohm/Bruce Foye) and UBS Wild Thing (Geoff and Pip Lavis).

“I truly have to thank my crew. Some of these guys have sailed with me for 17 years – they know the boat like the back of their hands. I’d go offshore anywhere with these guys, they are so good,” Farren-Price commented.

Clitheroe, who won the 2015 Rolex Sydney Hobart Yacht Race, was happy to win the race, which translated to winning the ORCi component of the series overall from About Time (reversing the trend of last year) and The Goat. Colin and Denise Wilson’s Never a Dull Moment won PHS overall from Balance and About Time (the latter two also reversed their results of last year).

“Julian and the guys deserved to win; they always do a good job. I’m so pleased for the Wilsons too – they are such troopers,” Clitheroe said.

“The best part of our day was the two young guys we took along. They have a 420 named Balance – turns out they are fans of our Balance – and a miniature version of our logo. I saw it in a magazine and invited them along for the race. They went from little Balance to big Balance,” Clitheroe said.

“They loved it. It’s fair to say they had a blast, but they thought ocean racing was easy until the squalls hit and the torrential rain came,” Clitheroe said of gun Victorian 420 sailors, James Hackett and Ethan O’Brien, whose dad Matthew also joined them for the race.

Shortly after the start, Principal Race Officer Robyn Morton commented, “We got them away on time at 10am in a 15-16 knot southerly. We saw a few bigger squirts too. It should be a fast ride up to the Island, but it’s lumpy offshore, so it will be slow going on the way back.”

The morning weather did not hold much promise, and downpours and rain came and went in bursts, but blues skies and the sun put in a short appearance.

Farren-Price said it was an interesting race. “We set a Code Zero and flew to the island. You needed a Code Zero. Coming back was especially lumpy – it was hard to keep the boat straight. We had some rain squalls with rain in front. It was eerie at one stage, 20 knots in the squalls but the sea was glassed out and we felt like we weren’t moving at all.

“It was one of the wettest races we’ve sailed too, but we had a great run down the Harbour to the finish,” he finished.

Clitheroe agreed: “It was torrential – like Bass Strait at night racing to Hobart. I’ve never seen anything like it.”