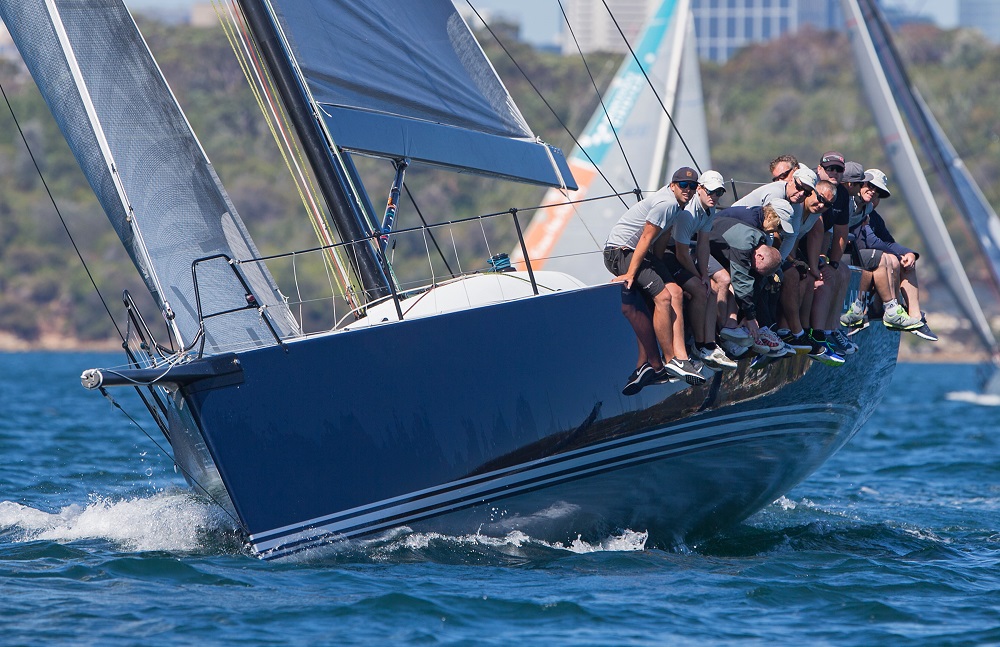 Balance was in the winner's circlue---Crosbie-Lorimer-pic

A two-time Sydney Hobart winner is on her way to SeaLink Magnetic Island Race Week for the first time, her owner ahead of the game when online entry into the Townsville Yacht Club hosted event opened.

Paul Clitheroe is bringing his racing crew and the TP52 variously known as Balance and Quest to Magnetic Island. Overall winner of the 2015 Rolex Sydney Hobart and other major events, the ‘Money Man’ is nevertheless a greenhorn as far as ‘Maggie Island Race Week’ is concerned and he is looking forward to being introduced to the delights it has to offer.

“Quite a few people have told me I’m missing something special – Darryl Hodgkinson, Bob Steel and others – so Magnetic Island here we come,” the effervescent Clitheroe said.

Steel was the original owner of the boat, naming her Quest and winning the 2008 Sydney Hobart. These days the two share the boat like adoring parents, Steel sailing her to second place overall in the 2017 Hobart. Now she has reverted to her Balance colours and ready to head north.

Sydneysider Clitheroe is forthright as to his motives for competing: “Firstly, I haven’t sailed there before and secondly, sailing in Northern Queensland is always, well, wonderful.  I heard this is a fun and relaxed regatta and as you know, Balance has one of the most laid back crews, so we’re looking forward to it.

“We are sailing somewhere completely new and we’ll be trying hard, but winding down at the same time. Vicky (his wife) is coming along too. It will be a nice way for us to relax – staying at Peppers – and it just sounds like a good thing to do,” he says of the regatta to be held from 30 August to 6 September, the grand finale of the northern circuit of races for the year.

Clitheroe wasn’t the only one to jump the gun early, so to speak. Eight others have also entered the SeaLink Spinnaker Class, including Toni Fox’s Xena from NSW. Her owner launched the Jeanneau Sun Odyssey 349 just this February.

Berthing is at a premium, so entering early will avoid disappointment, because the cat is well and truly out of the bag about this event.

Mike Steel, Director of Townsville Yacht Club, competitor and Event Chairman, says, “We’ve already had quite a number of early enquiries, so I suggest prospective competitors enter as quickly as they can. In a first, when you enter online, you will also be confirming a yacht berth for the week – making it a simple one-step operation.

“While entering, I suggest booking accommodation at the same time to take advantage of the best Peppers Blue on Blue Resort has to offer,” he said of the various options available from waterfront apartments to rooms – all taking in the beautiful surroundings.

Peppers Blue on Blue Resort is offering an Early Bird special of 10 percent discount on their Peppers Bed and Breakfast rate (with various accommodation options available), including one welcome beverage per person. Secure the special rate by booking directly through the resort before 30 June 2018. Phone: (07) 4758 2400 or email blueonblue@peppers.com.au

“We’re looking forward to welcoming all to SeaLink Magnetic Island Race Week again and to hosting another wonderful Cape Upstart stopover pre-regatta for those yachts travelling up,” Steel ended.

In its third year and held the afternoon and evening prior to the main event, the Cape Upstart stopover’s reputation has grown so quickly that numbers escalated to almost double in 2017. And why not? It is a completely unique place and experience – the perfect way to start the week off and to meet and socialise with fellow entrants.

Accessible by water only, yachties only need to throw out the pick and are ferried ashore to be greeted by Richard and Karen Bonato, who kindly host and cater this BBQ event for the Club. The couple opens their home to welcome yachties – happy to share their piece of paradise and meet competitors.

Don’t miss this special sailing occasion – it’s unlike any other.